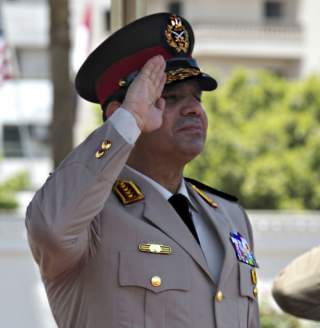 The lamentable circle that brought the military back to power, despite the hopes raised in 2011, risks being replicated in the future. The problems that led to that uprising continue to fester and will not be solved easily. With avenues to political participation closed by the new regime, discontent could easily lead to a new upheaval, followed by renewed fears of radical change and, again, acceptance of authoritarianism. To avoid a repeat performance, the government needs to reopen the political space for moderate, secularist parties and organizations of civil society immediately, so they can become an effective counterweight to the Islamist organizations that at some point will themselves have to be allowed back into the political system.

Change and the Fear Factor

The renewed acceptance of military rule and authoritarian politics in Egypt is not the result of a peculiar Arab aversion to democracy. Rather, it is a common phenomenon—the typical reaction by elites in power and middle classes that have found a precarious niche in their country’s system to changes that threaten their interests. It is the same reaction that explains popular support for the rise of fascist regimes in Europe, the return of military dictatorships in some Latin American countries after periods of democracy and more generally, the failure of many attempted democratic transitions. The consequences of political openings in all those cases became threatening, even to those that advocated the change.

The 2011 uprising was not a revolution, as many Egyptians like to think. There was no project of far-reaching political and socioeconomic transformation on the part of most of those who participated in the demonstrations, and even the leaders did not appear to have a vision for a new society. Nevertheless, the uprising triggered a chain of events that potentially threatened the vested interests not only of a few people at the top, such as the Mubarak family and its close business associates, but of a much larger stratum of professionals and bureaucrats.

When the free parliamentary elections of 2012 gave 70 percent of parliamentary seats to the Muslim Brotherhood’s Freedom and Justice Party and other Islamist parties, and Mohammed Morsi—a Muslim Brother—became president, the old, largely secular elite that ruled Egypt feared it would be replaced by Islamist upstarts.

The array of people potentially threatened was large: the top layers of an extremely well-entrenched bureaucracy; a stratum of well-educated secularists that was critical of the Mubarak regime, was dissatisfied about the lack of individual freedoms and the paralysis of the political system, but ultimately was comfortably ensconced in the professions, the universities and the media; and a business community that had benefited from the liberalization of the economy promoted by Mubarak and, above all, his sons. Many, possibly most, of them genuinely wanted some change—as long as it did not threaten them. And below this professional stratum, was a much larger layer of Egyptians worried by instability and continuing economic stagnation and ready to blame it on the Muslim Brotherhood as they had blamed it on Mubarak earlier.

The Muslim Brothers were clearly a political threat to the old secular elite. They had much greater capacity to mobilize popular support, as seen by election results. Socially and culturally, they were an alien group. True, many of their leaders were highly educated, including in the universities of Western countries where they favored degrees in medicine, science and engineering over the liberal arts. Education did not keep them from being looked down upon as ignorant by much of the old elite. Their culture and values were different. They were part of another social milieu and engendered apprehension even before they had done anything.

The issue of women rights is revealing in this respect. During their brief tenure in office, the Muslim Brothers did nothing that affected the position of women in the society. They passed no new laws, imposed no new limitations. True, women continued to face many problems, but they did so under Mubarak and do so under al-Sisi. Nevertheless, secularists invariably denounced the curtailment of women’s rights as if the Muslim Brotherhood had been acting like the Taliban, raising the specter of what would happen to women under the continuing rule of the Muslim Brotherhood.

This is not to say that Muslim Brothers did not bear any responsibility for the fears they engendered. With no previous government experience, they were not well placed to run the country. Their policies were uncertain, with rash announcements and sudden reversals. Decisions were taken not just by officials in government positions, but also by the Muslim Brotherhood guidance bureau, which should not have had a governing role. Muslim Brothers were appointed to high positions in the ministries, leading to accusations that Egypt was being “brotherized.”

But an overall assessment of the period when the Brotherhood was nominally in power leads to the conclusion that the organization really controlled very little. It had no authority over the military and the police. For every Brotherhood member placed in a high position in the bureaucracy, there were dozens appointed under the thirty years of Mubarak’s rule and deeply opposed to the new government. The judiciary was hostile and dissolved the parliament within a few months of its inauguration. And Morsi was president for only one year, much of the time amidst demands for his ouster.

But the fears of what might happen were genuine, although not entirely spontaneous; by fall 2012, the media was engaged in a relentless anti-Morsi campaign. As a result, many Egyptians applauded the military coup carried out in July 2013 in the wake of massive demonstrations that the military and police had helped organize. They continued applauding in the following weeks as the new government brutally dispersed Muslim Brotherhood protesters, and then proceeded to arrest thousands of Islamists, as well as any other Egyptian daring to protest against the new regime. In April 2014, voters elected by an overwhelming majority the coup leader, the newly retired Field Marshal Abdul Fattah al-Sisi, as their next president.

But tensions remain. Although public protest has practically ceased except on university campuses, the government does not trust public gatherings—it even limited public celebrations of al-Sisi’s inauguration. But by and large, Egyptians seem to have settled down to an apathetic acceptance of the military-backed regime.

Democratic processes such as free elections had simply proven too dangerous. For those who live in stable democratic systems, the superiority of democracy over other political systems appears self-evident. For those who experience the disruption caused by transformation and the threat to their personal position, democracy and its advantages are at best a long-term hope, while the problems are immediate and real. And the larger the number of people threatened by the transformation, the more broad-based the resistance to change is going to be.

Democratization, Socialism and the Rise of Fascism in Europe

I have drawn a parallel earlier between the Egyptians’ acquiescence to a new authoritarian, military-backed regime and the acceptance of fascism in many European countries in the 1920s and 1930s. By drawing that parallel, I am not implying that the new regime of Abdel Fattah al-Sisi is a fascist regime. While some of its adversaries do denounce it in those terms, this is a meaningless accusation, as was the accusation of fascism directed against Morsi. Used accurately, the word fascism denotes not just an authoritarian regime, but a political system with ideological and political characteristics not found in Egypt either under Morsi, or under al-Sisi. Used loosely, the word is just a political insult.

But there is parallel between the reasons that led many Europeans to accept fascism and those that led Egyptians to submit willingly to a new authoritarianism. The drive toward liberalization and democratization in Europe after World War I took place under very difficult circumstances, as did the attempted transformation in Egypt after the uprising. The liberal political parties that carried the demand for democracy were weak, and the governments they led were unstable and ineffective—this was true in Italy, Germany and Spain, for example. These weak liberal political forces competed against socialist ideologies, which had a more powerful appeal to war-impoverished populations than the more abstract ideals of democracy. The success of the October Revolution in Russia added to the appeal of socialism. As a result, democratic elections, which had initially led to the formation of liberal governments, were playing in the hands of socialist parties. This terrified elites and middle classes alike into accepting fascism and its promise of order and stability. By the time people understood that this is not what they were getting, it was too late.