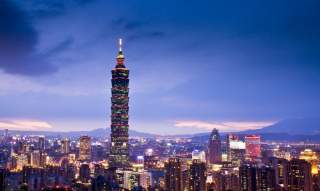 On May 20, in its third successful transition of presidential power between parties and best sign yet of a mature and stable democracy, Taiwan inaugurated its new president, Tsai Ing-wen. To the consternation of Taiwan’s electorate—and under the radar of much of the rest of the world—President Tsai’s inauguration speech has triggered a significant escalation of Beijing’s non-kinetic “three warfares” campaign against the island. Beijing’s clear goal in using intense economic, legal and psychological pressures—the three warfares—is to bring it to heel.

Over the last week, I met with a variety of government officials, business leaders, politicians, academics and journalists in Taiwan to discuss a situation that is far more serious than is being reported in the western press. In a three-part series for the National Interest, I will look at the economics, politics and policy implications of the escalating cross-strait crisis.

The economic situation is important not just because Taiwan’s weak economy makes it highly vulnerable to pressure from its major trading partner. Slow GDP growth and attendant zero wage growth are also prime movers behind the landslide victory of a new president offering Taiwan’s citizenry the hope of a national Taiwanese identify, a continued de facto independence from China and a decoupling of Taiwan’s economic fortunes with that of the mainland.

Taiwan in the Crosshairs of Globalization

Current GDP growth in Taiwan is in the range of 0.5 percent to 1 percent, and this growth rate is likely to fall over the next year into a flat to recessionary pattern. While the unemployment remains low at around 4 percent (albeit a bit high by Taiwan’s historical pattern), income growth has flat-lined over many years now with little prospect for improvement.

Taiwan’s economic woes do not reflect a short-run cyclical phenomenon amenable to the kind of Keynesian stimuli recommended in the standard macroeconomic textbooks. Rather, this is a long-term structural problem associated with the offshoring of Taiwan’s production and the broader forces of globalization. In Taiwan’s case, however, its economic malaise is also being severely exacerbated by the economic warfare Beijing is now waging.

On the globalization front, Asia has witnessed three waves of offshoring. In the initial wave from the 1960s through roughly 1990, both Europe and the United States (as well as Japan in the later part of this period) began to offshore their factories in search of cheaper labor, lax environmental regulations and potential new markets. As part of the “Four Tigers” that also included Hong Kong, Singapore and South Korea, Taiwan benefited directly from such foreign direct investment and transfer of technology; and during this First Wave period of offshoring, it experienced rapid income growth as well as robust GDP growth rates. These were indeed Taiwan’s golden decades.

The Second Wave of offshoring began in the 1990s and accelerated in the 2000s as much of Taiwan’s new capital investment moved to foreign shores, principally China. While Taiwan’s business interests captured great riches from this Second Wave, thus began the steady erosion of Taiwan’s manufacturing and jobs base and the concomitant fall in the Taiwan’s GDP and downward pressure on wages and income growth.

A key strategic mistake made during this period, particularly during the 2008–16 term of President Ma Ying-jeou, was to ignore diversification and effectively hitch Taiwan’s economy to the Chinese wagon. Today, 40 percent of Taiwan’s exports go to China while its critical tourism sector depends heavily on mainland traffic. This is problematic for two reasons.

First, China’s economy has downshifted significantly over the past several years from its thirty-year reign of double-digit GDP growth, and this slower growth appears to be the “new normal.” Taiwan’s export trade is suffering accordingly, and the long-term outlook is not reassuring.

Second, Taiwan’s heavy reliance on China trade has made it exceedingly vulnerable to precisely the kind of economic warfare now being waged by Beijing’s hard liners. The abiding fact here is that since President Tsai Ing-wen was inaugurated on May 20, China has not just cut many of its diplomatic lines of communication—including the “hot line” between Beijing and Taipei. It has also cut trade in selected sectors such as tourism, fishing and farming. Here, it should be noted—and it was by many of the government officials I talked to—that Beijing’s economic quotas and embargoes are highly sophisticated in their targeting and designed to apply maximum political pressure to the ruling party.

In her acknowledgement of Taiwan’s Chinese trade dependence, President Tsai announced in her inaugural address a “New Southbound Policy in order to elevate the scope and diversity of our external economy, and to bid farewell to our past overreliance on a single market.” Tsai’s obvious goal is to expand trade with countries to the south like Indonesia and Vietnam.

Of course, there is this big problem: Every time Taiwan tries to expand its trade with other countries through formal mechanisms like Free Trade Agreements (FTAs), Beijing swoops in with its economic warfare to squash any deals. Indeed, it is precisely in this area—and why Taiwan’s economic fortunes seem so despairing—that Beijing’s bullying has often been its most intense and effective.

Consider, for example, that while Taiwan did manage to sign FTAs with both Singapore and New Zealand, its efforts at wooing countries as far away as Chile and as near as Malaysia have met with firm Chinese “vetoes.” These vetoes come in the form of massive pressure on, and threats to, any countries that might dare to sign FTAs or expand trade with Taiwan.

For example, if Chile moves towards an FTA with Taiwan, China threatens to reduce its purchases of Chilean copper and cut its flow of desperately needed FDI. More broadly, any country with any significant trade with China or reliance on its FDI is exposed to these kinds of Beijing threats.

Moreover, China’s economic warfare is not limited to cutting off Taiwan’s trade with the world. It also seeks to deny Taiwan critically needed weapons systems to defend itself, e.g., no country in Europe dares sell urgently needed conventional diesel electric subs to Taiwan for fear of disrupting the trade relationship.

The last point to note on Taiwan’s economic front is this: Even if its New Southbound Policy is effectively implemented, it may do little to solve the more fundamental problem of stagnant income growth and associated growing political despair at home. The only way to solve this problem is not to just find new offshoring destinations but rather to restore at least some of Taiwan’s manufacturing base to the island.

Such “reshoring” may be difficult, however, given the lack of adequate land on this mostly hilly and crowded island. Nonetheless, one option may be for Taiwan may be to cultivate its own domestic weapons production industry. Here, there is enthusiasm locally to build both aircraft and submarines as part of both Taiwan’s economic and military strategies.

The picture that emerges from any sober review of the Taiwan economy is that of an island with a relatively bleak economic outlook for an extended period. Its economic model of offshoring is broken—while it serves the needs of a narrow swath of business interests, there is little trickle down.

At the same time, any efforts to expand its trade are met with stiff Chinese resistance. Here, as a riff on the Rime of the Ancient Mariner, Taiwan has “markets, markets everywhere but nary a place to trade” because of Chinese bullying.

Most broadly, this grim economic outlook will continue to play a huge part in determining the island’s political destiny. In the meantime, I’d like to close with a tip of the hat to the island’s people who inhabit this midpoint of the First Island Chain with a unique dignity and grace that puts a distinctly Asian twist on Churchill’s courageous “stiff upper lip.”

Peter Navarro is a business professor at the University of California-Irvine and author of the book/film project Crouching Tiger: What China’s Militarism Means for the World. He also serves as a policy advisor to the Trump campaign. (The views expressed in article are his alone and not those of UC-Irvine or the Trump campaign.) His documentary film on Taiwan may be viewed here.