Can THAAD Save South Korea? 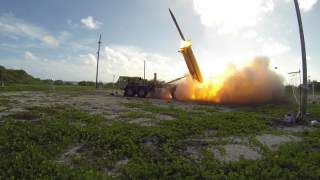 Since South Korean President Park Geun Hye’s decision to deploy the THAAD (Terminal High Altitude Area Defense) missile defense system in South Korea earlier this year, public discourse has flared intensely over the issue. Dozens, maybe hundreds, of editorials, both in favor of and highly critical, have appeared in Korea’s major newspapers. Analysts have invoked Thucydides to explain it. The conservative Saenuri party speaks of THAAD as a paradigm shift.

But the South Korean left has gotten the most carried away, where deployment of a single THAAD battery with just 8-10 anti-missile rockets, has morphed into great powers once again kicking around Korea. There have been marches, protests, and activists shaving their heads. A regular anti-THAAD protest has sprung up next to the U.S. embassy in Seoul. The main opposition elected a new leader, Choo Mi-Ae, who buoyed her appointment with a strong anti-THAAD message. The left’s presidential candidate of 2012, Moon Jae-In, called for halting the deployment. There is talk of using THAAD as a campaign issue in next year’s presidential election.

This is so much sturm und drang over very little – heavily fanned by China, which knows very well how little THAAD changes things and why South Korea wants it. THAAD changes almost nothing geopolitically. It is a defensive system intended recapture the status quo ante against Northern missilization. It does not facilitate American or South Korean offensive action against North Korea or China. Its X-band radar may ostensibly reach into China, as Beijing claims, but other U.S. systems can already determine a Chinese missile launch, so X-band adds nothing. South Korea is only buying one THAAD battery, which has only 8-10 rockets. That battery will not, as a concession to the China, cover Seoul. THAAD also does nothing to reduce North Korea’s conventional, artillery-barrage choke-hold on Seoul.

Next, THAAD has never been battle-tested. No one really knows how effective it will be. But even if all ten THAAD anti-missile rockets were to destroy Northern inbound  missiles, the North almost certainly has, or will soon have, many more, including dummies. Finally, THAAD is only a mild quantitative expansion of what South Korea already has. It is not a qualitative shift in regional air battle scenarios. South Korea’s current missile defense capabilities, the Patriot PAC-2 (soon to be PAC-3), reach up an altitude of 40 kilometers, while THAAD can reach around 150 kms. If Beijing and the South Korean left are correct, adding an extra 110 kms of middle defense range is bringing down east Asian stability. This is preposterous.

In reality, THAAD just thickens South Korea’s “roof” a little. It buys South Korea a few more years at best – a bit more time before North Korea builds so many missile, drones, dummies, and so on that it can overwhelm Southern air defense. THAAD does not obviate the North’s nuclear weapons, much less China’s. It just gives Seoul a little more breathing room to figure out what to do about Pyongyang’s spiraling missile program. This minor addition to Southern defense kicks the can of Northern nuclear weapons down the road while everyone scrambles to figure out what to do before air-strikes become a serious option.

Opponents suggest that THAAD will increase North Korean and Chinese anxiety, spurring reprisals. Perhaps, but those are worth the risk now that North Korea is so close to nuclear-tipped missiles and is likely on track to build dozens in the next decade. And it is North Korea’s missile and nuclear programs which are the real challenges to otherwise stable conventional deterrence on the peninsula. Nuclear missilization gives North Korea a growing asymmetric advantage. Failing to respond would leave South Korea more vulnerable to nuclear blackmail, or a nuclear first strike in case of crisis escalation and conflict. Whatever the risks of THAAD deployment, the risks of inaction are greater. THAAD can help mitigate those risks without offensively threatening South Korea’s neighbors.

But these practicalities are overshadowed by larger currents running through the Korean political system. The left remains committed to the Sunshine Policy (even though North Korea cheated egregiously by continuing its nuclear program through that period), and it still has trouble admitting that North Korea is a greater threat to South Korea than the United States or Japan (yes, really). Moon Jae-In could not politically admit until five years after the Cheonan was sunk that North Korea was the culprit, and in 2012, an openly pro-Pyongyang political party garnered 10% of the vote. China of course has been glad to stoke all this with overwrought claims of THAAD’s capabilities and its bullying interventions into South Korean politics to block deployment.

It is thus understandable perhaps, that few wish to admit how incremental THAAD actually is. The South Korean left remains convinced that North Korea can be talked down, and playing to Korean anxieties of foreign domination – that America is arm-twisting Korea into this, and that China will turn against it – is powerfully resonant. And China benefits from every tortured Korean political decision that gets cast as Korea “choosing” between the United States and China. So long as Korea tilting toward the United States also implies aligning with Japan and against a fellow Korean people, there is always sure to be deep popular resentment. All this stresses the U.S.-Korea alliance and changes the subject away from the Northern nuclear program – fine outcomes for China.

South Korea’s current defenses against a North Korean missile attack grow porous as Pyongyang’s nuclear and missile capabilities improve. THAAD improves things, but only a bit. Soon Pyongyang will have enough nuclear missiles that a Northern nuclear first strike would be powerful enough to existentially threaten the Republic of Korea. This is the real debate of the future: what will Seoul do when North Korea has so many missiles that it will be able to overwhelm any missile defense, and when those missiles are so powerful that they could destroy the Southern constitutional order in one strike? THAAD does not change this terrifying calculus; it just buys desperate Seoul a little more time to chew over it. That alone is reason enough to support but not overrate it.

Robert E. Kelly (@Robert_E_Kelly) is an associate professor in the Department of Political Science at Pusan National University. More of his work may be found at his website: https://asiansecurityblog.wordpress.com/.