Can the Great America-India Team-Up Survive Past Obama? 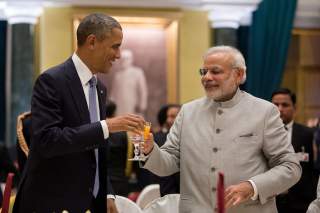 After years of vocal geopolitical neutrality, India has in recent weeks seen firsthand the shortcomings of such neutrality and the promise held by warmer ties between the world’s two largest and loudly pluralist democracies. The traditionally nonaligned South Asian country seems to have been blocked from the Nuclear Suppliers Group by those, like China, who did not want to see India’s status mainstreamed as a responsible nuclear power. In contrast, defense diplomacy and top-level leadership ties between the United States and India have been surging, including a landmark visit by Indian prime minister Narendra Modi earlier this month. This historic warming, and the resulting declaration of a “Major Defense Partnership,” are a moment worth seizing.

Growing interest in shared security is increasingly driving a conversation about cooperation forward. Indeed, Modi’s trip came just under two months after Secretary of Defense Ash Carter’s own visit to the subcontinent, where he pronounced the two nations “destined to be strategic partners in this century.” Now that the pomp and circumstance of Modi’s visit are over, however, the real work must begin to lock in the gains of recent months for the next administration.

While ambitious, the two nations’ declared plan for closer ties is—perhaps for the first time in the history of U.S.-Indian relations—an attainable one. Since independence, India’s defense and foreign policy has been governed by an official stance of nonalignment, but unofficially, trend lines are moving in directions encouraging to American policymakers. Though India has long preserved its geopolitical neutrality and insular economic policy (due in part to difficult neighbors like Pakistan and China) despite U.S. entreaties, this time does appear to be different. Modi and his BJP government are meaningfully changing the tone and scope of Indian debates over global engagement. In recent interviews the prime minister has signaled a growing openness to global defense engagement, aligned with U.S. priorities, stating “today, unlike before, India is not standing in a corner. It is the world’s largest democracy and fastest growing economy. We are acutely conscious of our responsibilities both in the region and internationally.”

The meeting between President Obama and Prime Minister Modi also came at a critical time in the debate over the role of the United States in the world, when the basic premise of American alliances, partnerships and international engagement are being fundamentally questioned on the American presidential debate stage. While relations between the two countries currently benefit from the “special friendship” between the two leaders, this dynamic is not guaranteed under a future U.S. administration. President Obama, therefore, should take this opportunity to create structural reinforcements to ensure a functional—if not explicit—partnership between the two nations. Institutionalizing the already warming military-to-military ties will be necessary, but not sufficient; it will also require targeted economic partnerships that, until now, have eluded the two countries.

Given the nature of India’s historic patterns of global engagement, and even under Modi’s more assertive style, it is clear that in order to capitalize on these deeper defense ties with India, the United States is going to have to meet India on its own terms. This means allowing India to “save face” by claiming nonalignment while simultaneously empowering India to be the ally that the United States needs in the region. This will likely require both investment without immediate market access and armament without promise of assistance. America will have to claim short-term tactical wins with the faith that it will yield long-term strategic gains.

There’s good reason for the United States to patiently pursue such an expanded defense relationship with India. The two countries share a number of values and challenges that can serve to unite them. Internally, both nations have engaged in the great experiment of democracy, balancing the dynamics of diverse, messy, boisterous populations. They have each experienced the attendant glories and challenges of how best to absorb disparate constituencies and protect their populations.

But the true imperative for increased defense cooperation is the shared challenges arising from illiberal competitors unbound from a rules-based order—most notably, China. While arguably a historic influence on India’s stated policy of nonalignment, China’s growing policy of intimidation and coercion throughout Asia presents a global threat, including to both U.S. and Indian interests. The U.S.-India Joint Strategic Vision for the Asia-Pacific and Indian Ocean Region, issued in January 2015, acknowledged their mutual interest in ensuring freedom of navigation and overflight in the South China Sea. In March 2016, U.S. Pacific Commander Adm. Harry Harris called on New Delhi to take a leadership position in the Indo-Asia-Pacific, stating, “we are ready for you. We need you.” While Prime Minister Modi seems publicly reticent to provoke a martial response from his eastern neighbor, as evidenced by his government declining to join American South China Sea patrols, the cadence of joint naval operations and the welcoming of plans across the services for “greater complexity in military engagements and exercises” indicate an acceptance of shared defense goals.

Yet in order to facilitate strategic defense ties with India, it is going to take more than military-to-military engagement from the United States. Equally important to deepening ties with the Indian defense establishment is the way in which America engages with the Indian economy.

Despite impressive growth rates, India has for decades held a reputation for punching below its weight in the global marketplace. This may be in part due to the world’s largest democracy being long seen as overly hostile toward foreign firms and investment from abroad. Indeed, until the last few years there seemed to be little sign of improvement. As recently as 2012, the Indian government was proposing oppressive new tax rates with retroactive liabilities for foreign investors alongside an ever-changing regulatory environment, which prompted half a billion dollars of foreign capital to flee the Indian stock market that year. Its integration into the global marketplace, though improving, remains hobbled.

As India raises its gaze and begins to execute its own “Act East” foreign-policy rebalance toward East Asia, these self-imposed constraints are becoming more apparent. China has embarked on an ambitious infrastructure-building project across the region, building out networks of roads, railways, ports and pipelines. Evoking images of ancient Silk Road trade routes, Beijing’s so-called One Belt, One Road initiative is seeking to both bolster Chinese soft power and raise its stature as an indispensable economic benefactor. OBOR’s reach is broad, spanning both Southeast and Central Asia, including traditionally Indian spheres of influence.

Prime Minister Modi has spearheaded a number of policy changes seeking to build that financial power. Though he has not been the radical reformer many investors had hoped, many of the BJP government’s changes are likely to accrue benefits in the medium term. After making foreign investment easier in several key sectors and fast-tracking road and rail projects, India has seen modest but real progress over the last two years. GDP growth has topped 7.6 percent, besting China’s, and representing a full percentage point gain over the last year of the previous Indian government. Inflation has fallen by half, deficits are in decline and FDI levels are approaching new peaks. Yet must-pass legislation cutting land-acquisition red tape for major projects has stalled, and restrictive local sourcing policies for production remain a deterrent to foreign manufacturers. India is indeed becoming gradually more open to global financial norms, even if it is too gradual for many investors.

To encourage India’s maturing diplomatic terms of engagement, the United States will need to be patient and work with India’s slowly evolving economic terms of engagement. India may yet be the democratic major power ally the United States wishes it to be, but history has shown that common politics and worldviews are not always enough to seal partnerships—strategic and economic cooperation are a necessary adhesive. U.S.-Indian defense ties have been warming, and could serve as a bridge toward the closer commercial ties necessary for a deeper relationship.

Following the lead of talks by the Pentagon, Lockheed Martin and Boeing have both confirmed that they are considering coproduction agreements to build their F-16 and F-18 fighter aircraft in India. Though such coproduction arrangements are typically restrained to close treaty allies, the Defense Department should closely consider approving the requisite technology transfers. This coproduction deal could represent both a historic precedent and a major economic and defense achievement. By partnering with local industrial producers, the project would represent a major greenfield investment bringing to India high-skilled jobs, human and industrial capital, and significant technological advancement—especially at a time when India’s air forces are in need of a fighter-jet recapitalization.