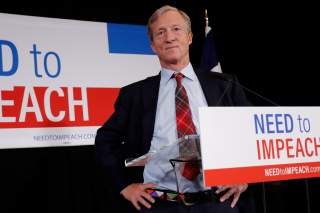 Tom Steyer may not be running for president, but he is trying to exert real pressure on the Democratic party. Steyer has invested $90 million into a “Need to Impeach” movement whose email list numbers around 7.1 million. Several hundred activists traveled to the nation’s capital this week for a two-day workshop-summit in Washington, DC. They did not stay at the Trump Hotel.

Instead, they were treated to an invite-only stay at the five-star Marriott Marquis hotel where they listened to speeches and panels. The problem for Steyer and Co., however, is that House Speaker Nancy Pelosi has been loath to touch the topic of impeachment, preferring to focus on combating Trump on domestic issues. The goal of the activists is to try and up the pressure on House Democrats.

Their tone was seldom less than apocalyptic. Kevin Mack, Chief Strategist for Need to Impeach, declared that the U.S. Congress needed to “impeach Donald Trump and restore our democracy.” How impeaching a democratically elected president would “restore” faith in democratic government went unsaid in his speech. Mack also described a “hostile corporate takeover of our government.” This was an intriguing sentiment since Need to Impeach was founded and by multi-decade hedge fund manager Tom Steyer.

It was the latter who took the stage next, to welcome the hundreds of people whose expenses he had paid for. “I don’t see myself in terms of money,” said Steyer who has an estimated net worth of $1.6 billion. Instead, Steyer wants to be known for his ideas, which he has no difficulty in explaining. His idea is simple: “There is an objective fact that Donald Trump is a cancer at the heart of America.” Describing Trump as a “corrupt and dangerous president,” Steyer concluded, “He clearly instructed people to break the law.” For all the talk of democratic values at the conference, Steyer’s own tone was fairly authoritarian: “There is no other side to this story.” End of conversation.

Steyer was happy to talk about the success his pet-project had had during the midterm elections. According to him, Need to Impeach activism made the difference in three governorships and sixteen house races. As of this week Need to Impeach has 7.1 million supporters, making it the largest active political list in the United States, according to Steyer. “We’re much bigger than the NRA,” he said to raucous applause. “We can’t just be an online petition,” he added. Steyer repeated a common mantra among activists, that “the most important thing in politics is grassroots,” and that “there’s no shortcut.”

The billionaire’s speech was followed by a three-person panel of legal experts who tried to explain why, exactly, Donald Trump ought to be impeached. Ron Fein, Legal Director for Free Speech for People, emphasized that a person doesn’t need to violate any federal statutes or criminal statutes to be impeached. All that’s required is doing things “a good person or a person of honor” would recognize as bad. But at what point does a “bad thing” becomes a policy disagreement?

Another panelist, Ben Clements, focused more on accusations of collusion between the Trump campaign and the Russian government. Clements is Chair of the Legal Committee of Free Speech for People and former Chief Legal Counsel to Massachusetts Governor Deval Patrick. Clements said there was “overwhelming evidence” that the campaign was actively involved in Russian interference, though he forbore to say what it was. “He is an illegitimate president and that’s the number one reason he needs to be removed,” said Clements, before musing that the Constitution should have a kind of “re-do” clause for situations such as this. When he mentioned the possibility of removing Vice President Mike Pence too, the crowd erupted with applause. “He is loyal to himself and to his foreign benefactors led by Vladimir Putin, not the American people,” said Clements.

In an interview with TNI, president of Free Speech for People and panel moderator John Bonifaz spoke about the importance of filing impeachment before the 2020 election. “The process of calling for impeachment is about abuse of power, abuse of the public trust, and the remedy that the framers put into the constitution with the impeachment clause is to remove somebody who is threatening our republic, threatening our democracy…but the issue of an election is separate from whether or not there are abuses of power that have been committed and for which the republic needs to be protected by removing that person to prevent those future abuses of power,” said Bonifaz. If the Democratic-majority House did vote for impeachment and the question of removal was sent to the Republican-majority Senate, Bonifaz said, “Those senators are going to have a hard time defending the lawlessness of this president and keeping him in office.” Not issuing charges against President Trump would “set a very dangerous precedent for future administrations that they too can engage in this kind of lawlessness and undermine our democracy and our constitution.”

Many attendees wore Need to Impeach shirts and swag. Multiple attendees (Steyer included) mentioned the rave reception they received from TSA agents, including high-fives, verbal praise, and even picture-taking to show solidarity in opposition to President Trump. Attendees came from all over the country, with a predominant minority coming from South Carolina.

The day concluded with a speech by former Congresswoman Elizabeth Holtzman, a 1970s feminist icon who achieved notoriety for serving on the House Judiciary Committee during the Watergate hearings. She described the summit as “democracy in action,” just “what the founders intended.” Her theory rested on the stated presumption that the framers included the impeachment clause in the U.S. Constitution because they wanted us to use it. She said, “impeachment is a process to preserve democracy from a president run amok.” Richard Nixon resigned from office before he was officially impeached by the House of Representatives, but Holtzman still described it as the only successful impeachment, since the result was the removal of the president. She said the impeachment of Bill Clinton (along with Andrew Johnson) was a “totally partisan” affair.

Her speech consisted of a retelling of the Watergate scandal and hearings. She said it was “horrifyingly similar” to the situation now. While clarifying that it wasn’t necessary to impeach President Trump immediately, what was imperative was opening public investigations. It was publicly broadcasted congressional investigations that educated the American public in real time both on the impeachment process and Richard Nixon’s actions.

“I believe that in the end, if the process is fair, and it's not partisan, you try to bring the Republicans along, and the evidence is there, I think that people will understand that preserving democracy is more important than any part or any president. That’s what the American people decided in the Nixon impeachment process. They had to change their minds,” said Holtzman in an interview with TNI. “I think the important thing about impeachment that the American people should understand is that the Republican Party will still be in control of the presidency because Michael Pence will become president,” said Holtzman. She concluded, however, with a political warning to the GOP: “What happened after the Nixon impeachment was that the American people threw out a huge number of Republicans from Congress.”