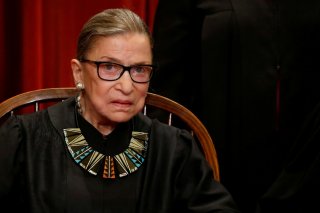 With the death of Supreme Court Justice Ruth Bader Ginsburg, the presidential race has taken another sharp shift. A climactic battle looms over the future of the Supreme Court that will have unpredictable political implications but could help to revive Donald Trump’s flagging fortunes. At a minimum, it provides him with the further opportunity to deflect attention from the coronavirus pandemic that he has mismanaged. With passions running higher and higher, Ginsburg’s demise will intensify the culture war.

Ginsburg was the leading liberal voice on the Supreme Court, a champion of women’s rights and a host of other causes that transformed her into an icon known as Notorious RBG. Her politics did not affect her personal relationships. She was a close friend of former Justice Antonin Scalia. But she was also a sharp critic of President Trump and a reliable vote against his policies. She referred to the Trump era as “an aberration” this past October.

Trump can play it three ways. He can move immediately to nominate a replacement. He can wait for a lame-duck session. Or he can keep the seat open for the beginning of his second term.

The blunt fact is that the opportunity to seat a third justice represents a monumental political opportunity for President Trump. He would go down in history as one of the most significant presidents, whether or not he wins a second term. The last Republican president to install three justices in his first term was Richard M. Nixon. A likely Trump nominee would be Notre Dame’s Amy Coney Barrett, whom Trump has previously considered for a seat on the court.

Trump will have the opportunity to put the final seal of defeat on the liberal era that began with the Roosevelt administration and ran through the Obama administration. A sixth Republican justice would essentially ensure that any sweeping liberal programs a President Joe Biden or another Democratic president might endorse would be condemned to the ash heap of history before it even had an opportunity to become established. Chief Justice John Roberts has at times been a thorn in Trump’s side. He would be relegated to the sidelines with an additional conservative on the court.

Trump’s chief of staff, Mark Meadows, indicated in July that the president would seize upon the opportunity to replace Ginsburg. He said, “I can’t imagine if he had a vacancy on the Supreme Court that he would not very quickly make the appointment and look for the Senate to take quick action.” A battle over a seat on the Supreme Court will galvanize conservative support for Trump. It could help to ensure that Sen. Lindsey Graham wins another term as well.

But Trump will have to calculate carefully. Senate Majority Leader Mitch McConnell and he will likely be tempted to try and ram through an appointment but may not have the votes. Senator Lisa Murkowski has announced that she will not support a vote before inauguration day. Cory Gardner and Susan Collins would surely quail at the thought of voting to support a conservative Supreme Court Justice. With everything from the Affordable Care Act to abortion on the chopping block, Collins and Gardner simply cannot afford to antagonize swing voters. Then there is the question of Sen. Mitt Romney. Would he vote to confirm a Trump nominee—or would he bolt? He seems likely to join Murkowski.

The implications for the presidential race, however, are unpredictable. Democrats, who remember the Merrick Garland episode, when President Barack Obama nominated him to the Supreme Court, will also be energized by the prospect of a fight over the court’s future. They will be further emboldened to call for a repeal of the filibuster if Biden wins the election.

But there is another possible wrinkle that should be considered. What if the Supreme Court is called upon to decide the outcome of the 2020 election as it was in 2000. Right now, it might be deadlocked at 4-4. But a nominee that Trump pushed through successfully could vote for him to serve a second term. The stakes have never been higher. So is the volatility of America in what looms as the most significant election in decades. It appears to be plunging over the culture war cataracts into a prolonged conflict that could swamp its democracy.