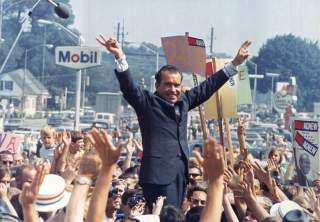 William Kristol, the editor of the Weekly Standard, is profiled in a lengthy piece in the Washington Post. It explains that as Kristol headed toward the Quicken Loans Arena on Monday a commuter told him, “You don’t turn me on.” That’s putting it mildly. Regime change is taking place in the GOP. As Donald Trump prepares to be anointed on Thursday, the anti-Trump rebellion didn’t crash; it never took off in the first place.

At the same time, the feud between Corey Lewandowski and Paul Manafort shows no sign of abating. It’s becoming increasingly clear that Lewandowski never misses a chance to target Manafort. After Melania Trump’s speech last night was discovered to have contained some similarities to a convention address delivered by Michelle Obama in 2008, Lewandowski said, “I think if it was Paul Manafort, he’d do the right thing and resign. If he was the last person who saw this, and saw this happen, and has brought this on the candidate’s wife, I think he’d resign because that’s the type of person he would be.” Lewandowski’s solicitude for Manafort is touching, but unlikely to be requited.

The real problem isn’t so much the speech. It’s that Melania’s remarks expose cracks in the Trump campaign. As Roger Stone told Politico, “Campaigns cannot be a democracy, they must be a dictatorship.” When it comes to his campaign, at least, Trump’s difficulty may not be that he is a dictator, but that he is not dictatorial enough.

Richard Nixon, whom Trump says he wants to emulate, did not have this problem. When he was reelected in 1972, he asked for the resignations of his entire cabinet. Nixon was the consummate political animal, attentive to every last detail of the campaign. If Trump wants to emulate Nixon, he would do well to take a look at his book Six Crises. The most valuable chapter, I think, is Nixon’s analysis of his failed 1960 campaign. In it, Nixon offers a number of insights about politics and the presidency.

Nixon, in a statement that might resonate with Trump, emphasized that it was important for the campaign not to become subsumed by the Republican party apparatus. He argued that it was important to establish coordinated, volunteer organizations—something that Trump, given the enthusiasm among his base, should face few impediments to creating. Nixon noted: “Our Nixon-Lodge Volunteer Clubs in the various states did prove to be irritants to some of the regular party officials, but in retrospect I’m convinced that made a great contribution to our excellent showing among Democratic and independent voters.”

Nixon emphasizes that it’s a mistake to confuse friendship and politics. According to him, “one of the hardest lessons in political life to learn is that the rarest of all commodities is a political friendship that lasts through times of failure as well as success.” Nixon espoused a certain immunity to the emotional slings and arrows of the campaign. He recalled, “The same men who had publicly called on me to resign from the ticket during the early days of the fund attack in the 1952 campaign, heaped praise upon me after my television speech—and after the favorable reactions started pouring in.” Of course, as Republicans soon discovered, Dwight Eisenhower’s opponent, Adlai Stevenson, had his own slush fund.

If Nixon had a cold-eyed view of political alliances, he also adopted a rhetorically gelid position on race relations in America. In his 1968 convention speech, he declared, “As we look at America, we see cities enveloped in smoke and flame. We hear sirens in the night. We see Americans dying on distant battlefields abroad. We see Americans hating each other; fighting each other; killing each other at home. And as we see and hear these things, millions of Americans cry out in anguish. Did we come all this way for this? Did American boys die in Normandy, and Korea, and in Valley Forge for this?”

Of course, Trump does not confront the very same conditions that Nixon confronted in 1968. The antiwar movement had riven colleges and universities. Black nationalism was reaching a peak. And the Vietnam War was deeply unpopular and widely seen as unwinnable. Nixon said he had a “secret plan” to end it. He also promised that he restore law and order at home. Today America offers a palimpsest of 1968.

Still, the worse things get, the better Trump’s chances become. His path to victory has not changed one iota. A domesticated Trump would be a recipe for failure. The unadulterated version, however, might succeed.