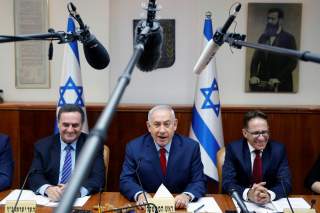 President Donald Trump hosted Palestinian Authority president Mahmoud Abbas at the White House on May 3 for a get-to-know-you session. Trump is a newcomer to the world of Israeli-Palestinian peacemaking, but confident to a fault that his unique talent as a dealmaker and unconventional approach towards the world writ-large would lead to the agreement of a lifetime. Meanwhile, the eighty-two-year-old leader of the Palestinian national movement knew from past experience that making peace in the Holy Land wouldn’t be a walk in the park. In fact, it would take a miracle just to get Israelis and Palestinians around the same conference table.

Nevertheless, Trump put up a good front during the meeting. His comments before that confab and ever since have been extremely optimistic—that a territorial and ethnic dispute among Arabs and Jews spanning five decades could be bridged with just the right amount of honey and vinegar. “We want to create peace between Israel and the Palestinians,” Trump told Abbas during the press conference. “We will get it done. We will be working so hard to get it done,” he said. Trump was even more blunt a week earlier when he told Reuters in an Oval Office interview that “[t]here is no reason there's not peace between Israel and the Palestinians—none whatsoever.” Just hand the file over the Jared Kushner, and he’ll take care of it.

President Trump is now coming to the inescapable conclusion that all of his earlier bombast was shortsighted and premature. It turns out that Israelis and Palestinians haven’t been able to come to terms with one another for over fifty years because the disagreements on territory, refugees, security and recognition aren’t even close to being in the same ballpark.

Jared Kushner tried to get a lay of the land last week during a day trip to Israel and the West Bank, which is where he met with Israeli prime minister Benjamin Netanyahu and Abbas. The purpose of the trip, according to the White House, was to learn from Netanyahu and Abbas what they thought a final deal should look like and what they could to do start a formal negotiating process. Additionally, the trip delivered a message to Tel Aviv and Ramallah that the president of the United States considered Mideast peace a top foreign-policy priority. The meeting evidently didn’t go well. A Palestinian source told Haaretz a day after Kushner flew back to Washington, DC that Abbas was angry that the Americans were carrying Netanyahu’s water. The Palestinian delegation was expecting a substantive strategy session with Kushner on Ramallah’s principles. What they received instead was a demand from Kushner that Abbas stop the money flow to convinced Palestinian terrorists and their families. When Abbas asked Kushner what the administration’s view was on Israeli settlement building, the Palestinian source said that he “received no answer.”

Indeed, the Kushner-Abbas meeting ended on such a bad note that the White House is reportedly second-guessing whether restarting the peace process is even an option. In a few hours, Kushner found out first-hand why divisions in the Israeli-Palestinian relations have been the status-quo for as long as anyone can remember. It’s just the latest indication that the “big deal” that Trump is looking to sign is as elusive as big-foot; we’d like to think it exist, but we’ve never been able to get within arms length of it.

So, if the “big deal” is nowhere to be found, what can the United States do? The easy answer is to say “nothing,” because as long as Netanyahu and Abbas persist in being bullheaded, then there is nothing any mediator can do. But Americans are not known for being defeatists, and Trump isn’t one of those people who sits on his hands—especially when the alternative is winning the Nobel Peace Prize.

The only alternative may be to play small-ball. After all, trying to jam comprehensive negotiations down the throats of Israelis and Palestinians when they are either not able or not interested in participating is a losing proposition. As former Secretary of State John Kerry found out multiple times, trying and failing to strike the big deal adds one more layer of cynicism in the minds of Israeli and Palestinian officials who already doubt whether peace is possible. With each round of failure, the peace camps on both sides of the dividing line lose even more credibility with their people.

Playing small-ball isn’t as exciting as hitting grand-slams out of the park, but it nevertheless has the potential to gradually run up the score. As veteran peace negotiators Dennis Ross and David Makovsky wrote last month in the New York Daily News, hitting a couple of blooping singles is better than swinging for the fences and consistently striking out. And the best way to get out of a slump is by getting back to the basics.

So here’s a note to President Trump: don’t waste your time getting Netanyahu and Abbas to shake-hands or smile with one another for the photographers. It’s just not going to work.

Instead, work on building small amounts by asking for concessions that the Israeli government and the Palestinian Authority can deliver with minimal domestic political risk. Focus, for instance, on delivering some of the small but meaningful things that would positively impact the daily lives of the Israeli and Palestinian people. That would include maintaining the Allenby Bridge crossing on an around-the-clock schedule, putting a stop to the expansion of settlements outside of major settlement blocs that will be annexed to Israel anyway, making it a little easier for Palestinian laborers to cross into Israel every morning for work, and promoting the kind of economic development in the West Bank that former Palestinian prime minister Salam Fayyad prioritized during his tenure. Also, efforts must be made to demonstrate to the Israelis that the Palestinian Authority will speak out after a terrorist attack, work diligently with Israelis to arrest extremists on their radar, and no longer tout terrorists as martyrs deserving of a substantial Palestinian Authority salary.

This isn’t what Trump had in mind when he talked about making the “ultimate deal.” He’s a mover and a shaker who would like nothing more than to prove to the Mideast peace industry that they are as wrong as the political establishment was last year. Trump has an opportunity to do just that, but a diplomatic miracle won’t happen if he orders his negotiators diving into the choppy waters of the Mideast without an oxygen tank.