Can Trump Strike a Deal with North Korea? 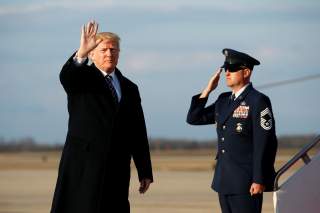 It’s not often that a president of the United States can simultaneously advance salient economic and security goals. Without wishing to jinx that desired outcome, it is hard not to appreciate how President Donald Trump is positioning his administration to execute a rare act of successful statecraft. In the space of several weeks, he has artfully blended both trade and national security and seized the initiative with both halves of the Korean Peninsula.

After a startling diplomatic breakthrough with South Korea on light trucks, cars and auto parts, President Trump is driving forward on both trade and, perhaps, on nuclear nonproliferation and peace in Northeast Asia. He is doing the former via an agreement in principle to lower barriers to fair and reciprocal trade, and he has an opportunity to do the latter using a possible rendezvous with Kim Jong-un in May.

The official announcement on Wednesday morning that the White House and the Blue House achieved a political understanding on trade follows on the heels of unrelenting partisan attacks on President Trump and U.S. Trade Representative Robert Lighthizer for manhandling a critical alliance by imposing steel and aluminum tariffs more apt to hurt allies and friends than strategic competitors. The tariffs also appeared to genuinely put at risk the 2012 Korea-U.S. Free Trade Agreement (KORUS FTA), which has been in a protracted state of revision if not renegotiation.

Long forgotten is how many years it took the Obama administration to muster the political will to push through KORUS. And the final agreement, far from creating clear-cut gains for the U.S. economy, added billions of dollars to America’s trade deficit with South Korea and cost thousands of American jobs, especially in the auto industry.

By extending protection to U.S. light trucks out to 2041, and streamlining the selling of U.S. cars and auto parts in Korea, the Trump-Lighthizer understanding with the Moon administration motors some distance in the direction of fixing critical flaws in KORUS. The agreement to add greater access for U.S. pharmaceuticals in South Korea only further improves on free and fair trade, the principles of which the Trump administration intends to apply universally. The U.S.-Korean deal sets an outstanding precedent for improving other trade agreements.

Lost on those focused only on trade, however, are the strategic implications of this leap forward. This timely accord trusses up alliance solidarity just before it approaches a potential North Korean diplomatic hairpin turn that could spell disaster or open an unexpected path towards peace.

President Moon has staked his legacy on achieving some rapprochement with North Korea, and he and Kim are set to meet in what will be only the third such encounter between leaders of South and North Korea. That encounter is set for the end of April, at Panmunjom, on the inter-Korean border. In the truce village in the Demilitarized Zone, both leaders plan to discuss both a possible peace architecture and the denuclearization of the peninsula.

Meanwhile, President Trump is prepared to meet with Kim at an unprecedented tete-a-tete between a sitting U.S. Commander in Chief and the leader of North Korea. That summit could occur in May. Furthermore, Trump and Kim have suggested all differences can, in theory, be resolved through top-level diplomacy—and anything is possible at even an ice-breaking get together.

Success is hardly guaranteed. It bears remembering that thus far North Korea has made no serious moves that would suggest it’s serious about eliminating a presumably still growing arsenal of nuclear-armed missiles. But President Moon and Trump have created an opportunity for this to appear a serious possibility.

The salient point is that rather than approaching an adversary at a time when the alliance is in doubt, Moon and Trump will each be able to face Kim from a position of maximum strength. Two democratically elected leaders responsible for major market economies and are committed to a free and open, rules-based system, have already remained remarkably steadfast with respect to a maximum-pressure-and-engagement strategy for managing North Korea.

Securing a new approach to bilateral trade, the United States and South Korea can focus on the road ahead, and keep all of their attention on the high politics of peace and security.