Can Trump Turn the Tables on His Impeachment Accusers? 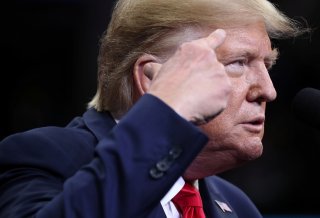 On Wednesday, a combative President Donald Trump posted a picture of his head superimposed on the photo of a musclebound Sylvester Stallone, the star of the Rocky series of movies, on his twitter feed. It was consistent with his message of punching back against his adversaries, whenever and wherever he can.  In contrast to the numerous advisers who are warning that he should instead focus on governing, Trump has embraced the impeachment hearings to try and wield them as a weapon against his political foes.

There is plenty for him to attack. The House Intelligence Committee has finished its hearings and will send a report to the House Judiciary Committee. The latter announced that it will start hearings with constitutional law experts next Wednesday and invited Trump himself to attend or to send counsel. The White House has until Sunday to decide whether or not it wants to participate.

Since the inquiry deals with a matter semi-related to intelligence, Chairman Adam Schiff (D-CA) was quick to take the lead on conducting impeachment, still unfulfilled after the Mueller Report he had long hyped turned into a dud. Judiciary Chairman Jerold Nadler (D-NY) will take over proceedings and initiate his committee’s traditional role of drawing up and voting on articles of impeachment. From here, the articles will be sent to the House floor, where a final vote will take place, probably before the Christmas recess.

As the baton passes from Schiff to Nadler, what state is the impeachment of Trump in?

For the Democrats, it’s a mixed bag. They have scored a lot of attention with the hearings and the New York Times is reporting that Trump was aware of the whistleblower memo when he decided to resume military aid to Ukraine. But after hearing the testimonies of William B. Taylor, Alexander Vindman, and Fiona Hill, it appears few, if any, Americans changed their mind about the conclusions they had already reached. Support and opposition to impeachment is the same as it was before two weeks of public testimony about Ukraine and Trump. According to CNN, nine in every ten Americans polled say they feel “very strongly” about their opinion.

Some Democrats are beginning to think they’ve drawn a losing hand. Rep. Brenda Lawrence (D-MI), who voted in favor of the inquiry, now says that the Democrats should only vote for a milder condemnation like a censure. “We are so close to an election,” Lawrence said Sunday. “I will tell you, sitting here knowing how divided this country is, I don't see the value of taking him out of office.” Indeed, swing states like Lawrence’s Michigan will ultimately reveal if impeachment was electorally beneficial for Democrats.

When it comes to opinion polls, Trump is still fighting to keep his head above water, but no more than usual. Close to half the country wants him impeached and removed, while in 1998 only 29 percent of voters supported the Republican impeachment of Bill Clinton. Trump holds an approval rating at 41 percent—the same static number it’s been since his 2017 inauguration.

Trump has been making several moves to try and insulate himself from the inquiry. For one thing, he is seeking to distance himself from his personal lawyer Rudy Giuliani, telling Bill O’Reilly in an interview that he was not aware of his activities in Ukraine: “No, I didn’t direct him. But he’s a warrior. Rudy’s a warrior. Rudy went. He possibly saw something.” He added, “Rudy has other clients, other than me.” The Justice Department has also asked for a stay on the ruling that former White House counsel Don McGahn must appear before Congress.

Most importantly, the Republican base shows no signs of abandoning Trump. “They’re pushing that impeachment witch hunt. A lot of bad things are happening to them. You see what’s happening in the polls? Everybody said, ‘That’s really bullshit!’” Trump said at a campaign rally last night in Sunrise, Florida. The crowd cheered and responded with chants of “Bullshit! Bullshit!”

Since the beginning of October, polls show no less than 80 percent of Democrats have supported impeachment, no more than 48 percent of independents have, and no more than 10 percent of Republicans have. Absent a major revelation expect these numbers to stay right where they are. The presidential election, not impeachment, is what’s likely to determine Trump’s fate in 2020.