Can Trump Win the Shutdown Battle? 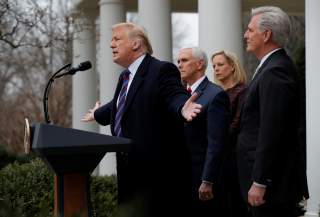 The longest federal government shutdown on record lasted twenty-one days. There’s talk of this one lasting “months or even years.” That almost certainly won’t happen—the current partial shutdown would go from annoying headline to political crisis long before then—but it’s a sign we are in uncharted territory.

President Donald Trump sounded an optimistic note at the White House following a meeting with congressional leaders, but Democrats don’t see it that way. Democrats still have the votes to mount a filibuster in the Senate and now control the House. This impasse began while Republicans ran both sides of Pennsylvania Avenue.

The conventional wisdom is that Republicans always lose on government shutdowns no matter the circumstances. The media is hostile and neither federal workers nor the major constituencies for non-defense spending are in the GOP’s corner. But Trump won on an immigration-related government shutdown last year, as key Senate Democrats caved rather than continue holding up funding federal operations over the Deferred Action for Childhood Arrivals (DACA) program President Barack Obama unilaterally created and Trump rescinded.

An important difference is that on the DACA fight, it was Democrats who were keeping parts of the federal government from being funded over an unrelated issue. That has traditionally been a losing position from which to wage these public relations battles. There were also red-state Democrats up for reelection that year who couldn’t afford to have a shutdown connected to illegal immigrants on their resume, even if it was a sympathetic subset of illegal immigrants.

Here the border wall is a quintessential Trump agenda item and he has been caught on camera saying he would shut down the government for as long as it takes to get it funded. That makes it difficult to blame the Democrats for what happens next, though the president and congressional
Republicans will certainly try. And some of the decisive Democratic votes here won’t be from Trump states, but from districts who sent Democrats to Congress precisely to counter Trump on these kinds of issues.

Trump’s shutdown messaging is also confusing. He insists he can start building the wall on his own without Congress using a variety of means at his disposal, ranging from the seizure of private property through “military” eminent domain or by taking money from other government functions. (One report quotes Democrats as saying he threatened to “raid” the State Department budget.)

But if he can do those things unilaterally, why does he need the Democrats to get on board? It seems to invalidate the argument for the shutdown, even leaving aside the whole question of whether Mexico would pay for it.

Trump allies have been waiting for the president to give a major televised speech laying out his vision for border security and why building the wall is so important, amping up pressure on the Democrats in the process. So far, nothing like that seems to be in the works. Trump’s shifting
parameters for a deal, always a major problem in legislative negotiations with this White House, have confused Democrats and Republicans alike.

After spending the first two years of his presidency investing political capital in other people’s priorities, give or take a trade war or several, whether it was the Republican congressional leadership or his own national security staff, the president now seems to want some of the
distinctly Trumpian promises to his base fulfilled. That includes winding down wars he opposed or criticized during the campaign and building the wall.

Some Democrats, including newly minted presidential candidate Elizabeth Warren, may agree with Trump on the former. But they have little incentive to give in on the latter. Blue Dogs are an endangered species and for the first time in history the Democrats have a House majority with
no meaningful Southern conservative wing.

Still, there is a small glimmer of hope in the “wall” versus “fence” semantics on Capitol Hill. Democrats don’t want to look totally unserious on border security. They are willing to spend money on new technologies at the border, including “enhanced fencing.” What’s the difference?

"Well, we will have to see what the particulars are as it relates to justification for enhanced additional fencing along a 2,000-mile border," Rep. Hakeem Jeffries (D-NY) told CNN before becoming the Democratic caucus chair. "But in terms of a political promise that Donald Trump made during the campaign and is trying to now extract from the American taxpayers, that's completely unreasonable."

That doesn’t sound like much. Of course, even if the wall/fence circle could be squared there would still have to be an agreement over money. Trump is looking for $5 billion while Democrats want to spend something closer to $1.3 billion on border security items including,
but not limited to, fences.

For now, the political consequences of this stalemate are minor, especially with the next election so far away. But if this really does stretch into “months,” or maybe even a “month,” and we see federal work stoppages, pressure will mount for a solution.