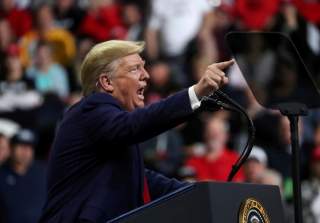 No one who has read Colin Dueck's Age of Iron: On Conservative Nationalism would have been surprised in the least by the kabuki dance Republican legislators have engaged in ever since President Donald Trump announced American disengagement from northern Syria. The initial reaction, in keeping with the broad tenets of the internationalist approach defined by forward U.S. engagement that is the preferred prism in Washington for interpreting policy, was to criticize the decision. Then, when reactions from the Republican voter base suggested that the “betrayal of the Kurds” line which characterized the responses during the initial twenty-four hours following the decision was not broadly resonating, the discussions shifted to assessments of what course of action would prove most advantageous to the national interest. The October 16, 2019, resolution in the House of Representatives condemning the action passed with bipartisan support, but sixty Republican House members chose to cast votes against it—and not just members from the smaller caucus of non-interventionist/strategic restraint conservatives. The dominant narrative—of a surrender of U.S. leadership—prevailed, but the counter-narrative expressed by the President—why are we there—showed that it could gain traction.

This is because the Syria question triggered fault lines between Republican internationalists and Republican nationalists. For much of the post-Cold War era, these differences were largely subsumed under an assessment that linked robust American involvement abroad with national strength and wellbeing at home. Dueck notes that “Donald Trump rearranged and broke down this expected pattern by locating and emphasizing new sources of division within the Republican Party.” One of those areas has been a challenge to the mantra that the peace and security of other parts of the world is both necessary for U.S. peace and security—and that the United States must be prepared to do the heavy lifting to achieve those ends. Republican internationalists may start from the premise that forward engagement abroad is the starting point for peace and security at home, but Republican nationalists prefer to examine threats and challenges on a case-by-case basis.

A key part of the Trumpian vision is the belief that “existing international military and commercial arrangements have been disproportionately costly for the United States and must be reoriented or renegotiated in the opposite direction.” This openness to change—characterized by the specific leadership style of the administration towards sudden, disruptive and daresay even impulsive moves—should not take away from the fact that there is a constituency within the Republican party for renegotiating or even abandoning existing arrangements (in terms of trade, alliances, etc.) if they cannot be shown to advance and safeguard U.S. interests, usually defined in material and economic terms (rather than ideological or humanitarian).

There is often a tendency, particularly in Washington, to view the Trump administration as an unfortunate blip in U.S. foreign affairs—a moment that will soon pass. What has been fascinating is to watch the messaging at international gatherings like the Munich Security Forum, where the line has shifted from “the President will grow into the job” and reaffirm past policies (2017), to “the President is surrounded by the right people who will keep the train on track” (2018) to “help is on the way” (2019). At some point, U.S. foreign and defense policy will snap back into its old familiar shape. Dueck warns against this complacency.

I concur with his assessment. Across both parties, there is a sense among Americans, as a recent report issued by the Carnegie Council for Ethics in International Affairs concludes, that U.S. involvement in the international system must be amended—with a renewed focus on how American policy abroad connects to the doorstep issues of average Americans. There is also a renewed suspicion of losing American sovereignty or decision-making to bodies that are beyond the reach and control of the voters. “Trumpian” themes about revisiting the merits of free trade or reconsidering U.S. commitments abroad are sounded both by candidates seeking the 2020 Democratic nomination as well as by possible future Republican presidential contenders like Nikki Haley.

Americans are never going to be isolationists—because U.S. security and prosperity do depend on U.S. interaction with the rest of the world. The question is the degree and depth of that interaction. Against the backdrop of the Trump administration, that renegotiation is taking place.

Nikolas K. Gvosdev is the Captain Jerome E. Levy chair of economic geography and national security at the U.S. Naval War College. He is also a Black Sea Fellow at the Foreign Policy Research Institute. The views expressed here are his own.