Can Turkey be Part of the Solution in Iraq? 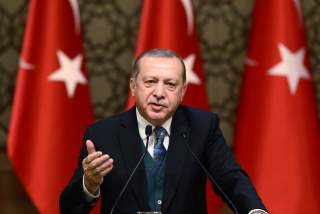 Tensions between the central government in Baghdad and the Kurdistan Regional Government (KRG) soared after the latter held an independence referendum at the end of September. Iraqi prime minister Haider al-Abadi responded by dislodging Kurdish forces from the disputed regions including the oil city of Kirkuk and imposed economic measures that could lead to a collapse of the KRG economy. Swift negotiations between the parties are needed to prevent further escalation. Many agree that that might not be possible without external mediation.

Turkey sees itself as the master of mediation. Under the ruling Justice and Development Party, Turkey used mediation in regional and global conflicts to exert its influence in international affairs. It even led the “friends of mediation” initiative at the United Nations along with Finland. Turkey tried tirelessly to mediate between Palestinian factions, Iraqi factions, Israel and Syria, Iraq and Syria, Bosnia-Herzegovina and Serbia, even in the civil war in Somalia. Ankara’s mediation efforts, however, rarely yielded positive results, which was often due to Turkey’s lack of leverage over the parties or its image as a country with a neo-Ottoman agenda.

But Turkey insists on mediating. It recently signaled that it could step in to act as a go-between in Baghdad’s dispute with Erbil. In a recent statement, Turkish foreign minister Mevlut Cavusoglu said that the KRG “has formally asked Turkey to contribute to normalization between Erbil and Baghdad.” Cavusoglu will discuss Turkey’s role in the negotiations and bilateral issues during his January 21 visit to Baghdad.

Renewed negotiations between Erbil and Baghdad are important for Turkey. Up until the KRG’s referendum decision, Erbil was one of the very few Turkish allies left in the region. It played a critical role in Turkey’s domestic and regional calculations. Through its close partnership with Erbil, Ankara sought to curb Iranian influence in Iraq. Turkey hedged its bet on Erbil in its efforts to counter the Kurdistan Workers’ Party (PKK) both at home and in the region. Masoud Barzani, former president of the KRG, tolerated Turkey’s cross-border operations against PKK hideouts inside KRG territory, and even allowed Ankara to build military bases in areas under his control where Turkey has been training peshmerga forces.

Turkey also benefited from trade with the autonomous region. The KRG has become Turkey’s third biggest export market and a supplier of oil and gas. Ankara quietly dropped its decades-old opposition to Kurdish control over the oil-rich town of Kirkuk to benefit from the oil pumped from Kirkuk via a pipeline through southeast Turkey to the Mediterranean. Turkey not only collected transit fees, but became reliant on imports to meet its own fast-growing energy needs.

The post-referendum dynamics, however, threaten all of those things. Particularly concerning for Ankara is the prospect of a stronger PKK in the absence of Barzani acting as a counterbalance. The economic measures imposed by Baghdad threaten a collapse of the Kurdish economy, thus threaten Turkish interests as well. Turkey supplies Iraqi consumer goods overland through the KRG using Kurdistan-based merchants. The KRG owes Turkey billions of dollars, but Erbil is struggling to even to pay its public servants. Ankara is also eyeing investment opportunities in Iraq as well as access to Iraq’s southern oil fields, which produce more oil than the Kirkuk fields.

Ankara wants parties to reach a swift consensus so that it can resume security partnership and oil flow. Turkey hopes that midwifing a workable arrangement between Erbil and Baghdad will provide Turkey a fresh start with both. But Abadi might not be as enthusiastic, not just about Turkish mediation but also about a swift resolution of the conflict with Erbil.

Parliamentary elections will be held in May. Once called a “traffic warden” by members of his own party, Abadi now enjoys wide popularity for reclaiming disputed territories from the Kurdish forces. Many in Iraq think that being tough on the Kurds might hand him another term in May. That means he might not be in the mood to give concessions necessary to negotiate a settlement to the Kurds before the elections.

Even if he decides to do so, Abadi will not allow Turkey to play a role at a time when he is trying to burnish his nationalistic credentials. There is a deep sense of distrust toward Turkey in Iraq. Suggestions in pro-government circles that Turkey could stake a claim to Kirkuk and Mosul, former Ottoman lands, has been deeply disturbing not only to the Iraqi government but also to Iraq’s nationalists. Turkey’s close energy and military partnership with the KRG, its ethnic ties with the Turkmen in Kirkuk, and its relations with the major political actors in Mosul have raised suspicions about the intent of Turkey’s interventions. Many Iraqis view Turkey’s involvement with domestic Iraqi actors as a breach of Iraqi sovereignty.

Ankara’s interventions are not welcome even among Turkmens. Despite their cultural and linguistic links to Turkey, many Turkmen feel they are part of Iraq and view Turkey’s intervention on their behalf as counterproductive.Turkey’s troop presence in northern Iraq therefore sparked a strong reaction from Baghdad, which demanded Turkey withdraw troops immediately. It remains a flashpoint in bilateral ties.

Turkey sees high stakes in Baghdad-Erbil reconciliation, but after being part of the problem for so long, it cannot be part of the solution now.

Gonul Tol is director of Turkish Studies at the Middle East Institute.