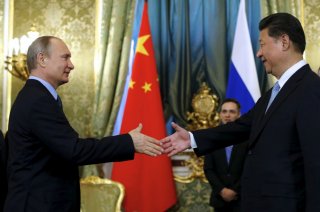 Preventing adversaries from dominating the Eurasian landmass is a strategic imperative for the United States. Although Washington has recently awoken to the dangers that growing Chinese power poses in this regard, another threat has received comparatively little attention: the emergence of an increasingly anti-U.S. partnership between China and Russia. The combination of China’s economic and technological heft with Russia’s abundant resources and potent military could produce capabilities far greater than the sum of either country’s individual strengths.

Is Moscow intent on strategic alignment with Beijing regardless of U.S. policies? What is driving Chinese policy toward Russia? And what, if anything, can the United States do to discourage Sino-Russian alignment against American interests?

The Center for the National Interest and an all-star panel of experts discussed these important questions.

Emma Ashford is a resident senior fellow with the New American Engagement Initiative in the Scowcroft Center for Strategy and Security at the Atlantic Council.

George Beebe is Vice President and Director of Studies at the Center for the National Interest.

Paul Heer is a Distinguished Fellow at the Center for the National Interest and a non-resident senior fellow at the Chicago Council on Global Affairs.

Fyodor Lukyanov is one of Russia’s foremost experts in foreign affairs, serving as Chairman of the Presidium of the Council on Foreign and Defense Policy, editor in chief of Russia in Global Affairs, and research director of the Valdai Discussion Club.

Dimitri K. Simes (President & CEO of the Center for the National Interest) moderated the discussion.