Can the United States Prevent Saudi Arabia from Getting Nuclear Weapons? 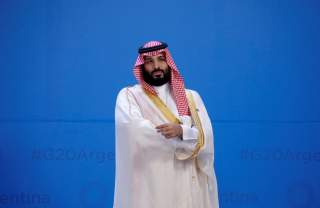 After having sought negotiations with previous U.S. administrations on civilian nuclear cooperation, Saudi Arabia has recently renewed these efforts with the Trump administration, for the development of nuclear energy, power plants and desalination reactors. Negotiations on a possible deal are ongoing, although according to a recent New York Times article, the administration refuses to say where things currently stand. Saudi Arabia claims that it is seeking purely civilian capabilities, but it has also insisted on retaining its “right” to work on the fuel cycle and enrich uranium, which can lay the ground for a military nuclear capability in the years ahead. However, it is also clear that the Saudis’ nuclear plans are intimately tied to Iran’s, and since 2010 Saudi leaders have become more and more open about the fact that if Iran attains nuclear weapons, they will quickly follow suit. The latest statement was by Crown Prince Mohammed bin Salman (MBS) in March 2018, in the context of an interview to 60 Minutes. He noted that while Saudi Arabia does not want to acquire nuclear weapons, if Iran develops nuclear weapons, so would Saudi Arabia. Generally speaking, the Iranian program has been a trigger for additional Gulf states to establish or revitalize civilian nuclear programs.

The United States has always been very concerned about the proliferation risks involved in nuclear cooperation, and in 2008 it was able to achieve a memorandum of understanding with Saudi Arabia on nuclear energy cooperation whereby the latter pledged to acquire nuclear fuel from international markets, rather than producing it indigenously. But ten years later, it seems that Saudi Arabia no longer views itself as bound by that understanding. The current challenge for the United States is how to insist on what is known as a 123 agreement with Saudi Arabia, meaning that the agreement explicitly denies Saudi Arabia the right to work on sensitive nuclear technologies (enrichment capabilities and plutonium reprocessing), without driving it into the hands of other nuclear suppliers, such as Russia, China and South Korea, that may be less worried about ensuring these restrictions.

There are concerns that the Trump administration might be willing to concede to Saudi Arabia sensitive capabilities, and the fact that it is not willing to divulge information regarding the status of the negotiations does not bode well in this regard. The administration is keenly aware of the link to Iran’s nuclear posture, and that the Joint Comprehensive Plan of Action (JCPOA) set a very negative precedent for nuclear cooperation with other states when it legitimized Iran’s enrichment capabilities. While Iran must cap its stockpile of enriched uranium for the duration of the deal, it is allowed—under the explicit terms of the deal—to work on R&D into an entire range of advanced centrifuges. Iran has plans to install and operate these centrifuges eleven years into the deal. There is a real question of how these capabilities can be denied to states like Saudi Arabia who are in good standing with the NPT, whereas Iran—who blatantly violated the nonproliferation treaty—was granted the right to continue with these dangerous enrichment-related activities.

The dilemmas of nuclear cooperation between the United States and Saudi Arabia have recently come into sharper relief against the backdrop of the Jamal Khashoggi murder at the Saudi consulate in Istanbul last month. This brutal murder, and the ensuing Saudi evasion has sparked a major debate in the United States and around the world about the reliability of MBS as a strategic partner. There are many calls in the United States—from both Democrats and Republicans in Congress—for the administration to not only punish Saudi Arabia for this gross transgression, but to rethink its relations with the kingdom, and certainly not to reward it with cooperation in the nuclear realm.

But Saudi Arabia is not dependent solely on the United States for cooperation in the nuclear realm. Will other potential suppliers be willing to agree not to cooperate with Saudi Arabia unless it forsakes sensitive nuclear technologies? Will they agree to set up a supplier mechanism and insist that Saudi Arabia, and other states seeking nuclear cooperation, can only buy fuel from this source? With lucrative deals on the table, it might prove difficult to garner this kind of commitment. Moreover, there have long been suspicions that, after Saudi Arabia financed Pakistan’s nuclear program, a deal might have been struck whereby Pakistan will return the favor by providing some kind of nuclear cover—whether by transferring technologies directly to the kingdom or providing a nuclear umbrella from Pakistan—in Saudi Arabia’s hour of need. As such, the nonproliferation challenge remains, whether or not the United States concludes a deal on civilian nuclear cooperation. And if it is the United States that makes the deal, it can insist that Saudi Arabia ratify the Additional Protocol (which would grant the International Atomic Energy Administration additional inspections rights), return spent fuel and generally supervise the project.

Beyond attempts to deny Saudi Arabia technologies and capabilities, it is important also to address Saudi motivation for going nuclear. There is no doubt that Saudi Arabian concerns focus on the Iranian nuclear threat; the kingdom’s concern with Iran’s capabilities—as a motivation to go nuclear itself—is reflected in the few explicit Saudi statements on the topic. As long as the motivation to go nuclear remains strong, states are likely to find a way to develop capabilities, even if they have to pay a price for doing so. In Iran’s case, the major motivation for going nuclear is to enhance its hegemonic power in the Middle East—a difficult motivation to address. But in the case of Saudi Arabia, if strong international powers—the P5+1 and perhaps others—were to take a harsher stance on Iran’s regional aggressions and missile developments, and were to cooperate in order to improve the provisions of the JCPOA, this would most likely have a direct and favorable impact on Saudi Arabia’s calculation of whether or not to develop nuclear capabilities.

Additionally, without minimizing the impact of the crisis atmosphere surrounding the Khashoggi affair, it is nevertheless important to consider whether significantly downgrading ties with Saudi Arabia is the right way to go, from a proliferation point of view. While this might not be the most opportune time to reward the Saudi’s desired nuclear cooperation, U.S. security guarantees to the Saudis could be another route to lowering their motivation to achieve a nuclear deterrent vis-à-vis Iran.

A decision by the U.S. administration (or for that matter any other supplier) to allow Saudi Arabia to have enrichment capabilities will confront Israel with a dilemma. On the one hand it has been Israeli policy to do its utmost to deny any neighboring country with whom it does not have a peace treaty the means to acquire and develop a nuclear program. If Israel remains loyal to this approach, it should seek to deny Saudi Arabia enrichment capabilities. In practical terms this would imply making its opposition known in Washington. On the other hand, given the “tactical alliance” with Saudi Arabia which has been triggered primarily by the common Iranian threat, Israel could consider sacrificing its long term interest in denying nuclear capabilities for the sake of its current interest in cultivating relations with the Saudis. Israel should support the traditional U.S. nonproliferation policies which allow states to have access to nuclear fuel for civilian purposes, while denying them the option of self production.

Shimon Stein is a senior research fellow at the Institute for National Security Studies (INSS) and a former Israeli ambassador to Germany (2001-2007).