Can Washington Confront Russia, China and Terror All at Once? 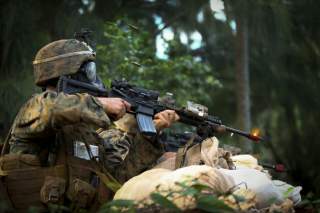 Much has changed in the fifteen years since the 9/11 attacks. The “low-end” threat posed by terrorist organizations continues. But there is growing recognition that the U.S. military must also be prepared to meet “high-end” threats from potential adversaries like Russia, China, Iran and North Korea.

While America was fighting in Afghanistan and Iraq, Russia and China focused on the future: increasing their defense spending, growing their forces, modernizing nuclear capabilities and infrastructure, and capitalizing on any opportunities to advance their interests. Iran continues to develop its ballistic-missile capabilities, provide support to terrorist organizations and undermine U.S. interests throughout the Middle East. North Korea has also made frightening advances in its nuclear weapons and missile capabilities, posing a threat not only to U.S. allies and forces in the Pacific, but even the homeland. In short, today’s military must be prepared for threats like 9/11 as well as those more reminiscent of the Cold War.

Yet America’s ability to defend her interests has weakened. The 2016 Index of Military Strength assessed that the U.S. military is only “marginally able to meet the demands of defending America’s vital national interests.” At least three factors have contributed to this weakness. First, while defense spending increased after 9/11, the defense budget has fallen by 25 percent in real terms since 2011. Second, ongoing missions (Afghanistan, Libya, Iraq, etc.) have required a significant investment of money, time and equipment. Third, much of the military’s equipment has aged at an accelerated pace due to a decade of continuous use and high operational tempos. However, we continue to rely on legacy platforms and systems (including our decaying nuclear infrastructure) due to a lack of investment and poor acquisition outcomes. According to Deputy Secretary of Defense Robert Work, “our strategic muscles [have] atrophied.”

So where does that leave the U.S. military today? Is it comparable to the military at the end of the Cold War or the start of the war on terrorism?

Today’s Navy is 13 percent smaller than it was on 9/11, 48 percent smaller than at the end of the Cold War and has 22 percent fewer ships than the 350 recommended in the Index of Military Strength. Demand for ships has increased even as their number has dwindled. This has forced the Navy to extend deployments, increasing stress on sailors, their families and the ships themselves. Naval aviation is also stressed, with the number of accidents rapidly increasing.

Today’s Army has 11 percent fewer brigades than it did on 9/11, 45 percent fewer than during the Cold War and is 38 percent below the force size recommended in the Index. Readiness is a problem as well. Top brass report that only a third of the brigades are ready for high-end combat. Gen. Mark Milley, Chief of Staff of the Army, says that the military would face “high military risk” if it were to fight a serious war.

Today’s Air Force fields 21 percent fewer tactical fighters than on 9/11. That’s 17 percent below Cold War levels and 5 percent under Index recommendations. The aging fleet has seen an average of three decades of service and the current pace of procurement is struggling to keep up with the retirement of legacy aircraft. Testifying before the House Armed Services Committee, Secretary of the Air Force Deborah Lee James and former Air Force Chief of Staff Gen. Mark A. Welsh III warned that “technology and capability gaps between America and our adversaries are closing dangerously fast.” The Air Force also suffers readiness problems (only half of all its squadrons are ready to face serious combat) and is short four thousand mechanics and seven hundred pilots.

Today’s Marine Corps is down only one battalion from 9/11 levels, which falls far short of the Index’s recommended thirty-six battalions. Moreover, Marine aviation has a readiness crisis, with as little as 30 percent of some types of aircraft ready to fly and repairs being made with parts from museums. The rate of serious Marine aviation accidents has soared, likely due to training and maintenance shortages.

Across the board, the U.S. military has grown smaller, older and less ready. But those in uniform are expected to continue fighting terrorists while preparing for the rising threats posed by great powers and rogue regimes. The combination of growing threats and a weaker military leaves the United States in a dangerous position.

To turn things around, Congress and the next president will need to immediately begin working together to rebuild the U.S. military. Emphasis should be placed on three achieving three goals. The first is to restore combat readiness by increasing the investment in training and maintenance. The second is to beef up force structure, so our forces will have the ability to handle two conflicts simultaneously (today they can barely handle one). The third is to invest in modernization, so that the military will be prepared for the future.

Achieving all three goals will require money. For fiscal year 2017, the base budget for national defense budget should be at least $600 billion. Overseas contingency operations should be funded fully and separately.

Rachel Zissimos is a research assistant in The Heritage Foundation’s Center for National Defense. Justin T. Johnson is the center’s senior policy analyst for defense budgeting.