Can We Align Third World Development with Net Zero? 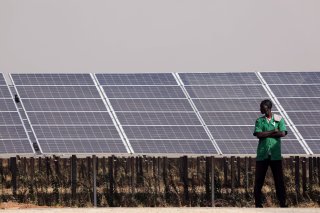 IN THE past decade, emissions from the developing world have eclipsed those of the West. China, still considered a developing nation, now pumps more CO2 into the atmosphere than the entire developed world combined. India, with its booming economy, could surpass the United States’ carbon output by 2030. All across the Global South—from Indonesia to Libya to Vietnam—people are using more energy and building out more fossil fuel infrastructure than ever before.

This poses a serious challenge to the prevailing orthodoxy in Western climate policy. Until recently, conventional wisdom held that the key to climate action lay with the West: if the United States and Europe could just decarbonize, many reasoned, then global emissions would plummet. But today, the West is decarbonizing—Europe has seen its emissions drop by 24 percent since 1990, and America’s CO2 output is falling every year. Even as the ongoing energy crisis forces countries like Germany to reopen their coal plants, it has simultaneously led Europe to double down on its clean energy commitments—from fifty-billion-dollar nuclear build-outs in France to doubled wind power investment in the Netherlands. Nonetheless, the world’s emissions continue to climb. The reality is that the vast majority of future emissions are coming—and will continue to come—from the developing world.

That is the bad news. But there is good news too: in the vast majority of industrializing countries, the quality of life is skyrocketing—life expectancy has shot up, and child mortality is down nearly 70 percent. By nearly every metric, from income to living conditions to quality of education, people in the developing world are living healthier, happier lives than they were fifty years ago.

Oil, gas, and coal have been crucial to this development. Indeed, in cooking fuels, in factories, and in most national grids, fossil fuels play a vital role in developing economies. But herein lies the tension in the push for global decarbonization: as economies grow, so too does the demand for energy. Emissions, inevitably, go up. And with a Global South that is poised to industrialize, this tension could grow into the defining climate issue of the twenty-first century.

THE CURRENT outlook for global energy use is not what it was half a century ago. Climate change is a leading issue in public discourse. Renewables and fracked natural gas have all but replaced coal power in North America. Solar is now the cheapest electricity source in history. By all accounts, a new global energy economy is emerging.

But with a system as complex as a national energy grid, competitive prices alone are not enough to spur third-world decarbonization. Questions remain about the reliability of renewables, and path dependence—the notion that energy systems are prone to “technological lock-in”—is a real phenomenon. Vietnam is currently building coal plants, as one report from the Center for Strategic and International Studies (CSIS) puts it, for the simple reason that it built coal plants in the past.

Years of fossil fuel dominance—combined with renewable energy’s continued limitations—have put economic growth at apparent odds with net zero in the developing world. What is to be done?

The world of climate and energy policy is divided on the appropriate response to this challenge. So-called “ecomodernists,” for example, argue that developing economies should pursue a by-any-means-necessary approach to industrialization. In practice, this means that, as demand rises, countries will look to cheap, non-intermittent energy sources like natural gas. Though emissions will increase, so will prosperity—and the West, ecomodernists contend, has no right to get in the way. Alex Trembath, the deputy director at the Breakthrough Institute, an ecomodernist think tank, explains:

The wealthy world should not impede lower and middle-income countries from exploiting natural resources that we also currently use. That means coal, oil, and natural gas principally—but in a more sweeping view, poor countries should be able to determine their own destiny as best they can.

Ecomodernists like Trembath argue that the West itself relied heavily on fossil fuels when it industrialized. Demanding that poor countries do otherwise would therefore represent a major double standard. But this isn’t just the most moral way of thinking about development—it’s also the most practical. As Tembath elaborates, “A world with higher emissions that is warmer, but wealthier, will be better able to deal with climate change than a world with lower emissions, less warming, and less wealth.”

This last point has been the cause of a good bit of controversy in the climate world, particularly amongst “degrowthers”—those who believe that we ought to shrink the economy to fight climate change. That shouldn’t come as a surprise; the idea that higher emissions are a necessary evil runs contrary to any number of preexisting environmentalist dogmas.

But there is a growing body of research to support the ecomodernist view, especially within the context of natural disasters. To be sure, one of the chief concerns surrounding climate change is that it will increase the frequency of destructive weather events such as flooding, hurricanes, and drought. But while the rate of natural disasters has certainly been increasing, the impact of those disasters has dropped dramatically. Since the turn of the twentieth century, as the global population has ballooned and infrastructure has seen rampant growth, deaths due to disaster have declined by over 90 percent. Economic damage as a percent of national GDPs has fallen precipitously. In other words, thanks in large part to economic growth and development, the world is getting more resilient in the face of climate risk.

Ecomodernism thus offers an alternative framework for thinking about climate change: rather than treating warming as the singular measure of climate risk, why not weigh climate impacts against the world’s preparedness to confront them?

To be sure, the data surrounding natural disasters may not capture the whole story. Warming’s effect on geopolitical or strategic interests, for example—its impact on agricultural regions in nations like the United States, its spurring of mass migration events, and so on—is a somewhat different question. But the ecomodernist “trade-off” framework nonetheless provides the right conceptual approach: understanding that climate adaptation, as it were, will be a vital part of climate action.

THE ECOMODERNIST argument operates on the premise that decarbonization and third-world development are largely orthogonal interests, at least for now. As Trembath pointed out, even the United States has yet to figure out how to decarbonize most industries at scale. Transition will be even harder in low-income economies, where there is a severe lack of funding for renewable energy’s high upfront costs. In other words, maybe policymakers are jumping the gun—maybe the rest of the world isn’t ready to take the necessary steps to build a low-carbon economy.

But some thinkers in climate and energy policy argue that aggressive low-carbon development will be a boon, rather than a barrier, to economic growth. In this view, the world is moving inexorably towards net zero. Industrializing nations thus have a material interest in doing the same.

In many ways, where you land on this question depends on what you think the world will look like in twenty to thirty years. Is the energy sector running on solar, nuclear, and next-generation clean technology, or are fossil fuels still the norm? Do electric vehicles dominate the market, or do they still just occupy a niche? Have we cracked the code on low-carbon steel manufacturing? On hydrogen? On battery storage?

Ecomodernists like Trembath believe that the burden of proof still falls with the developed world: it is the West that ought to demonstrate the scalability of clean technology before expecting low-income countries to do the same. But many are looking at the pace of the clean energy transition and concluding that it’s not a question of if the world can go net zero, but a question of how fast. From that point of view, developing countries would stand to benefit from planning for a carbon-neutral world, even if carbon-neutrality still remains elusive.

One of these individuals is Joseph Majkut, director of the Climate Change and Energy Security Program at CSIS. “If you're a country aiming to grow your role in the global economy, it’s better for your long-term prospects to be focused on a development portfolio that can participate in a global economy that is mostly at [net] zero.” In Majkut’s view, there’s also an opportunity for the United States here—not as the world climate police, but as investors in the developing world’s green transition. If American companies make foreign direct investments FDIs) in lower-income energy economies, “it will pay off—and create a supply chain for clean technology and critical minerals that is far more robust than the one we have now.”

Investment in the developing world carries its own risks. Governments can be unstable, restrictions on foreign firms can be severe, and more. But these investments work. A recent study from the London School of Economics found that the last two decades of green FDIs have not only strengthened the innovation capacity of foreign subsidiaries, but actually sped up the green specialization of the investing firms. In other words, when multinational corporations invest in the developing world’s renewables industry, they’re also strengthening their own cleantech knowledge base. This is of significant relevance, given that the International Energy Agency has called for a more than tripling in annual clean energy investment to reach the 2050 net-zero target—the majority of which will go to the developing world.