Can We Stop the Slow Slide to a U.S.-Iran War? 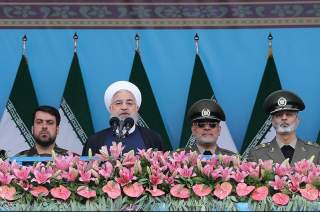 Secretary of State Mike Pompeo reportedly told a group of Iranian-American community leaders the United States’ best interest is “a non-revolutionary set of leaders leading Iran.” Meanwhile, the U.S. State Department announced the end of waivers for countries to import Iranian oil to drive Iran’s exports to zero. “They truly believe that they can … collapse Iran’s economy and bring it into recession and essentially bring the Iranians to their knees, to the point where they’re either coming to us and begging for talks, or where we’re essentially leading to regime collapse and something follows on,” said Richard Johnson, one of the State Department’s former top experts on nuclear issues.

Two weeks after President Donald Trump designated Iran’s elite Revolutionary Guard Corps (IRGC) as a foreign terrorist organization, Iranian supreme leader Ayatollah Ali Khamenei appointed Major General Hossein Salami as the new head of the IRGC. Iran’s National Security Council designated the U.S. Central Command (CENTCOM) as a terrorist organization, called the United States a sponsor of terrorism, and warned of the consequences of its moves toward peace and security in the Middle East. In early 2019, Major General Salami warned Israel that the outbreak of a war with Iran would result in the elimination of Israel. With Netanyahu now entering a fifth term as prime minister of Israel, the already-disastrous Israeli-Palestinian relationship is likely to be made much worse for the region with the release of the Trump administration’s peace plan. Furthermore, a ramping up of tensions with Iran seems more likely because Bibi is the devil on Trump’s shoulder, whispering provocations into his ear.

However, containing the current confrontational trend is an option on the table. There are several constructive historical incidents between Iran and the United States worth considering.

First, in the late 1980s, Iran welcomed a proposal by the United States to improve relations—encapsulated by the elder President George Bush’s declaration that "goodwill begets goodwill." At that time, I was mandated by the late President Hashemi Rafsanjani to pursue this matter. With the support of the IRGC’s Quds Force, Iran facilitated the release of American and Western hostages in Lebanon, but the United States responded by heightening pressures and hostilities.

Second, after the terrorist attacks of 9/11, the United States asked Iran for help in its so-called “war on terror” in Afghanistan. In the meantime, Iran decided to aid the United States in efforts to defeat the Taliban in Afghanistan. This time, too, the IRGC’s Quds Force was instrumental in paving the path for the U.S. military campaign to remove the Taliban in 2001. In return, President George W. Bush named Iran a member of the “axis of evil,” which was shameful in every possible way.

Third, after the United States went into a ruinous war with Iraq in 2003, America again needed Iran’s help to manage Iraq post-Saddam. Virtually all major Shia-led opposition groups to the Saddam Hussein's dictatorship were residing in Iran. The IRGC’s Quds Force facilitated their return and cooperation with U.S. CENTCOM. Iran’s goodwill in Iraq, too, did not receive a positive response.

Forth, in early January 2016, when two U.S. Navy riverine command boats illegally entered into Iranian territorial waters and sixteen American sailors were captured, then-Secretary of State John Kerry called Foreign Minister Javad Zarif and asked for immediate assistance. The sailors were released, safe and sound, and without any trials fifteen hours later. I personally asked Minister Zarif: how did you facilitate their release so quickly? He replied: “this was made possible solely due to IRGC’s collaboration.” Imagine if such an incident occurs today?

These are historical examples proving Iran assisted the United States while its goodwill’s never begot goodwill on the part of the Americans. A negative consequence of the current escalation of U.S. hostility with Iran is that Washington cannot reach out Iran for logistical and strategic support in the future.

Over the past two decades, the U.S. Army, as the most powerful force in the world, has faced humiliating defeats in the Middle East. It has waged wars in Afghanistan and Iraq while participating in military operations in Libya, Yemen and Syria, but all with tangibly negative outcomes. For instance, after seventeen years of occupying Afghanistan, billions in U.S. aid have failed to defeat the Taliban—instead, the United States is negotiating with the Taliban after they have taken over half of the country. The United States also fully supported the Saudi war on Yemen, which has created the world’s largest humanitarian disaster. Repeatedly, Trump has said that the United States “stupidly” spent $7 trillion in wars such as Afghanistan and Iraq. Now the U.S. Army is operating in a risky climate in the region, with heightened risks of confrontation.

It is crucial to note that the IRGC and the Quds Force have been on the forefronts of fighting ISIS terrorism. Iraqi officials frequently have confirmed that without Iran’s contribution, the central government in Baghdad would have fallen apart. The commander of the Iraqi Air Force, Hamid al-Maliki, said Iran is still the “number 1” supporter of Iraq in its fight against terrorism, praising the Islamic Republic’s active role in fighting ISIS. Therefore, the third negative consequence of Trump’s anti-Iran policies is undermining the war on ISIS and Al Qaeda.

A global disaster will occur if Trump decides to mobilize the U.S. Army against the IRGC and the Quds Force in a military confrontation. If he does so, the Middle East and North Africa will turn upside down. Iran has access to tens of thousands of young militants across the region, leading to a situation that will be much graver than that of Afghanistan and Iraq.

Former U.S. president Jimmy Carter just recently said that “the US has only enjoyed 16 years of peace in its 242-year history, making the country ‘the most warlike nation in the history of the world.’ This is ... because of Washington’s tendency to force other nations to adopt our American principles.” Since the Islamic Revolution of 1979, Iran and the United States have practiced the strategy of “No war, No peace.” But with the current U.S. administration’s confrontational strategy, the option of “No War, No Peace” is reaching an end.

Despite their disagreements about internal issues, Iranians will unite to resist U.S. bullying and to defend their integrity and independence. Every economic, military, or diplomatic policy intended to coerce Iran will impede diplomacy and/or coordination in the anti-ISIS campaign. Responsible international, U.S. and regional policymakers must come together to chart a diplomatic course that promotes broad dialogue and engagement with Iran to avoid a possible war.

Ambassador Seyed Hossein Mousavian is a Middle East Security and Nuclear Policy Specialist at Princeton University and a former spokesman for Iran’s nuclear negotiators. His latest book, Iran and the United States: An Insider’s view on the Failed Past and the Road to Peace was published by Bloomsbury in May 2014. For the latest visit:www.hosseinmousavian.com.