Can the West Force Putin’s Russia From Ukraine? 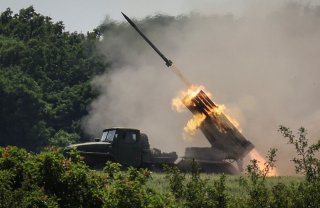 THE WAR began, in Russian president Vladimir Putin’s mind, with two great misconceptions. Peace will only come when the Russian ruler concedes that he was wrongheaded about them.

Thinking he could seize Kyiv in two days, Putin invaded Ukraine on February 24. He believed that Ukraine is essentially a larger Belarus, where nationalism is tepid and disorganized, and where Putin’s armed incursion, in favor of an unpopular Russian puppet, was shorter than most European vacations. He expected that his forces would face token resistance in Ukraine and his total command would take little time to establish. If Ukraine’s resistance was stiff, he expected a repeat of the 2014 seizure of Crimea—a bloody but brief war where the West fired only diplomatic demarches, rather than shipping rockets and artillery shells by the ton.

Putin also imagined that his awesome and awful display of force would intimidate or scatter the European Union and, by extension, NATO. Russia’s gas exports, he knew, were vital for certain members of the EU, especially Germany, continental Europe’s largest economy and its largest bloc in the European Parliament. Putin bet that the Europeans would never reverse their shuttering of coal-fired and nuclear plants, or expand natural-gas imports from the United States and Qatar, or plan new pipelines from North Africa or the Near East. He thought that Europe’s pro-environment sentiments made these shifts unthinkable. Most shocking to Putin’s prewar thinking must have been the abrupt reversal of more than seventy years of consensus on military spending in Germany and faraway Japan. Long anxious to show the world that they would never be World War II-style military powers, both nations suddenly announced bigger budgets for their armed forces, including the steepest increases seen since the end of the Cold War.

So, how can the world influence Putin to withdraw, not escalate?

First, it must unite to support Ukraine as an independent, sovereign, and democratic country. Germany’s recent announcement that it supports Ukraine’s territorial integrity, “including Crimea,” should end all talk of Ukraine trading territory for peace.

Next, military and economic growth must be fostered and fueled. A weak and vulnerable Ukraine will only invite renewed Russian aggression. The reconstruction of Ukraine will require considerable investment from the private sector. But private-sector investment depends on a generally secure environment.

The United States has a historic opportunity to build with its allies the best deterrent against future Russian aggression and help address the endemic culture of corruption in Ukraine through a well-conceived mini-Marshall Plan.

What has been eroding for some years now is the commitment of American leaders to defend, maintain, and advance an international order in which nations observe common rules and standards; embrace liberal economic systems; renounce territorial conquest; respect national sovereignty; and adopt participatory, democratic systems of government.

In today's increasingly complex global environment, the United States can only achieve this goal by leveraging its strength through a cohesive foreign policy that responds to the challenges posed by Russia and China. To do this, it must deliberately strengthen and cultivate productive relationships with its allies, partners, and other nations with common interests.

The United States must offer attractive political, economic, and security alternatives to China's influence in the Indo-Pacific, Africa, and beyond.

Universal principles can be combined with recognizing the reality of other regions’ histories, cultures, and perspectives on their security.

In 2014, Henry Kissinger wrote: “The celebration of universal principles must go hand in hand with the recognition of the reality of other regions’ histories, cultures and points of view on their security.” We should learn from these wise words and avoid our own great misconceptions.

Ahmed Charai is the Publisher of The Jerusalem Strategic Tribune. He is on the board of directors of many think tanks including the Atlantic Council, the International Crisis Group, the Center for Strategic and International Studies, the Foreign Policy Research Institute, and the Center for the National Interest.