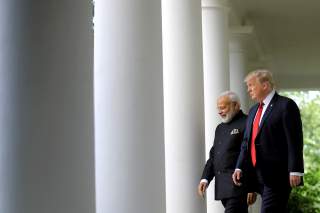 The United States must infuse its relationship with India with a renewed sense of energy and purpose. India’s rise is one of the most significant geopolitical developments of the twenty-first century. With astute policies, the United States could be one of the greatest beneficiaries of India assuming its rightful place as a leading global power. However, putting India policy on auto-pilot based on the faulty assumption that a strategic partnership will blossom on its own could lead us to miss an historic opportunity.

India is poised to have the world’s largest population by the middle of the next decade. With economic growth at over 7 percent, India is the fastest growing major economy, outpacing China. It now ranks as the sixth largest economy and is on track to be the third largest by 2030 and the second largest by 2050. Moreover, India’s military is the world’s third largest and its capabilities are steadily improving.

A stronger India offers the prospect of a more stable balance of power in the Indo-Pacific, the world’s most economically dynamic region which stretches from the eastern shores of Africa to the west coast of the Americas. India’s democratic model of development presents a stark contrast to China’s authoritarianism for emerging nations in Africa and beyond. And its steady rise into the ranks of great powers offers the prospect of a potent amplifying voice that shares our fundamental values.

As the world’s oldest and largest democracies, respectively, the United States and India begin their constitutions with the same three words: “We the people.” Our countries are blessed with diversity. We are at our best when all of our citizens—men and women, religious and ethnic minorities, and the historically disadvantaged—have the means to succeed; we suffer when there is inequality and division. India, like the United States, recognizes its imperfections, and yet it has stubbornly, even improbably, maintained its commitment to the often-cumbersome machinery of a democracy which separates power among different branches of government, guarantees the rights of states in a federal structure and enshrines fundamental individual rights in its constitution.

Yet, despite our shared values, the U.S.-India relationship got off to a late start, hamstrung by tensions that kept ties at arms-length for much of the Cold War. The relationship only began to warm after the collapse of the Soviet Union, and following a temporary setback with India’s nuclear tests in 1998, successive U.S. and Indian administrations took strategic decisions to put U.S.-India ties on a stronger footing.

As Prime Minister Narendra Modi recently put it, our partnership “has overcome the hesitations of history.” Bilateral trade has more than doubled from $58 billion in 2007 to $125 billion in 2017; Prime Minister Modi has visited the United States five times since coming to power in 2014; over forty governmental dialogues and working groups have proliferated to cover a range of subjects from cybersecurity and counter-terrorism cooperation to commercial and defense ties.

President Donald Trump’s administration has made a promising start with its early pronouncements. An inaugural “two-plus-two” meeting between the U.S. secretaries of defense and state with their Indian counterparts took place in early September. The National Security Strategy’s explicit welcoming of “India’s emergence as a leading global power and stronger strategic and defense partner” is on the mark. These words must now be translated into action.

Indeed, we have a profound interest in facilitating India’s rise, but it is not difficult to imagine how India policy could be relegated to the back burner given the immediate priorities facing the United States—from North Korea and Iran, to active military operations in Afghanistan and Syria, to the threat of international terrorism. Not surprisingly, these complex challenges tend to consume the time and energy of decision-makers in Washington, leaving little bandwidth for equally significant long-term strategic priorities.

But it would be a mistake not to pay sufficient attention to India, which can help offset two troubling geostrategic trend lines in particular. Russia is employing multiple forms of hard and soft power to violate the sovereignty of its neighbors, assert itself in the Middle East, and undermine NATO, the European Union and Western democracies. China is challenging international law and the rules-based order that has prevailed in Asia since the end of the Second World War, threatening freedom of navigation, rapidly modernizing its military, establishing a military presence in the Indian Ocean and launching the Belt and Road Initiative—an ambitious mercantile project which stretches across Asia and into Africa, the Middle East and Europe. A rising India, integrated with global governance structures, can counter-balance these trends and introduce greater stability into the international system, but this will require significantly upgrading the U.S.-India strategic partnership.

For all the positive pronouncements and real progress, the relationship still has an unfocused quality and it remains vulnerable to shocks. To help build resilience and to fully realize the potential of the relationship, the United States should follow a five-part strategy: embrace India as a global strategic partner, boost economic ties, deepen defense and security cooperation, promote greater connectivity between our citizens and actively oversee the relationship from the White House and Congress.

THE U.S.-INDIA relationship does not fit into the traditional paradigm of an alliance. As a founder of the Non-Aligned Movement, India’s post-independence doctrine of ‘strategic autonomy’ is a firmly held principle. That does not diminish the intrinsic value of a strategic partnership with a rising India for the United States. As Vice President Joe Biden told an audience in Mumbai in 2013, “There is no contradiction between strategic autonomy and strategic partnership.”

As two countries sharing the same values and holding similar outlooks, more often than not, we will increasingly find our views in alignment on the major international challenges of the day. Our relationship needs to be less about the tactical level details of a host of bilateral issues, and more about strategic cooperation on a range of global challenges from development to climate change and international security.

India’s transition from an aid recipient to an international aid donor presents an important opportunity to forge a comprehensive economic development partnership that is Indian-led. India has much to offer other developing countries given its own success in dramatically reducing the number of people living in poverty. The Indian government has been able to take innovations from remote corners of the country in sectors such as agriculture and maternal and infant health care and scale them up to improve the lives of millions.

India is already sharing its advances in agriculture, health and energy with countries in Africa, where it enjoys strong historic ties. Moreover, many of these countries can learn from India’s ability to turn its demographic profile into an advantage that drives economic growth. Roughly half of India’s population is under the age of twenty-five. Countries such as Uganda, Chad, Niger and Mali face even steeper demographic challenges with over 65 percent of the population under twenty-five. India also has become a significant donor to Afghanistan, where U.S. troops lead an international coalition.

Working together, the United States and India can promote a sustainable model of economic development in Africa and Asia that stands in sharp contrast to China’s mercantilist approach that too often pushes countries deep into debt. The BUILD Act, which Senator Chris Coons introduced with Senate Foreign Relations Committee Chairman Bob Corker, creates the U.S. International Development Finance Corporation to catalyze private sector investments in achieving economic development objectives. It offers a ready-made platform for cooperation with India in Africa and across the Indo-Pacific, where Japan and Australia can also be partners. Economic development coordination among the members of the Quad (the United States, India, Japan and Australia) could directly compete with China’s Belt and Road Initiative in a way that advances good governance and the rule of law, as well as international standards for environmental and labor rights.

Climate change is another significant global challenge that demands cooperation between the U.S. and India, the second and third largest greenhouse gas emitters, respectively. The Trump administration unwisely pulled the United States out of the Paris agreement, but the reality of climate change is not going away. It is in our self-interest to partner with India in achieving its target of 175 gigawatts (GW) for renewable energy production by 2022, including 100 GW from solar energy. One positive step the United States could take would be to join the New Delhi-based International Solar Alliance, which aims to spur solar innovation, research and development, and technologies that would benefit American companies, universities and consumers.

More broadly, we should welcome greater global stewardship by India. To that end, the Trump administration should throw its diplomatic weight behind India’s entry into the key international political, economic and security governance bodies. As Asia’s third largest economy, India clearly belongs in apec, but now it must go further. The time has come for India to have a permanent seat on a reformed United Nations Security Council, which the Trump and Obama administrations have endorsed. Similarly, it is in the world’s interest for India to be in the Nuclear Suppliers Group, which is designed to prevent nuclear proliferation. Of course, the United States alone cannot decide on India’s membership in these bodies and will need to overcome resistance from countries such as China. Finally, if there is to be an honest discussion about expanding the G-7 to include genuine democracies with the world’s largest economies, by any measure India belongs in this group before countries whose commitment to democracy has been demonstrably abandoned.