A Cease-fire or Quagmire in Gaza? 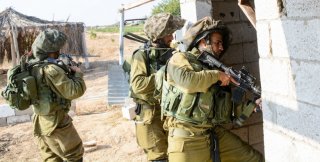 There was a good reason why, for the past five and a half years since Israel last invaded the Gaza Strip in January 2009, Israel’s generals were reluctant to send their troops back in. They knew that while getting into Gaza would be easy for the mighty Israeli army, getting out would not be. This is a lesson that the IDF learned the hard way after it spent eighteen years in a costly, protracted, occupation of southern Lebanon (it is also a lesson that the United States has learned after its bitter experiences in Iraq and Afghanistan). So while hawkish right-wing Israeli politicians often called for the IDF to conquer the Gaza Strip in response to sporadic rocket fire from Palestinian militant groups, Israel’s military establishment counseled caution.

The failure of Israel’s aerial campaign to stop the incessant rocket fire from Gaza during the first ten days of “Operation Protective Edge,” Hamas’ rejection of the Egyptian cease-fire proposal and its attempt to send a group of fighters into Israel via one of its underground tunnels, together with the mounting domestic political pressure upon Prime Minister Netanyahu from his right-wing ministers (particularly Avigdor Lieberman and Naftali Bennett) has now led the Israeli army back into the Gaza Strip, albeit not yet deep inside.

Now that Israeli soldiers are in Gaza, how will Israel get them out?

The obvious answer is a lasting cease-fire, not merely a temporary truce (a peace treaty with Hamas is out of the question since the group is not even willing to accept Israel’s existence). Achieving such a cease-fire is now the focus of intense international efforts, as U.S. Secretary of State John Kerry, UN Secretary General Ban Ki-Moon, and Palestinian Authority President Mahmoud Abbas have all been engaging in shuttle diplomacy between Egypt, Qatar, Turkey and Israel.

The problem is that although both Israel and Hamas publicly declare their willingness for a lasting cease-fire, neither is willing to accept one on terms that are acceptable to the other. Neither is willing to allow the other to claim any kind of victory, and both are determined to ensure that their sides’ sacrifices and losses have not been in vain. Both believe that they have gone too far to turn back now, and that were they to do so, their own publics would punish them. Crucially, both still believe that time is on their side and that, sooner or later, the other will crack—Israel is confident that Hamas will soon want to stop the military beating it has been taking; while Hamas is equally, if not more, confident that mounting international condemnation of Israel for Palestinian civilian casualties will soon compel Israel to stop its assault.

In concrete terms, what this means is that Hamas is adamant in its demand that the blockade of Gaza, enforced to varying degrees by Israel and Egypt since 2007, must end. Hamas also insists that Palestinians who were rearrested after they were freed in the Gilad Shalit prisoner-exchange deal be immediately released. Hamas has stuck to these demands—which have now also been embraced by the Palestinian Authority—since the beginning of this latest round of conflict, and its leadership, chiefly Khaled Mashaal, shows no signs of compromising. For Hamas, ending the blockade of Gaza is the primary rationale for the war, and the key to the movement’s economic and political survival. Giving up this key demand now, or even trusting the Egyptians and Americans to endorse it later, once the fighting is over, is tantamount to defeat.

Israel, for its part, is now less willing to accept what it initially would have—“quiet for quiet” as Netanyahu succinctly put it before the rockets started raining down on Israeli towns and cities. This was basically the formula that ended the last round of fighting between Israel and Hamas in November 2012 and it succeeded in bringing about eighteen months of relative peace for Israelis as Hamas adhered to the cease-fire and, for the most part, ensured that other militant groups did too.

Now that almost all of Israel is within the range of Hamas’ rockets and the existence of its extensive tunnel networks (many of them reaching into Israel) is public knowledge, it is much harder for Israel’s political leadership to agree to return to the status quo ante. Israelis are no longer willing to live with the threat of Hamas rockets and “terror tunnels,” and periodic military operations to “mow the grass” (the Israeli euphemism for trying to restore Israeli deterrence by occasionally inflicting a harsh punishment upon Hamas, if not Palestinians in general) are now seen by many as insufficient. What more and more Israelis are demanding instead is dealing with the problem once and for all—whether through the military reoccupation of the Gaza Strip or its demilitarization with the help of the international community and Palestinian Authority. A long-term cease-fire agreement that leaves Hamas, its tunnels, and the remains of its arsenal in place is not something that most Israelis will accept. For Prime Minister Netanyahu himself it could be political suicide.

What each side now wants—the lifting of the blockade, the demilitarization of the Gaza Strip—the other is not prepared to accept. Until this changes, a durable cease-fire is highly unlikely. While Israel may agree to relax some of its restrictions on the movement of goods and people in and out of Gaza, and Egypt can reopen the Rafah border crossing in coordination with the Palestinian Authority, Hamas is highly unlikely to agree to give up its weapons since this would entail abandoning its commitment to armed “resistance” against Israel, which is central to the group’s identity and popular appeal. Israel will not want to open Gaza’s borders as long as Hamas can import weapons and even concrete for its tunnels.

If a mutually agreed-upon, lasting cease-fire is impossible to reach, Israel faces a stark and difficult choice—either withdraw its forces, unilaterally declare a cease-fire and hope that Hamas and other armed Palestinian groups will respect it, or else move deeper into the Gaza Strip, hitting Hamas even harder (and killing more innocent Palestinians in the process) until Hamas eventually capitulates. But if this doesn’t happen, then Israel could end up occupying Gaza and fighting against a long insurgency by Hamas and a host of other militant, and even more radical, groups. No doubt, Israel and the Palestinians would pay a terrible price for this. Without a lasting cease-fire soon, therefore, Israel could easily find itself in a quagmire in Gaza.

Dov Waxman is Professor of Political Science, International Affairs and Israel Studies at Northeastern University and the co-director of its Middle East Center. He is the co-author of Israel’s Palestinians: The Conflict Within (Cambridge University Press, 2011) and the author of The Pursuit of Peace and the Crisis of Israeli Identity: Defending / Defining the Nation (Palgrave Macmillan, 2006).