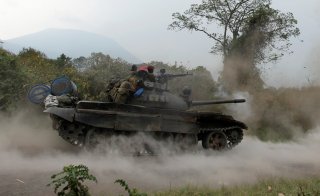 With the war in Ukraine raging on and the Indo-Pacific balance narrowing, it is easy to lose sight of the more “apparently” prosaic conflicts, such as the Kivu conflict, which are still of great importance to international affairs. On December 5, U.S. secretary of state Antony Blinken spoke to Rwandan president Paul Kagame on “the importance of peace and stability in the eastern Democratic Republic of the Congo” (DRC). An American presidential public rhetorical intervention, despite the current global state of affairs, indicates the degree to which major powers continue to have an interest in preventing an explosive conflict between Rwanda and the DRC, alongside preventing actors such as Russia from exploiting the strategic space to manipulate the situation.

A Genealogy of Conflict

Defined by weak states, porous borders, and endemic ethnic rivalries, African politics are often considered too messy for strategic analysis. Yet African questions should be viewed through a strategic lens. Strategy is synonymous with organized political units, whether state or sub-state. And actors in the eastern DRC are today pursuing objectives eminently recognizable to strategic thinkers.

The eastern DRC’s political dynamics are deeply intertwined with those of Rwanda, Burundi, and Uganda. All gained independence by the early 1960s under autocratic regimes. The Hutu, Tutsi, and Twa ethnic groups are all present in each state, meaning political-military actors are interlinked. For example, the Rwandan Patriotic Front—Rwanda’s ruling party—was founded in post-Idi Amin Uganda by refugee Tutsi intelligentsia.

These dynamics led to a strategic explosion. The Tutsi RPF won the Rwandan civil war, triggering Hutu refugee flows into the eastern DRC, creating an intolerable situation for Rwanda. Congo Basin refugee movements are not simply a question of displaced persons. Armed groups take their entire logistics system with them and use new refugee camps as operational bases. Hence Rwanda sought control over the Kivu Region in the DRC’s east as a buffer zone, and ultimately invaded it. The new leader, Laurent Kabila, was far less compliant than hoped. Hostilities resumed in 1998, pitting a Rwanda-Burundi-Ugandan coalition against the DRC, which received support from Angola, Chad, Zimbabwe, several other states, and a variety of Hutu armed groups.

The Sun City Agreement formally settled the Congo War, stabilizing Kinshasa, the DRC’s capital. But it did not resolve the fundamental strategic questions that defined Rwandan, Ugandan, and Burundian interests and engagement in the Congo Basin. Kivu Region, now divided into three provinces, is the strategic key to the Central African puzzle. Military-operational and geo-economic forces intersect in Kivu to make it the consistent focal point of regional tensions.

Kivu is awash with resources, including gold, copper, cobalt, manganese, lead, and zinc. This alone makes it valuable for the DRC government, valuable enough to consider an invasion in order to preserve its strategic interests. The area’s geography, however, modifies the situation further. Understanding the DRC’s position as Africa’s heartland is integral for understanding the conflict. Relatively distant from the open ocean but still resources rich, the DRC has only one major port, far to the west in Matadi. Any power that can exert security control over Kivu can tax all imports and exports between the DRC and the Indian Ocean.

In military terms, the Kivu Region is an ideal base for any group that seeks to disrupt the region. Kivu has several large cities, namely the million-resident Goma, and a variety of refugee camps built up over thirty years of mass displacement. This is ideal territory for a flexible insurgent group—explaining the some thirty-plus armed groups that are based around Kivu. DRC state weakness has allowed these armed groups to survive even without state support.

In order to exert control, Rwanda has pursued a strategy of political manipulation, mixing active military deployments with long-term proxy pressure to maneuver between rivals Burundi and Uganda. Kigali, however, must balance its desire to press its interests and exert power with its need to prevent political isolation. Kigali should not be underestimated and if its interests are perceived as threatened, they will respond with significant force.

Rwanda’s objective in Kivu is to ensure access to and control over trade routes and resources. The government in Kinshasa is too remote, limiting direct strategic influence. But it can be cajoled through the prudent sponsorship of armed groups, for which there is extremely fertile ground in Kivu. Rwanda initially sponsored the M23 movement alongside Uganda in 2012-2013, manufacturing a year-long conflict, ultimately prompting UN intervention. Rwanda was able to maintain some control, and Uganda and Rwanda received and “demobilized” elements of M23 in 2013. However, the situation remained fluid. Other armed groups like the jihadist-affiliated Allied Democratic Forces were still active in Kivu, threatening Ugandan interests. Meanwhile, Wagner Group forces, defined by the U.S. Treasury as a “Russian Ministry of Defense proxy force,” and the deniable vanguard for Russian influence, continue to be active.

The situation continued to deteriorate from 2019 to late 2021. The DRC signed agreements with Uganda and Burundi easing border access for the security forces. Ostensibly, this allows Uganda and Burundi to counter small armed groups, but it also enables Rwanda’s northern and southern neighbors to expand their power in Kivu through military deployments and proxies. It is these sorts of threats that Western decision makers should be most concerned about Rwanda’s military response in the immediate term.

Such threats saw Rwanda reactivating its most useful pressure tool, the M23 group, in late 2021. Rwanda officially denies involvement. But M23 is extraordinarily well organized compared to other armed groups in Kivu, is far better resourced with light artillery and vehicles, and executes offensives like a reasonably professional military. It is therefore more likely than not that the Rwandan Defense Forces are actively supporting M23, and that any response by Rwanda would include M23’s involvement.

There is little indication that the DRC will back down. DRC president Felix Tshisekedi has stated that Congolese should consider the Rwandan government as their enemy. Kagame, meanwhile, accused Tshisekedi of manufacturing the unrest in Kivu to postpone the DRC’s December 2023 presidential election.

The Possibility of War

Kagame is increasingly domestically isolated. He now faces a reasonably competitive Uganda and Burundi, both of which are linked into a broader political network and have better relations with the DRC. In theory, an invasion would break this political situation and enable its reorganization, something very much in Kigali’s interest. But Rwanda would then reckon with conquest, not sub-threshold control. And Kivu is filled with unaffiliated armed groups that will not respond well to Rwandan intervention.

Nevertheless, the way things are progressing, Rwanda may need to re-establish military credibility. Kigali-encouraged M23 offensives are likely to continue and even escalate. Goma could be a target, but considering reinforcements to the city, more likely the Rwandan-backed M23 will target the roads, villages, and checkpoints that regulate the DRC’s eastern border, compelling adversaries to negotiate.

If the DRC does respond militarily, however, Rwanda would be even more likely to directly intervene. Kagame cannot allow himself to be locked out of Kivu. A Uganda-Burundi-DRC entente will not last, and Tshisekedi could lose his domestic power, but this will take too long to materially improve Rwanda’s position. The DRC Armed Forces have received more funding and better training over the past few years, but Rwanda’s military is more professional, effective, and unified. Relative DRC weakness in an open conflict does not reduce the stakes of confrontation. The deterrence calculus that prevents a pre-emptive intervention could entail costs in a reactionary one. But if the balance in Kivu is irreversibly shifted against Rwanda, Kigali will certainly use force to modify the situation and regain strategic control.

This points to the need for decisive Western participation in stabilization efforts. The Europeans and Americans should not pick sides; they must instead identify a balance of mutual economic and security interests between the parties, while also accepting that the territorial boundaries of each state may need to be modified in practice to ensure equitable access and a reasonable settlement.

Refusing to engage carries clear risks. Renewed violence and active Rwandan intervention will trigger a variety of regional effects, including refugee waves. Russia, meanwhile, will take advantage of the chaos through its Wagner proxies. China has already made diplomatic links with each country in question. The United States and its allies must act strategically with decision and speed. The reality, then, is that Africa matters.

Harry Richer is a foreign policy analyst and is currently a senior aide and economic advisor to a member of the UK Parliament. He has extensive experience in these roles having advised other members of the UK Parliament on a range of issues and led numerous national campaigns.