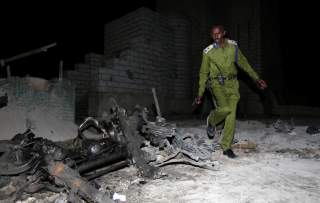 Before September 11, 2001, very few people were concerned with what was happening inside Afghanistan. How could the internal dynamics of a poor country over seven thousand miles away have a direct impact on our lives? That question was answered when Al Qaeda struck our homeland and killed almost three thousand innocent people. In complete shock we wondered, “How could this happen?”

In the aftermath, it was clear that we needed to change our thinking toward weak states on the other side of the world. We could no longer allow them to become safe havens for international terrorists to plot and plan attacks.

In the last seventeen years, we have organized broad coalitions to fight terror groups and prevent future attacks from occurring. We captured 9/11 mastermind Khalid Sheik Mohammed and killed Osama Bin Laden and Abu Musab al-Zarqawi, among others.

More recently, we have been successful on the battlefield against ISIS. After establishing a so-called “caliphate” in Iraq and Syria, American-led forces have retaken much of the land once controlled by ISIS and forced them to splinter their operations.

Many of their fighters have escaped and are regrouping in Africa. They are looking to join other like-minded extremists who share the same goal: to establish a global community that adheres to their flawed interpretation of Islam, wreak havoc on local populations, and attack the West.

Today, it is estimated that ten thousand ISIS and Al Qaeda jihadists have already set up camp across the continent. This is in addition to Boko Haram, Al Shabab, and other extremist groups that have been fomenting violence and spreading terror for many years.

In early August, we commemorated the twentieth anniversary of the bombings of American embassies in Kenya and Tanzania. These heinous attacks killed 224 people. The past is prologue, and if terror groups are left unchallenged, similar attacks could happen again. We need to address this threat right now.

However, this is not something America can or should do alone. We have been leading the charge against terrorism for decades. Our international allies need to step up. African nations are the ones who need to lead this fight. And we can strengthen their hand by passing bipartisan legislation that I have introduced to authorize the Tran-Sahara Counterterrorism Partnership (TSCTP).

Through the TSCTP, the United States works alongside Algeria, Burkina Faso, Cameroon, Chad, Mali, Mauritania, Morocco, Niger, Nigeria, Senegal, and Tunisia to build their military and law enforcement capacity to conduct counterterrorism operations. This partnership also enhances the ability to: monitor, restrain, and interdict terrorist movements; and strengthen the rule of law.

My bill codifies this partnership and allows the TSCTP to confront the ever-growing threat of terrorism in Africa. Furthermore, the bill requires the State Department, U.S. Agency for International Development (USAID) and the Defense Department to coordinate counterterrorism strategy with our African partners and deliver that strategy to Congress.

Boosting the counterterrorism capabilities of these and other countries to better fight terror threats must continue to be a strategic and long-term priority for the United States. By empowering these allies, we’ll narrow the number of places terrorists can survive and thrive.

The Pentagon is openly considering troop cuts and scaled back missions in Central and West Africa. Such cuts would make these partnerships even more vital. A strong and congressionally authorized TSCTP helps keep the pressure on terrorists with fewer Americans being sent into harm’s way.

At this moment, it may not seem like a terror group in the far reaches of Africa could threaten our homeland. But one of the greatest lessons we learned from 9/11 is that a failure of imagination prevented us from taking similar threats seriously. We cannot afford to repeat the mistakes of our past. Terrorism anywhere is a threat to civilization everywhere.

On battlefields all across the world, America has shown the way. For the sake of international security and peace we have sacrificed greatly. My bipartisan legislation presents a new opportunity in this struggle for our African partners to take the lead.

Let’s incentivize and empower our allies to take this fight directly to our enemy before it’s too late.

Michael McCaul is the Chairman of the Committee on Homeland Security and a Senior Member of the Foreign Affairs Committee in the House of Representatives.

Image: A Somali policeman inspects the scene of a suicide car explosion near the parliament in the capital Mogadishu, November 5, 2016. REUTERS/Feisal Oma