The Challenge of Confronting China Over a Gray Zone Crisis 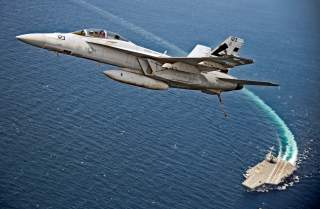 The recent Washington Post op-ed, “China Is Not an Enemy,” is an important response to President Donald Trump and the growing bipartisan consensus in American national security circles that China is likely to become a major U.S. adversary in the years and decades to come.

Some elements of this greater vigilance about China—and Russia—at the Pentagon and elsewhere are welcome. But other elements of the new emerging view could easily be overdone and help create a self-fulfilling prophecy that leads to rivalry or even war between the century’s two great superpowers. That would be an unspeakable tragedy. And it could result in part from mistakes made not just in the People’s Republic of China, but also in the United States.

Unfortunately, the authors fall somewhat short in their recommendations for a U.S. and allied military strategy. They rightly reject war plans that would involve large-scale offensive operations against the Chinese mainland early in a future war, and then argue that: “A wiser policy is to work with allies to maintain deterrence, emphasizing defensive-oriented, area denial capabilities, resiliency and the ability to frustrate attacks on U.S. or allied territory, while strengthening crisis-management efforts with Beijing.”

However, this approach could be too defensive, leaving America and its allies vulnerable to China’s salami-slicing tactics. It fails to explain how to handle gray-zone conflicts where China seeks to expand its influence in places like the South China Sea and East China Sea with offensive actions that nonetheless remain below the threshold of blatant military aggression. Indeed, China has been engaging in such behavior frequently over the past decade and could escalate those interactions in the future.

As I argue in my new book, The Senkaku Paradox, America needs a concept of integrated deterrence that would combine economic warfare with supporting, and generally nonlethal, military actions. For example, if Chinese forces came ashore on one or more of the disputed, small, and uninhabited Senkaku Islands (claimed and administered by Japan, backed up by the U.S.-Japan Mutual Security Treaty, yet also claimed by China), then neither an immediate offensive U.S./Japan military response nor a purely defensive approach would make sense. What we should do instead is place targeted economic sanctions on the Chinese economy and sustain them as long as necessary (having first fortified our own resilience against possible Chinese economic retaliation), fortify the other Senkaku Islands and surrounding waters with U.S. and Japanese military capabilities, and then seek to persuade Beijing to find a diplomatic solution to the crisis—even if that latter effort takes a long time.

The sanctions could involve Trump-like tariffs on most trade with China. They could also direct more targeted punishment against high-tech sectors. Financial sanctions could also be invoked, perhaps further down the line, if the crisis continued or even escalated.

This concept is largely defensive in military terms, yes, but it is quite forceful in another. It would not downplay the significance of China’s actions. It would therefore employ a punitive and coercive whole-of-government approach—ultimately to reduce the aggression, but in the first instance, to make sure that it does not snowball or metastasize.

Those who favor restraint and cooperation in U.S.-China relations—as I do—need to be careful about how they frame their arguments. Some real pushback against Beijing is needed now, as more hawkish voices rightly counsel. But that pushback needs to be judicious, dispassionate and proportionate, especially if and when crises erupt in the future over gray-zone matters that we are not yet prepared to tackle.

Michael O'Hanlon is a senior fellow at Brookings and author of the new book, The Senkaku Paradox: Risking Great Power War over Small Stakes.