Change Is Coming to Cuba 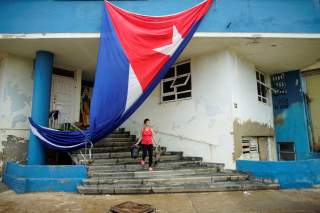 Cuba is adrift—it has been more than a year since Fidel Castro, the socialist caudillo, passed from the scene. Despite long-standing predictions that Fidel’s death would spark great changes in the Caribbean island’s political life, the Castroite state, headed by the 86 year old Raul Castro, remains very much in power.

Raul is set to step down as the Communist Party of Cuba’s first secretary in February 2018, setting the stage for a younger generation to come to the helm. The country’s next leader is expected to be the fifty-seven-year-old Miguel Diaz-Canel, a party loyalist who has been first vice president of the council of state and council of ministers since 2013. A former engineer, he is seen by some as a hardliner.

In a video-taped meeting in early 2017, the presumed next leader of Cuba provided some insights as to his views. During the meeting with other party officials, Diaz-Canel warned of the existence of an “American design” aimed at “political and economic” conquest of Cuba, noting that the normalization process initiated by the Obama administration was just a different way of seeking “the destruction of the revolution.”

Diaz-Canel also indicated his opposition to any political liberalization in Cuba. In his view, the development of any independent civil society is due to the flow of money from Cuban exiles and the U.S. government and the encouragement from European embassies, including those of Spain, Germany and the United Kingdom. Along these lines, he rejected the Trump administration’s demands to restore democracy and capitalism to Cuba in return for loosening economic sanctions and blasted Washington’s sanctions on Venezuela, the region’s other deeply troubled socialist experiment.

The major challenge for Diaz-Canel and the incoming generation of leadership is the Cuban economy is struggling. Although data is not published on a timely fashion and much is left to conjecture, it is likely that the economy has hit hard times—again. The development of tourism over past years has helped diversify the economic base away from sugar and other extractive exports, while the détente during the Obama administration led to a wave of U.S. tourists eager to see the island’s splendors. However, economic problems have been mounting. Cuba sustained damage from the 2017 hurricane season.

More significantly, Cuba has become dependent on aid from Venezuela. While oil prices were high that was a good thing. But since 2014 oil prices first plummeted and have only recently stabilized, but at roughly half the price. Consequently, Venezuela, under the amazingly inept economic mismanagement by its socialist leader Nicolas Maduro, has been forced to cut its assistance to Cuba. As Venezuela has fallen into the abyss of hyperinflation, a massive economic contraction and debt problems, it has become challenging for Caracas to finance another failed socialist experiment. This has rippled across the Caribbean to Cuba, where it is estimated that the economy will probably contract around 1.0 percent this year.

Cuba’s leadership has some difficult choices ahead. U.S. tourism is likely to fall as the Trump administration takes a tougher stance on Cuba, while prospects for higher aid levels from Venezuela are poor. At the same time, Cuba’s infrastructure is in bad need of an overhaul. That includes roads, ports and airports as well as telecommunications. This means there is a need for foreign investment, which many companies in the U.S. are interested in providing, but is not likely to occur due to the return of a cooler relationship between Washington and Havana.

Another economic problem facing Cuba’s up and coming leadership is that it needs to import a considerable amount of its food. Simply stated, the island’s inefficient generally state-owned agricultural sector is not up to the task of feeding the island’s population. According to the U.S. Department of Agriculture, Cuba imports about 60 percent to 80 percent of its food. The price tag for imports is thought to be around $2 billion a year, accounting for two-thirds of the country’s corn and a similar amount of rice, the latter largely from Vietnam and Brazil.

Although the Cuba government owns about 80 percent of the land the nation could use for food production, part of the land is fallow and the other part is not efficiently managed. Raul did allow some small-scale market reforms. Indeed, that helped launch a small movement of organic farming in Cuba, which resulted in greater food availability. However, the inability of Cuba to meet its population’s food needs remains an area of deep concern for the country as it faces the future.

Part of the problem facing Cuba is that political concerns trump economic concerns. The market reforms, which helped make more food available to people and added incentives for people to work, scared the political leadership. This became evident when President Obama made his trip to Cuba in 2016, a highly successful piece of U.S. diplomacy in which the much younger and energetic leader supported capitalism and entrepreneurs in sharp contrast to the ideologically rigid and old Castro brothers. Since the Obama trip, the government has applied the brakes to market reforms, with Raul seeking to stop “illegalities and other transgressions.”

In many regards Cuba’s leadership is facing the same challenge that dogged their fellow communists in China and Vietnam. In the Asian cases, central planning limitations, major production problems, distribution bottlenecks and corruption, pushed governments to introduce market reforms. Despite concerns over social unrest both the Chinese and Vietnamese communist parties remain very much in power and their economies have enjoyed considerable economic growth. China’s economy is now the second largest in the world and the Chinese Communist Party has several billionaires in its ranks.

The market-Leninist model, that is having a market-driven economy presided over by a single political party, has brought economic growth, higher standards of living, and stability to China and Vietnam—albeit with a hard-edged and at times repressive security apparatus. Yet, Diaz-Canel and his cohorts seem reluctant to making much change as they fear loss of control. They are no doubt aware of the wisdom of Alexis de Tocqueville’s view that “that the most dangerous moment for a bad government is generally that in which it sets about reform.” Certainly the case of Mikhail Gorbachev and the Soviet Union in the mid-1980s comes to mind.

Cuba is adrift on stranger tides. The old leadership is fading into history; the younger generation is seeking to grasp control. The world around Cuba has changed and the new Cuban leadership runs the risk of being unable to move away from past policies that do not equate with current realities, especially in the case of relying on a sinking Venezuela or hoping that Russia or China will come to their rescue. China is already feeling pressure from having lent Venezuela an estimated $60 billion over the past decade and is not likely to see a strong need to deepen its involvement in a Caribbean country dependent on aid from Caracas.

Russia may be willing to up its presence in Cuba. Indeed, there is talk about Moscow reopening a base on the Caribbean island, new deals on oil have been signed and Moscow appears to have offered help in dealing with hurricane damage. This comes to the backdrop of deteriorating U.S.-Cuban relations, partially caused by the mysterious outbreak of illness among American diplomats in Havana and a hardening U.S. approach to the island. While this may fit President Vladimir Putin’s geopolitical game of reviving the Soviet Union’s past global reach and taking a calculated poke at the United States, it is questionable that Russia wants to provide anywhere near the levels of aid that it used to give Cuba.

Diaz-Canel and those who will sit in his government at some point in 2018 have considerable challenges ahead. In many regards, they are caught up in a wave of economic pressures, which if not acted upon will lead to political problems. At the same time, embarking upon deeper economic reforms runs the risk of sparking other changes, some of which may threaten the Communist Party’s control over the country. Stranger tides indeed.

Image: A woman cleans the entrance of a building next to a Cuban flag hung up to dry after Hurricane Irma caused flooding and a blackout, in Havana, Cuba September 11, 2017. REUTERS/Alexandre Meneghini