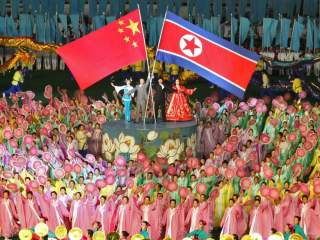 Just weeks after its fourth nuclear test, North Korea’s ballistic missile launch over the weekend—in defiance of UN Security Council resolutions—makes it abundantly clear that Pyongyang is racing to build a nuclear weapons arsenal deliverable to anywhere in the world, including the United States.

From the perspective of North Korea’s reclusive, brutal, but highly strategic leadership, nuclear weapons enhance their prestige, increase their ability to extort and influence neighboring states and make the cost of regime change too high for outside actors to contemplate.

But if that’s a good deal for North Korea’s leaders, it’s a bad deal for everyone else.

For the North Korean people—most of whom have been systematically abused, imprisoned, starved and stripped of their basic rights for seven decades—the diversion of scarce resources to the nuclear program is nothing short of criminal.

For South Korea, Japan and the United States, a nuclear armed North Korea massively increases regional instability and the potential for nuclear proliferation and poses a significant and long-term national security threat.

Given this alignment of negative consequences for pretty much everyone other than a small number of North Korean leaders, it’s unfortunate that China continues to undermine international efforts to reverse North Korea’s nuclear weapons program through its support for and protection of the North Korean regime. In addition to providing political cover in the UN, China provides Pyongyang with 90 percent of its energy imports and most of the food going to its military.

Despite its anger with North Korea, Beijing continues this policy because it sees North Korea not as an issue in itself but as a strategic asset in its broader relations with Washington. As unhappy as China’s leaders are with the nuclear tests, they have remained unwilling to take any action that could potentially undermine the stability of North Korea’s regime and bring U.S. troops to China’s border in case of collapse and Korean reunification.

That is why, despite China paying lip service to a UN resolution condemning North Korea’s nuclear tests, it resolutely opposes the imposition of new and tougher sanctions that might change Pyongyang’s behavior. This leaves the United States and the international community with essentially three options.

First, America can negotiate the toughest sanctions possible in the United Nations, even if neutered by Chinese opposition, and enhance them with much tougher American sanctions designed to make life harder for North Korea’s leaders. Although North Korea is the world’s most isolated state, it still requires outside resources including hard currency, technology and access to outside markets to survive. America’s highly effective unilateral banking sanctions on Iran showed that this type of vulnerability can be effectively targeted. The North Korea sanctions bill now moving through Congress, which not only sanctions North Korea but also businesses trading with it, will be an important step in this direction. This effort will raise the costs of reckless behavior, but without Chinese support probably will not alter Pyongyang’s strategic calculus.

The next option, therefore, is to see if and how Washington can influence Beijing’s strategic perception of North Korea in China’s overall security outlook. At present, China gets a free pass, paying no international price for its North Korea policy. America and our allies must seek to change this by making the status quo more costly for China than supporting meaningful pressure on North Korea would be. Enhancing America’s military presence in Asia, expanding naval exercises in Asian waters, helping South Korea and Japan build robust missile defense shields and supporting the normalization of Japan’s military posture are all logical responses to North Korea’s actions that China recognizes are not in its national interest. America must double down on all of them but also stress that China would be a major beneficiary of a reformed Korean peninsula where a high-tech corridor could connect southern Korea to northeast China, the threat of nuclear proliferation could be eliminated and China would not be blamed for complicity in North Korea’s industrial-scale human rights violations.

If, however, China continues to provide North Korea a lifeline and blunt the ability of sanctions to alter Pyongyang’s behavior, the third and least desirable option would be to contain North Korea in the classical Cold War style and further strengthen systems to prevent the proliferation of nuclear technologies to rogue states and terrorist groups around the world. A fully nuclear-armed North Korea is a terrible outcome but we would have to live with that if the other options fail.

The bottom line is that North Korea’s fast-advancing nuclear program is a regional and global threat, but one that can be eventually rolled back if the international community, including China, is willing to take strong steps now. If not, a new era of nuclear proliferation and regional instability is in the cards.

Jamie Metzl is a Senior Fellow of the Atlantic Council. He has served in the U.S. National Security Council, State Department and Senate Foreign Relations Committee. You can find his work at www.jamiemetzl.com.