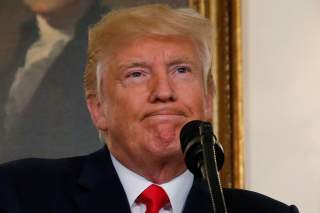 Donald Trump is paying the price for improvising his response to the neo-Nazi rally in Charlottesville last weekend.

On the day of the rally, he chose not to deliver remarks prepared by his staff; instead, he extemporized remarks about “hatred, bigotry and violence from many sides.” This seemed far too soft on the neo-Nazis, Klansmen and assorted other racist radicals, whose ranks included one violent young man who killed a woman by driving his car into a crowd of counterprotesters and bystanders. So the president spoke again on Monday, this time with a politically sensitive script. But on Tuesday, against the advice of staff, he decided to take questions from the press after delivering a statement about infrastructure. Inevitably, he was asked about Charlottesville, which led him to declare that there were “very fine people on both sides” of the protests.

The words sound reasonable, but there was no evidence last weekend of “very fine people” innocently protesting the removal of a monument in Charlottesville. Instead, there was a torchlit march on Friday that included Nazi salutes and chants of “Jews will not replace us!” On Saturday, a woman died and dozens were injured in the car attack and street brawls.

President Trump seemed to have watched a different event. His staff, not least the new chief of staff, Gen. John Kelly, were visibly appalled at the ire and inaccuracy of Trump’s exchange with the press on Wednesday. Leaks followed, reporting White House personnel thoroughly disgusted, but not quite disgusted enough to resign. Members of Trump’s business advisory councils, on the the other hand, did resign—in such numbers that Trump abolished the advisory bodies outright. The media, never this president’s friend, has seized on the debacle as vindication of every dark suspicion that Trump harbors far-right sympathies.

Trump is like a man accused of a serious crime who decides to act as his own attorney. He has no idea what the law says or what the procedures of the court are; he thinks that if he just explains everything, he’ll be acquitted. The president’s explanations have not all been off the mark—he was right that there was violence on “many sides.” So-called “antifa” protesters, who style themselves as antifascists but resemble fascist Blackshirts in their penchant for street violence, sprayed marchers with mace on the first day of the event. But the antifa did not kill anyone, and the white nationalists came to town ready and eager for violence. As the Washington Post’s Joe Heim reported:

A few minutes before 11 a.m. [Saturday], a swelling group of white nationalists carrying large shields and long wooden clubs approached the park on Market Street. About two dozen counterprotesters formed a line across the street, blocking their path. With a roar, the marchers charged through the line, swinging sticks, punching and spraying chemicals.

Counterprotesters fought back, also swinging sticks, punching and spraying chemicals. Others threw balloons filled with paint or ink at the white nationalists. Everywhere, it seemed violence was exploding. The police did not move to break up the fights.

One black man, DeAndre Harris, was beaten by a half-dozen white thugs in a parking garage adjacent to the city police station. No police came to his aid. The role of law enforcement in failing to prevent the bloodshed in Charlottesville is itself a scandal. The effect of police holding back and mismanaging the situation was politically significant: it ensured that a disgusting Nazi and Klan rally would become a bloody and polarizing moment in the national life. President Trump should have recognized this and chosen his words—or his staffers’ words—with the utmost care. But that is not Trump’s style.

The words he did choose included explicit denunciations of hate and racism: “the neo-Nazis and the white nationalists . . . should be condemned totally,” he said Wednesday. But as in so many other statements from this president, the right message was mixed up and mutilated amid so much else. He needs discipline, which General Kelly was expected to provide. This first crisis of Kelly’s tenure, however, suggests that nothing will change. Trump is giving moderate and, indeed, everyday conservative Republicans more and more reasons to agree with the media’s and Democrats’ judgment of him. He will never get a break from the press, but he does not need any sympathy from pundits: he simply needs to stop handing his critics ammunition.

Trump is reflexively anti-left. He won the White House last year by positioning himself as perhaps the most right-wing candidate—not ideologically conservative, but viscerally right-wing—since Richard Nixon. The Right, in this case, simply means being anti-left: ascribing all the country’s problems to radicals on Democrats’ side. Trump never wants to criticize the Right and give the radical Left a pass. But by failing to single out Nazis and Klansmen for criticism, he has only given a boost to the Left—and to the thuggish, cartoon-caricature right-wingers who made a bloody mess of Charlottesville. A defter president, a Nixon with the tongue of Reagan, would have anathematized the white nationalists from the right—after all, their hero Hitler destroyed his own country and left the heart of Europe in Stalin’s hands. The fascists idolized by the alt-right did more for communism than any Lenin could have dreamed. They were the greatest calamity of all for the West.

Only so much can be expected from political rhetoric, but Trump has many advisors who understand at least part of what must be said in response to a situation like Charlottesville. He just has to listen to them.

Image: Donald Trump pauses during a statement on the deadly protests in Charlottesville. Reuters/Jonathan Ernst