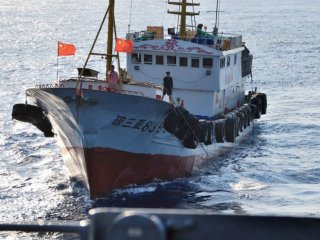 There’s a new Chinese charm offensive underway in Southeast Asia. Two years after their uncharming offensive to drill for oil in waters disputed with Vietnam, and with their massive proto-military artificial islands almost complete, Beijing’s officials are trying to spread love. They’re trekking around the world spinning a story in which China is the virtuous actor in the South China Sea, suggesting that the only reason for all the trouble there is Washington’s arm-twisting of its dupes in the Philippines, Vietnam and Malaysia.

From London to Jakarta, I've heard stories of Chinese officials seeking meetings with Southeast Asian diplomats to peddle this line. We've also seen a cack-handed attempt to bounce Brunei, Cambodia and Laos into apparently endorsing a joint statement supporting China’s position on the disputes. Unfortunately for Beijing, Cambodia and Laos immediately denied the story—and Brunei remained as silent as ever. Most recently, we’ve been treated to a very long article on the National Interest site by two of China’s most charming diplomats: Fu Ying, chairperson of the Foreign Affairs Committee of China’s National People’s Congress, and Wu Shicun, president of the National Institute of South China Sea Studies.

The article is fascinating because of the way it recasts China’s South China Sea narrative for an age in which many of its old myths have been destroyed by new historical research. The historical account it presents is much less bad than similar Chinese accounts used to be. In places it’s almost accurate. However episodes are recast and crucial facts omitted in order to make China appear the victim of imperialist perfidy. Its silky style and conciliatory tone is likely to win over many who don’t know the full facts.

This narrative is unlikely to convince many Americans, however, nor those Southeast Asian governments that have been on the receiving end of China’s rising “assertiveness” over the past seven years. To me, it reads like a narrative deliberately crafted to win over ASEAN states that aren’t claimants in the South China Sea, along with officials in other parts of the world who have little knowledge of the disputes. The purpose is to show that the ASEAN “claimants” have only themselves to blame, either because of their provocative actions or because they allowed themselves to be used by Washington.

There are many parts of the Fu-Wu narrative that an informed reader can dispute, but the hinge of the article is what happened in 2009. Fu and Wu are trying to rewrite the history of this crucial year to erase the memory of how China’s own actions caused its current difficulties. In the words of their article, “the general situation was under control before 2009.” The nub of the Fu-Wu story is that the new Obama administration, particularly its evil henchwoman Hillary Clinton, strong-armed the Philippines and Vietnam into taking provocative actions. They pin part of the blame on the “official deadline set by the UN Commission on the Limits of the Continental Shelf (CLCS)” for states to submit their maritime claims. However, they also argue that “an even greater factor [was] the introduction of the American Asia-Pacific rebalancing strategy.”

The authors then imply that the U.S. rebalance was the reason why the Philippines adopted its new maritime “Baselines Law” in March 2009, and why Malaysia and Vietnam submitted a joint claim to the UNCLCS in May. This is clearly nonsense. Both actions were triggered by the looming CLCS deadline, which had been set by the UN a decade before. The Philippines Baseline Law was the result of several years of discussion and internal argument. A regional diplomatic source tells me that Vietnam and Malaysia began discussing their joint claim in 2007—well before anyone in Washington had any plans for a “rebalance.”

The trigger for the Malaysia-Vietnam discussions was China’s rising assertiveness in 2007. Contra Fu and Wu, the general situation was not “under control” before 2009. China was already encroaching on areas of sea which Southeast Asian countries regarded as rightfully theirs. This directly involved Madame Fu. On May 18, 2007, shortly after she became China’s ambassador to the UK, she visited the headquarters of BP in London and told its executives that China could not guarantee the safety of either BP’s $4 billion investments in China or its staff if they kept working on Vietnamese projects in disputed waters off the coast of Vietnam. I had the chance to ask Madame Fu about this incident during a conference in Beijing in 2014. She told me that she did what she did because “I love BP and didn’t want to see it get hurt.”

BP was only one of several international oil companies that were heavily pressured by Chinese officials during 2007–08 to force them to abandon their activities in waters claimed by China off the coasts of Vietnam and Malaysia. This was the real trigger for the joint Malaysian-Vietnamese submission to the CLCS.

The Fu-Wu story can only argue that the incidents of 2009 were the result of U.S. pressure by bringing forward the date of the U.S. “pivot/rebalance” to Asia by two and a half years. Hillary Clinton became Secretary of State on January 21, 2009, but key figures of Obama’s Asia team didn’t join until later: Derek Mitchell became Principal Deputy Assistant Secretary of Defense, Asian and Pacific Security Affairs in late April 2009, and Kurt Campbell was confirmed as Assistant Secretary of State for East Asian and Pacific Affairs on June 26. The United States signed ASEAN’s Treaty of Amity and Cooperation on July 22, but the actual “pivot” announcement didn’t come until late 2011.

In fact, as I outline in Chapter 8 of my book, China’s actions were already worrying Southeast Asian governments well before the Obama administration took office. The proceedings of a conference held at Washington think tank CSIS in September 2008 make that clear. But there was one more crucial episode in 2009 that worried Southeast Asia even further—one that is always played down in Chinese accounts of the South China Sea disputes. On May 7, in response to the joint Malaysia-Vietnam submission, China sent a copy of its U-shaped line map to the CLCS.

This was the first time China had ever submitted that ambiguous claim in an international forum. Up until then, other countries could pretend it was simply an internal Chinese oddity. In fact, for many years it was illegal for foreigners to even take the map out of the country—it was regarded as a national secret. It was the submission of this document to the UN that, more than anything else, alarmed Southeast Asia and caused its governments to step up their lobbying to get Washington reengaged in the region.

I’m not sure that Fu and Wu realise that they’re peddling such a parody of reality. Having discussed South China Sea issues with both, they seem completely unable to understand the perspectives of the other claimants. They start from the position that everything China does is virtuous and correct and therefore that anyone who disagrees must be wrong. As one Southeast Asian diplomat told me recently, “China may not yet be a great power but it already seems to have acquired great-power autism.”

The risk, however, is that those who are not particularly well informed about China’s actions during 2007–09 could be taken in by the new narrative. It’s a version of events that is particularly unhelpful for anyone trying to untangle the South China Sea disputes. So far, the only government that seems to have bought into it is Gambia. But Beijing is clearly hoping others will follow.

Bill Hayton is an associate fellow at Chatham House and the author of The South China Sea: The Struggle for Power in Asia.

Image: A crewmember on a Chinese trawler uses a grapple hook in an apparent attempt to snag the towed acoustic array of USNS Impeccable​. Wikimedia Commons/U.S. Navy