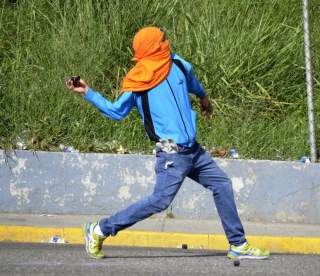 Nobody has lobbied Saudi Arabia to cut its oil output more intensely in recent weeks than Nicolás Maduro, Hugo Chavez’s successor as Venezuela’s dictator. Maduro already had major fiscal problems with the price of crude when it was at $107 per barrel back in June; it doesn’t take a brilliant mathematician to calculate the effect a 45 percent drop is having on the regime’s finances and popularity.

Maduro’s brand of Latin American populism rests on four legs: government control of the country’s vast oil resources; clientelism (the system by which Maduro maintains the “support” of the public by keeping them dependent on government handouts); a Cuban-designed police state and a geopolitical oil-exchange program in which Venezuelan oil is used to buy support from foreign governments in the region.

Underpinning the entire edifice is the ability to generate sufficient amounts of oil revenue. After all, Venezuela’s proven reserves, almost 300 billion barrels according to the “Oil and Gas Journal,” surpass even those of Saudi Arabia. But in order to generate these revenues, two conditions must be met. One is the ability to actually produce millions of barrels of crude per year; the other is the opportunity to sell the oil at a high price.

Venezuela has struggled to even meet the first condition in recent years due to the sheer incompetence of the socialist government. Despite the price of oil multiplying by a factor of twelve since Chávez rose to power in 1999, Venezuela has been producing a million barrels less per day than before Chavez’s ascent. That is why, a cumulative $1 trillion in oil revenue notwithstanding, the country has become an economic and fiscal basket case, throwing its social programs into crisis.

The the state-run food production and distribution network, as well as other parts of the Chavez-Maduro social “missions” program are in shambles. Throngs of desperate citizens now resort to looting to feed their families; protests are becoming increasingly common—and violent.

Maduro’s decision to ban the publication of photos depicting such scenes speaks volumes. The “missions” providing education, housing, public health and assistance for mothers with children under eighteen have seen their budgets reduced by 50 percent this year, according to Transparencia Venezuela, which monitors them closely. Some of the missions, such as “Hijos de Venezuela” (Children of Venezuela), “Alimentación” (Food) and “Cultura” (Community), will be spending between 80 and 90 percent less in 2015 than in 2014. Similar deep cuts have been made in other programs.

Scarcity, the collapse of law and order, near hyperinflation, mounting government deficits and a shrinking economy already were taking a heavy toll before oil prices plummeted. It is not surprising, given the increasing exasperation many Venezuelans feel and the repression the police state has unleashed, that just one fifth of the population, according to Datanálisis’ most recent poll, now approves of Maduro’s rule.

Venezuela can only sell roughly 50 percent of the oil it produces (roughly two and a half million barrels per day) in the international market, because the rest is already committed elsewhere. Approximately one third of the off-market oil goes to China to pay back Beijing´s loans; another 600,000 barrels are needed to satisfy domestic demand; some 100,000 barrels per day go to Cuba, while the rest is channeled to various other Latin American allies and satellites that Caracas subsidizes in exchange for political support.

One can only imagine Maduro’s face when Eulogio del Pino—president of PDVSA, the state-owned oil company—explained all this to his boss, who had probably just heard from his finance minister that Venezuela will have to pay back $11 billion in debt this year. With oil prices stubbornly sitting between $55 and $60 per barrel, the expected imbalance between the foreign exchange coming into the country and the foreign exchange going out will amount to some $45 billion, more than twice as much as last year.

No words can accurately describe what Venezuela’s poor are going through these days. In the last few years, as their condition has gone from the artificial bonanza of Chavez’s oil-fueled populism to a life of hunger, fear and hopelessness, they have tragically discovered what previous generations of Latin Americans have previously learned: that promises of a populist paradise are really a ticket to hell.

Maduro has a habit of seeing conspiracies against him everywhere and throwing opponents in jail under trumped-up charges that usually involve imaginary coups. But the greatest threat today is hydrocarbons, not democratic reformers.

Alvaro Vargas Llosa is a Senior Fellow at the Independent Institute, Oakland, Calif. His most recent book is Global Crossings: Immigration, Civilization and America.