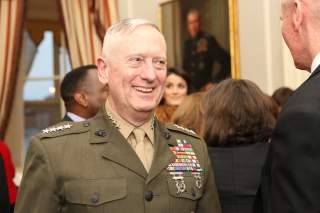 Donald Trump’s pick to head the Defense Department, retired Marine Gen. James Mattis, will sit before the Senate Armed Services Committee tomorrow for his first confirmation hearing. It will be an opportunity for Mattis to reaffirm critical defense priorities and renounce some of the failed policies pursued over the past eight years. Here are a few things lawmakers should look for from the next secretary of defense.

A realistic portrayal of the threats facing America: Failed foreign policies, like the “Russian reset,” “strategic patience” and “containment,” consistently undersold the very real threats posed by Russia, North Korea and ISIS. Judging from his past remarks, Mattis will bring a realist view to bear on the intent of Iran’s nuclear program and its destabilizing influence in the Middle East. His confirmation hearing is another opportunity to confirm that Mattis is walking in with both eyes open to the threats facing the United States.

A push for a strategy-driven defense budget: Chief among the challenges facing the military remains the looming threat of sequestration and budget caps. Without the assurance of a stable, predictable, requirements-based budget, the DOD cannot build a force of the future or even sustain the force of today. Public debate has too often focused on what the DOD can afford, as opposed to what is necessary. Providing for the national defense is not up to the government’s discretion. General Mattis should not accept the DOD budget as a hostage to ballooning entitlement spending, because we cannot afford to continue underfunding our national defense.

A clarification on past comments regarding the nuclear triad: In 2015, Mattis asked the Senate Armed Services Committee if it was “time to reduce the [nuclear] triad to a diad” by eliminating “land-based missiles.” Although asking these questions is not a bad thing, it is important to note that the land-based component of the nuclear triad has a distinct and important role to play in nuclear deterrence. According to a recent report from the Heritage Foundation, not only are intercontinental ballistic missiles (ICBMs) “the most responsive and least expensive” leg of the nuclear triad, but the dispersion of ICBMs across the United States would also “force adversaries with large nuclear weapons arsenals to exhaust their own nuclear forces to disarm the U.S., thus leaving the opponent vulnerable to a U.S. retaliatory strike.”

A narrower scope of defense “priorities”: Under the Obama administration, the military has been used as a vehicle for social and political experimentation. Mattis should focus his efforts on the most pressing threats and requirements for the DOD. The all-volunteer military is a profession of arms—not a testbed for green energy technologies, not a jumping-off point for commercial innovation and not the vanguard for gender-identity politics. The military was built for a specific purpose, and already has its hands full meeting core requirements. The military cannot afford detours for partisan politics, especially at a time when budgets are low and threats are high.

A commitment to upholding U.S. obligations to NATO allies: Although many NATO members have failed to meet required defense spending levels—and this should be remedied—no other multilateral organization has done more to promote democracy, peace, economic prosperity and security in Europe. In the face of increased Russian aggression, participation in NATO and commitment to U.S. treaty obligations will remain an important part of U.S. national security and foreign policy.

A willingness to take on tough issues like acquisition reform: By ensuring that limited funds are being used as effectively as possible, the DOD can make the most out of a constrained budget. The DOD will not find relief from its budgetary woes through cost savings alone, but improving defense efficiencies and reducing overhead can help strengthen the military’s “tooth-to-tail” ratio and direct more of its focus toward increasing combat power.

The military has the manpower and resources to do a great many things, but it is built and maintained for the singular purpose of defending our country. Anything that detracts from this purpose should be challenged by General Mattis, and by the Senate Armed Services Committee, throughout their questioning. The next secretary of defense must focus on the very real threats to national security, and ensuring that our armed forces have the requisite capability and capacity to protect us from them.