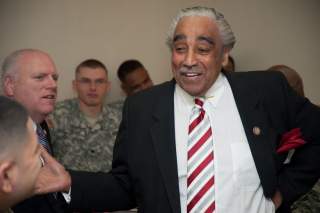 After decades of winning reelection by margins seldom seen outside of Third World dictatorships, the octogenarian New York congressman has recently found himself in difficult Democratic primaries. He clearly doesn’t like it.

“What the heck has he done besides saying that he’s a Dominican?” Rangel asked of State Sen. Adriano Espaillat, his main primary opponent, in a televised debate earlier this month.

“He’s been one of my main supporters in the Congress. He’s the one who put out that exciting label for me, the lion of Lenox Avenue,” he added. “What changed his mind are two things: the district lines which changed the populations of both sides and the fact that he wants to be the Jackie Robinson of the Dominicans in the Congress which is ambitious.”

Does it sound like Rangel was trying to “otherize” his opponent? Espaillat certainly thought so. “I’m really saddened that the congressman tries to frame this race among racial and ethnic silos,” he replied.

“What the hell can I say?” Rangel blustered after the debate. “He woke up in the morning and he saw that they said through the Census that there’s more Latins there than non-Latins. That is what I meant by it.”

Rangel, a founding member of the Congressional Black Caucus, argued that race and ethnicity are not good enough reasons to elect somebody to Congress. “What is it about my answer you don’t understand?” he asked.

A longtime Harlem political kingmaker, Rangel has been up for engaging in a little bit of race-baiting in the past. After Republicans took control of Congress in the 1990s, he complained that policies like capital-gains tax cuts were basically racial epithets: “It’s not ‘sp*c’ or ‘n*gger’ anymore. [Instead] they say ‘let’s cut taxes.’”

It was a dumb comment that may or may not have been based on an equally stupid comment from Lee Atwater, lovingly archived by The Nation as confirmation of everything its writers believe about conservatives. Rangel did at least mock Joe Biden for his “they’re going to put y’all back in chains” comments about the Republicans.

But racial politics are becoming more complicated. Rangel’s formerly majority-black congressional district has, through demographic changes and redistricting, has become majority Latino. In 2012, Rangel beat Espaillat by fewer than 1,100 votes. Will he be able to hold on this time?

In a strange twist of fate, it was a villa Rangel owned in the Dominican Republic that nearly undid his political career. Unpaid taxes on the property cost him his chairmanship of the powerful Ways and Means Committee and led to his censure by the House. President Obama tried to gently nudge him into retirement, to no avail.

A 2012 New York Times headline read, “Even When His Latino Roots Might Help Politically, Rangel Keeps Them Buried.” The congressman’s Puerto Rican father hit his African American mother and abandoned their family. Rangel, who has himself been married fifty years, once wrote, “My father was absolutely no good.” The personal can unfortunately be the political.

More important than any one lawmaker’s struggles connecting with new communities and constituents, are the changes gripping the country. American racial politics are often seen in black and white terms, both literally and figuratively. Consider the reaction to Ta-Nehisi Coates’ acclaimed Atlantic essay making the case for reparations (to which I responded here). With whites to lose their numerical majority and Hispanics outnumbering blacks, things are about to become more complicated.

Any conversations about race will now have to include more voices and the starting point will not always be the civil-rights fights of Rangel’s youth.

New York City Mayor Bill de Blasio—who has pointedly not made an endorsement in the late June primary—has essentially asked Rangel to cool it. De Blasio was elected by a very diverse multiracial coalition after six fairly fragmented mayor elections and he’d like to keep it together.

Rangel has long been a mainstay of such coalitions in New York politics, the man who toppled Adam Clayton Powell and acted as an important counterweight to Al Sharpton (who is aligned with a third candidate in the primary). If this is how his storied career ends, it will begin another chapter in race and American life not written in black and white.