Chicken Kiev: Why Is Zelensky Afraid Of Reform In Ukraine? 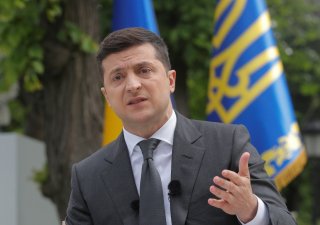 Ukrainians’ once bright dreams of reform are going up in smoke—literally. Early on the morning of July 23, one of the top anti-corruption activists in Ukraine, Vitaliy Shabunin, had his house burned down in what his watchdog organization, the Anti-Corruption Action Center, is calling an “assassination attempt.”

State investigators are treating the fire as potential arson, and Shabunin, speaking to the press in front of his destroyed ranch house in the suburbs of Kyiv, said that he believes it to be retaliation for his activism.

“As a Christian, I bless the perpetrators of (the attack) and those who ordered it,” wrote Shabunin on Twitter. “I thank them for the motivation to work even harder.”

Harassment and even violence aren’t new to the pugnacious thirty-five-year-old anti-corruption activist who has been assaulted with green sulfuric acid, had politically motivated charges leveled at him, and has been the subject of many smear campaigns. This time is different. This attack targeted his family. Shabunin, his wife, and children weren’t home at the time of the fire. His parents were. They escaped unscathed.

There have been other episodes targeting anti-corruption figures. Valeria Gontareva, the former central banker who took on Ukraine’s most notorious oligarch, had her house torched last September. The authorities promised they would solve the crime in a manner of weeks. The case remains unresolved. (Last fall, Gontareva was also the victim of a hit and run accident, which broke both of her legs, her daughter-in-law’s car in Kyiv was set alight, and her apartment in Kyiv was raided by unknown men in uniform.)

The attacks on Shabunin follow a series of dubious decisions that call into question President Volodymyr Zelensky’s reform credentials. After Zelensky sacked his reform-minded government in March, many of the fresh leaders brought in to root out corruption, deliver economic growth, and continue westward integration have found themselves not only without a post, but under investigation and the subject of harassment and even attacks.

As head of Ukraine’s tax agency, Serhiy Verlanov tried to target some of the worst graft in the country. On April 24, he was abruptly fired—two weeks later, state security officials searched his apartment and began investigating him for fraud and money laundering.

“We fought with all corrupt officials, of all types. Many did not like it,” Verlanov told the Kyiv Post.

In a devastating move for macroeconomic stability, the independent head of Ukraine’s central bank, Yakiv Smolii, was forced out last month after what he called a coordinated pressure campaign to keep him from threatening Ukrainian oligarch Ihor Kolomoisky. Smolii was then greeted with a coffin and funeral flowers in front of his house.

With reformers of all stripes in Ukraine under attack, the global investor confidence that Kyiv needs is being undermined. Ukraine has tried for years to attract foreign investment to jump-start its economy and more closely integrate with the West while, at the same time, distancing itself from Russia. But foreign companies have been wary of doing business in Ukraine. Ukraine recorded a net outflow of $1.5 billion in foreign investment in the first five months of this year, according to the State Statistics Service.

Zelensky rode into the presidency on the key promise that he would make Ukraine rich. The only way that will happen is by creating an environment where foreign companies bring jobs and investment, where young people can obtain loans, and where Ukrainians with novel entrepreneurial ideas can pursue them. Without the guarantee of equal protection under the law, none of that can happen.

Reform in Ukraine has appeared all but dead for months now. If Zelensky wants to preserve a smidgen of hope, he needs to act. The Anti-Corruption Action Center, founded by Shabunin and Daria Kaleniuk, is demanding that the investigation into this week’s attempted assassination be handled by independent and reliable authorities, instead of under the supervision of hotly criticized Interior Minister Arsen Avakov, who has overseen numerous police abuses and personally detests Shabunin. Zelensky also needs to guarantee the security of those fighting against corruption in Ukraine’s government. A good place to start would be providing Shabunin and his young family with a personal security detail for the remainder of the year.

Ukrainians took to Kyiv’s Maidan Square in 2014 to demand an end to pervasive corruption and lawlessness. When Russian President Vladimir Putin sent his unmarked soldiers to invade the country and start a war, Ukrainians fought back. The war continues, but Ukrainians must also fight the enemy within—which may be even more potent than Moscow’s adventurism. Unless Zelensky displays some gumption about battling corruption, Ukraine might find itself in the same position as Shabunin’s now charred house—battered, broken, and all but forgotten.