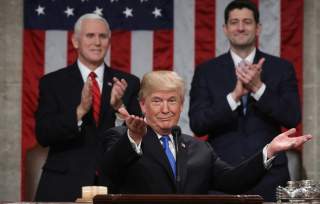 While media and political attention are focused on Russian “meddling” in the 2016 election, attention should be sharply focused instead on the role of China in electing Trump. It is that concern that should inform American action today.

These predatory policies have included most prominently currency manipulation, unfair trading practices and, most damaging of all, intellectual property theft. The combination of these policies have hit the American manufacturing worker the hardest. Unemployment, decades of declining incomes and loss of dignity are the prices many of these workers have paid.

The Democrats did little effectively to relieve the frustration of workers in America’s manufacturing industry with failed trade policies as they watched their jobs move offshore. Trump came along, recognized their plight and decided to do something about it. So they voted for him in traditionally “blue” states. His economic policies now aim to reverse the neglect of the Chinese threat to the U.S. economy and confront it directly before it is too late.

The Chinese have been manipulating their currency for decades, and America has lacked the leadership or political will to do much about it. Here is an explanation so America’s elected members of Congress might better understand why America had a $375 billion trade deficit with China in 2017. U.S. exports to China were $130 billion that year while imports exceeded $500 billion. The top two import categories were electronic equipment and machinery.

The Chinese export large quantities of manufactured goods to the United States each month given their cheap labor and favorable exchange rate (set by the Chinese central bank). After they sell these goods to U.S. companies and consumers, they deposit these proceeds in Chinese banks, which allows the Chinese central bank to reinvest in assets, mostly by purchasing U.S. Treasury bonds. China currently holds over $1 trillion of U.S. Treasury securities and is the largest non-U.S. holder. Japan is number two.

The irony of the tariffs recently placed on China is that the yuan has depreciated approximately 10 percent vs. the dollar since April, making the impact of a 10 percent tariff null and void. In fact, because the tariffs are delayed in implementation, the Chinese have benefited compared to American manufacturers since the announcements.

It should be recognized that the United States gave China a first-class ticket into the world trading system when our Congress voted, on a bipartisan basis, to admit China into the World Trade Organization. According to the 2017 U.S. Trade Representative Report to Congress:

“Today, almost two decades after it pledged to support the multilateral trading system of the WTO, the Chinese government pursues a wide array of continually evolving interventionist policies and practices aimed at limiting market access for imported goods and services and foreign manufacturers and services suppliers. At the same time, China offers substantial government guidance, resources and regulatory support to Chinese industries, including through initiatives designed to extract advanced technologies from foreign companies in sectors across the economy.”

China has embraced the rights its membership confers while defaulting on its responsibilities.

It is estimated in a recent report by U.S. Trade Representative Robert Lighthizer that U.S. companies have lost $50 billion annually in earnings caused by China’s intellectual property theft or forced technology transfers. According to a recent Bloomberg news piece entitled “What’s Intellectual Property and Does China Steal It?”:

China’s economy was seventh largest in the world twenty years ago, sandwiched between Italy and Brazil. Ten years later they were number three, almost even with Japan. Their economy grew almost fivefold during that time period. Today, the Chinese economy is second only to America, at over 60 percent of the size of the U.S. economy. From 1989 to 2018 the Chinese economy grew at an annual growth rate of 9.6 percent, far exceeding the U.S. rate of approximately 3 percent. Russia, on the other hand, is eleventh largest in the world in 2017 (nominal terms) and represents approximately 8 percent of U.S. GDP. If the U.S. economy is valued at a dollar, Russia’s is less than a dime. It’s China that is gunning for America, make no mistake.

The Chinese are silently challenging U.S. global economic supremacy and aggressively pursuing their nationalistic goals. Meanwhile, Americans debate the same topics continually and tweet and re-tweet their ideological partisan arguments about Russian “collusion,” a term most legal experts will tell you has little legal standing. Of course, Americans need to be vigilant with cyber attacks against U.S. elections whether from Russia or any other nation. Americans should assume that the interference in elections will continue and their vigilance must be at the highest level.

While Russian political meddling should be of concern, the real threat to America’s future is rampant Chinese predatory economic behavior. This, not the Russian threat, should be the U.S. rallying cry.

Jim Walker is a senior partner at Jadian Capital and is a member of the Fund’s Investment Advisory Committee. From 2008 through 2016, Jim was a managing partner at Fir Tree Partners, a top global hedge fund. Jim currently sits on the board of Starwood Real Estate Income Trust. He is also a board member of Team USA, the foundation for the U.S. Olympic Committee, Israel Policy Forum, a public policy group focused on the Middle East and numerous other non-profits. Jim received a B.S. in Economics from Boston College’s Carroll School of Management in 1984. He is a member of the Board of Regents of Boston College.

Image: U.S. President Donald Trump delivers his first State of the Union address to a joint session of Congress inside the House Chamber on Capitol Hill in Washington, U.S., January 30, 2018. REUTERS/Win McNamee/Pool