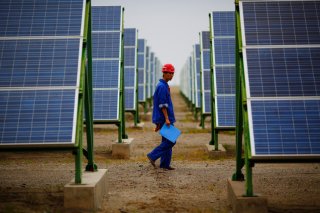 In recent years, the relationship between China and the United States has been characterized by rising geopolitical tensions over Taiwan, the South China Sea, human rights, and a host of trade disputes. Cooperation and coordination between the two countries may seem like a pipe dream. Yet there is one issue where the interests of both clearly overlap: climate change. A global temperature increase of 3°C will damage the economies and social fabric of both the United States and China—an outcome that both countries want to avoid.

At the twenty-sixth Conference of the Parties (COP 26), President Joe Biden was critical of China and President Xi Jinping for not assuming a leadership position on reducing carbon emissions. Indeed, Xi did not travel to Glasgow, Scotland, but then again, he has not left China in nearly two years. It is also true that China, in response to recent energy supply shortages, has increased both its coal production and consumption to keep its economy open and its people warm this winter. However, China’s progress toward decarbonization is impressive, particularly in its rate of renewable energy construction and electric vehicle adoption.

In October 2021, China’s State Council issued a road map with five principles and ten measures, including carbon emission targets for 2025, 2030, and 2060, and pledged to install 1,200 GW of wind and solar by 2030. If achieved, this renewable energy capacity would be greater than the total current electricity generating capacity in the United States. Almost every province in China has a working task force developing policies and programs to implement the State Council’s road map. But simply deploying renewables will not be sufficient. A host of other energy technologies will be required, and China is making early investments in multiple strategies, from energy storage and biofuels to energy efficiency and nuclear power.

However, as we explore in our recent book, Foundations for a Low-Carbon Energy System, China also faces major challenges in reaching its climate aspirations. China remains committed to managing its energy sector through a few large state companies, funded by a few large state banks, overseen by a few large state agencies. While it has supported a few market-based pilots in the electricity sector, these are very limited. Under Deng Xiaoping’s leadership, China became a market economy while retaining features of central planning. Energy is an exception. It is dominated by a few monopolistic state companies, which are more responsive to the political establishment in Beijing than the marketplace. It remains to be seen if this system can make the necessary reforms to meet China’s targets, or if China will have to restructure its electricity system.

Another challenge is the reliability of the electric grid. If China builds 1,200 GW of renewables, how will it maintain reliability when the wind is not blowing, and the sun is not shining? The country has limited natural gas supplies, and most of its hydroelectric generation is in the south. One option is to retrofit the existing fleet of coal plants to cycle down when renewable supplies are plentiful and then ramp up when they are scarce. This is at best a short-term option, as it is incompatible with complete decarbonization by 2060. Development of new technologies ranging from long-duration storage, carbon capture, and hydrogen are possible options, but they will require increased development before these technologies become commercial.

A third challenge relates to political pressure from Chinese workers. Existing fossil fuel industries represent millions of jobs in the Chinese economy, disproportionately located in just a few provinces. Decarbonization inevitably means substantial dislocations and migration, and China lacks government programs to deal with either. Historically, state-owned corporations have provided a social safety net, but these companies face declining revenues and rising costs, placing the burden squarely in the lap of the central government.

Because the Chinese economy is responsible for nearly 30 percent of global carbon dioxide emissions, the entire world has a stake in China meeting its climate commitments. Success will require critical reforms in how China manages its energy system, including better market signals in its electric grid. China has taken the first steps on a pathway to decarbonization, and—like the United States—energy technology alone will not overcome the political challenges in reaching carbon neutrality by 2060.

Henry Lee is Director of the Environment and Natural Resources Program at Harvard Kennedy School’s Belfer Center for Science and International Affairs. Dan Schrag is Co-Director of the Belfer Center’s Science, Technology, and Public Policy Program and Director of Harvard University Center for the Environment. Lee and Schrag are editors of the recently released book Foundations for a Low Carbon Energy System in China.