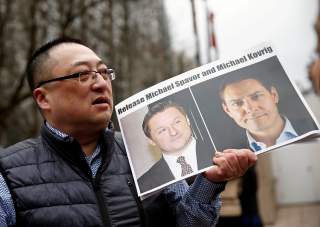 A T-shirt-clad young man came to my think tank in London five years ago to discuss North Korea. As an organizer of tours to the hermit kingdom from his base in Dandong, China, he was a “fixer” for basketball star Dennis Rodman’s visits to the country.  He told me about an occasion at leader Kim Jong-un’s beach villa where he found himself talking with Kim alone after Rodman had gotten bored and left the conversation to go play basketball. I asked if he had debriefed these stories and his impressions of Kim to the U.S. Central Intelligence Agency.  “No,” the young man replied. “Why not?” I asked. “I am Canadian,” he explained.

Today, my T-shirt clad friend, Michael Spavor, languishes in a Chinese jail. Why? Because he is Canadian.

Spavor was arrested on December 10, 2018, on allegations that he had endangered China’s security. Two days earlier, fellow Canadian Michael Kovrig was jailed on similar grounds. Kovrig is a Canadian diplomat on leave to work with the acclaimed International Crisis Group in Hong Kong. In May, the two were formally accused of stealing state secrets for a foreign organization, a charge that can bring the death penalty.

It seems obvious that the two Michaels were not jailed for committing crimes; instead, they are hostages. A few days earlier, Canadian authorities had detained Huawei Technologies Chief Financial Officer Meng Wanzhou at Vancouver Airport over an arrest warrant by the United States. She was charged with thirteen bank fraud, wire fraud and conspiracy charges in evading U.S. sanctions against Iran. China is clearly using Spavor and Kovrig as trade bait in an effort to persuade Canada not to extradite Meng to the United States.

In a discussion with Chinese researchers last month, I raised the Canadians’ cases as examples of the collateral damage that can arise from economic sanctions. Sanctions are Washington’s favorite policy tool, all the more so under President Donald Trump, who disdains diplomacy and is cautious about lethal use of military power. The fifteen hundred sanctions designations meted out in 2018 were half again as many as in any previous year.

Many of the new designations are “secondary sanctions,” designed to pressure third parties in foreign countries to stop their activities with the sanctioned country.  Such measures have succeeded in persuading well over one hundred foreign companies to halt trade with Iran. Iran’s oil sales are down to less than a sixth of their pre-2018 volume. As a result, the International Monetary Fund predicts the Iranian economy will shrink by 9.5 percent this year. While sanctions have not coerced the Iranian government into changing any of the policies that Washington deems malign, the harm to Iranian citizens is staggering and surely contributed to the wave of protests that swept the country last month.

China’s retaliation against Canada is also exacting a human cost. Spavor and Kovrig have been denied access to their loved ones or lawyers and are questioned daily in cells where the bright lights are constant. Their outside contacts are limited to monthly thirty-minute meetings with Canadian diplomats. By contrast, Meng is free on bail to live in her $13-million mansion in western Vancouver, to meet with family members and associates and to travel around the city wearing an ankle bracelet. So far, the Canadian courts have not ruled on Washington’s extradition request.

When I raised the Michaels’ case, two otherwise intelligent Chinese academics insisted that their jailing had nothing to do with the Meng case and that they must have been engaged in espionage.  As proof, they noted all the other Canadians in China who remain unfettered. I suppose the authorities have decided that two hostages are enough for now, but I know several Canadians who do not want to take a chance on being a third and are thus staying away from China.

China’s proclivity to detain foreign nationals on spurious grounds is well-practiced. Five years ago, two Canadian missionaries who had been in China for thirty years were arrested for similar hostage-taking reasons. In October, a visiting Japanese professor was arrested in Beijing on suspicion of violating an unspecified Chinese law. By most accounts, he was the fourteenth Japanese civilian to be arrested the past four years on suspicion of engaging in espionage. A prominent Chinese-Australian writer who advocated for democratic reforms in China was detained in January.

China is not alone in arbitrarily detaining foreign nationals. Russia, North Korea and Iran are among other authoritarian states that run roughshod over the rule of law in this manner. Iran’s December 7 swap of one of its foreign detainees, Princeton PhD student Xiyue Wang, in exchange for an Iranian stem-cell scientist the United States arrested in a sanctions case, will undoubtedly encourage Chinese authorities to expect that they can trade the Michaels for Meng. The cycle is then likely to repeat the next time a prominent Chinese citizen is arrested abroad.

Mark Fitzpatrick is an associate fellow at the International Institute for Strategic Studies.