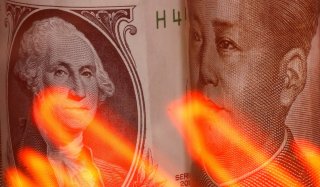 The five largest Chinese banks posted at least 10 percent profit declines for the first half of the year. These poor results, the result of increased provisions for bad loans, were the biggest profit drops in at least a decade. As a CNBC headline put it, “China’s Mega Banks Lost Billions of Dollars in Profit as Bad Loans Rise During Coronavirus Pandemic.”

These five Chinese institutions—the Big Four of Industrial and Commercial Bank of China, China Construction Bank, Agricultural Bank of China, and Bank of China plus the Bank of Communications—are struggling. The essential problem is that the Chinese economy—like the economies of almost all other countries—was flattened by efforts to control the coronavirus. Gross domestic product contracted 6.8% year-on-year in the first calendar quarter of this year, according to the official National Bureau of Statistics. In reality, it was down about twice that.

There was an uptick in the second quarter, officially reported at 3.2% growth. That figure overstates the recovery such as it was. The economy, in reality, looked like it continued to contract, albeit at a slower pace than in Q1.

This year, if the Chinese economy expands, it will not approach the official 2019 growth rate of 6.1 percent. Most analysts are forecasting 1 percent growth for China this year—the usually sunny IMF is forecasting 1.2 percent—although some see 2 percent. There are, however, doubts Beijing can manage to meet even the lower estimates.

The two main drivers of growth, exports and investment, are both unsustainable. First, exports are strong at the moment, but prospects are poor. Powered by sales of medical gear, they jumped 7.2 percent in July, well better than the expected 0.6 percent drop.

Why such a strong performance? “Chinese factories are getting bigger export subsidies than they were before COVID,” Jonathan Bass, CEO of PTM Images and a product-sourcing expert, tells The National Interest. They are also being helped by a weak renminbi, he said.

Many expect China’s exports to taper off in coming months, especially because the economies of China’s primary export markets—the United States and the European Union—have been hard hit by disease. The U.S. tumbled 31.7 percent in the second quarter of this year, compared with the previous quarter. The EU was down 11.9 percent.

Sales of medical gear are expected to decline, and Zhang Qingsong, president of Agricultural Bank of China, is particularly worried about the prospects for low-end manufacturing due to soft external demand.

Second, nobody likes the idea that Beijing has been relying on government spending to jumpstart the economy, something it has been doing for decades but especially since the 2008 downturn. Such spending risks catastrophe because of continual investment into underperforming assets and the consequent buildup of bad debts.

As early as 2007, then-Premier Wen Jiabao famously said the Chinese economy was “unstable, unbalanced, uncoordinated, and unsustainable.” Since then, Wen and successor Li Keqiang, the current premier, have tried to “rebalance.”

Their efforts have been unsuccessful. Even before the COVID-19 crisis, the country was running out of gas, incurring 6.7 times more debt than it was producing nominal gross domestic product. Now, that multiple appears to be higher because of Beijing’s accelerating spending plans.

The most recent rebalancing effort goes under the slogan of developing a “dual circulation” economy. In May, Chinese ruler Xi Jinping began talking about promoting “international circulation” and “internal circulation.”

At the moment, Beijing is talking up the prospects for consumer spending, touting the upcoming eight-day “Golden Week” holiday marking the country’s National Day and the traditional Mid-Autumn Festival, both of which fall on October 1 this year. “China Preparing for Travel Boom During October’s National Day,” is the headline in the official China Daily.

Although many will hit the road as central officials propagate the narrative that the country has beaten the coronavirus, there are still concerns for the travel industry. Zhang, the Agricultural Bank of China president, is worried about businesses the disease has especially affected: catering, accommodation, tourism, and entertainment.

“Consumption will not be the economic driver this year or next year for sure,” said Dan Wang of Hang Seng China to CNBC. “To increase consumption or its contribution to growth, China will have to do some major reform in its income distribution, and a big difficulty in doing that is the state-owned enterprise reform.”

Xi Jinping’s idea of “state-enterprise reform” is to allocate even more resources to these behemoth businesses, which will inevitably take money from ordinary citizens and therefore restrict consumer spending. As Xi talks about a “Marxist political economy” as the only correct path for China, it is doubtful he will adopt the steps to put more cash into the hands of the country’s consumers.

As everyone in Beijing leadership circles knows, the failure to move to a consumption-based economy risks a debt crisis and a debt crisis risks the banks.

The banks are in far worse shape than they let on. The China Banking and Insurance Regulatory Commission reported that at the end of June the average nonperforming loan ratio of all Chinese commercial banks was 1.94 percent. That was the highest rate since 2009.

Yet these banks have not had to classify many of their bad loans as such because of a government moratorium on payments of interest and repayments of principal. When the moratorium ends in March of next year, official nonperforming loan ratios will certainly soar when borrowers default.

Moratorium or no moratorium, nonperforming ratios are undoubtedly far higher than reported. Said Anne Stevenson-Yang of New York-based J Capital Research to this publication on the ratios, “The simplest thing to say is that Chinese accounting statements, like all Chinese statistics, are a target-driven exercise, not a summary of data.”

Compounding problems, Beijing continues to look to China’s biggest banking institutions as, well, piggy banks. Chinese officials told the banks to forego $219 billion in profits, by lowering interest payments and deferring repayments, this year. “The banks have been asked to .   .  .  perform ‘national service,’ ” said Jason Tan of CreditSights, to CNBC’s Squawk Box Asia. “They’ve been asked to support the economy at the expense of their own operational strength.”

“Asked” is polite. In China’s increasingly centralized economy, big state banks have no choice but to do what central government technocrats tell them to do.

So China’s “Mega Banks” are truly in mega trouble. And if the big banks are in trouble, so must be the Chinese economy. These days, the banks and the economy are one in the same.