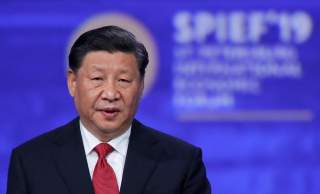 President Donald Trump’s “order” last month that U.S. companies should leave China signaled a risky new phase in the U.S.-China trade war. But CEOs should not lose sight of the fact that the biggest threat to their market access to the world’s largest middle class is not Donald Trump but Xi Jinping. Indeed, Beijing has been targeting foreign companies with a form of geoeconomic extortion that has caught Washington flat-footed.

China’s playbook is simple enough: demand that a major corporation “comply” with some Communist Party doctrine—such as sensitive territorial claims—or face boycotts, code violations or loss of access to Chinese consumers. If left unchecked, Beijing’s aggressive use of its “rules” threatens to turn Western firms into the Communist Party’s enforcers. With Hong Kong seized by protests, these efforts have now taken a sinister turn. Washington must set a red line to deter this corporate shakedown.

So far, China’s extortion has gone unpunished. Last year, Beijing challenged thirty-eight airlines, including United, Delta and American, to unify Hong Kong, Macau, Taiwan and Tibet under the same label as the People’s Republic of China. Their choice? Comply or face potential recourse from the China Cyberspace administration, which shut down Marriott’s Mainland website for one week earlier in January. Though the White House dismissed the campaign, Beijing’s strategy borrowed from the Treasury Department’s toolkit by weaponizing market access. China is poised to overtake America as the world’s largest air travel market in the early 2020s, thus making access essential for global carriers. Even if the firms disagreed with these policies, economic reality necessitated compliance, much in the same way that foreign firms have exited Iran to maintain access to American financial markets.

In the past, China’s neighbors have borne the brunt of an informal sanctions campaign typically exerted through regulators like the China Cyberspace Administration or the China Civil Aviation Authority. After installing the Terminal High Altitude Area Defense System, South Korea found its firms affected by consumer boycotts, code violations and other market access restrictions. By acting informally, China can avoid a potential WTO lawsuit over these actions, as it faced when it instituted rare earths export quotas during the Senkaku Islands dispute with Japan. Essential to such sanctions have been the efforts of nationalistic Internet users, dubbed “netizens,” whose concerns are echoed in state-owned networks and social media alike.

It’s a digital mob on demand, and it has gotten especially aggressive to counter protests in Hong Kong.

Cathay-Pacific has learned this the hard way. Some employees of the Hong Kong-based airline took part in pro-democracy protests in recent weeks. In response, Chinese state-owned firms began boycotting Cathay, and the Party explicitly threatened to restrict airspace unless the firm toed the line. Eventually, the company’s CEO was forced to step down. Similarly, Chinese netizens and their allies in the media trained their keyboards last week at the world’s four largest accounting firms, including New York-based Deloitte, after they failed to tangibly punish employees who allegedly crowdfunded a pro-demonstration advertisement.

Unlike the trade war, in which America can respond to Chinese measures with additional tariffs, it is difficult for Washington to respond symmetrically to such extortion. Chinese and American sanctions work by weaponizing fundamentally different elements of the global economic architecture. China’s key asset is the sheer size of its consumer market, while America’s key weapon has been the dollar’s international role in trade and finance. Similar to how the Chinese market is essential for many firms’ future growth, access to dollar financing is essential for participating in global value chains, issuing securities for international investors and hedging against future risks.

Though it is difficult to use sanctions to erode the attractiveness of the Chinese market, Washington should draw a red line at the targeting of individual employees. Absent clear proof of destructive or violent activity, employees should be free to exercise individual rights. Anti-boycott measures, including civil penalties for compliance, should be levied, alongside the credible threat of more powerful sanctions. The ultimate goal of these measures is to deter China from using its economic privileges to export its political system overseas. Though these techniques are being used in Hong Kong today, they could be used internationally, even in the United States itself, to suppress anti-China speech.

This challenge speaks to the evolving nature of sanctions in the era of great power competition. America is no longer confronted by rogue states and non-state actors but by markets deeply intertwined with its own. Unlike past efforts, financial and sectoral sanctions previously used against rogue states may risk large macroeconomic disruptions today. Limiting the exports of critical technology components to specific firms, like Huawei or ZTE, are one effective choice but could risk further retaliation or escalation in the future. Firms should act preemptively to hedge these risks by assessing key vulnerabilities in their supply chains. To assist them, Washington should explore building stockpiles of key inputs or providing financial support to businesses hit by Chinese sanctions. Generally, sanctions should only be deployed in pursuit of realistic goals and not as a stand-in for a strategy itself.

Michael B. Greenwald is a fellow at Harvard Kennedy School's Belfer Center for Science and International Affairs. He is also a senior adviser to Atlantic Council President and Chief Executive Officer Frederick Kempe and an adjunct professor at Boston University. From 2015-–2017, Greenwald served as the U.S. Treasury attaché to Qatar and Kuwait.