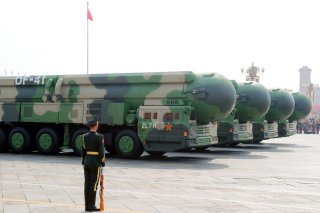 At an international security conference in Singapore on June 12, Japanese prime minister Fumio Kishida bemoaned China’s secrecy about its nuclear weapons buildup. His comments came only weeks after Secretary of State Antony Blinken publicly urged Beijing to work with Washington to promote nuclear nonproliferation. What’s odd is that neither mentioned the Nuclear Nonproliferation Treaty (NPT).  That’s a mistake.

Certainly, as China races to carry out the largest nuclear weapons build-up since the end of the Cold War, it’s time members of the Nuclear Nonproliferation Treaty (NPT) hold Beijing to its NPT obligations.  These include entering into good-faith talks like those with Russia that helped bring an earlier arms race to a close.

That’s what Article VI of the NPT legally binds China, the United States, Russia, the UK, and France to do. Yet, so far, China’s refusal to come to the table has attracted scarcely a word. One hopes that might change at the NPT Review Conference this August, because the pressure on China needs to be principled and consistent if the NPT is to have any chance of fulfilling its promise of effective measures toward nuclear arms control.

China’s build-up presents a serious challenge to strategic stability. For nuclear strategists in the United States and allied countries, the immediate question that China’s build-up raises is the pragmatic one of how best to maintain the credibility of our long-standing nuclear deterrent in a strategic environment that China seeks to dominate. For diplomats and other policymakers who address policy-relevant audiences at home and abroad, China’s build-up calls for reasoned arguments grounded in particular international legal obligations that China is trespassing. It is by the very race for dominance of the strategic environment that China avowedly pursues through its build-up that China most seriously trespasses the core international legal obligation of Article VI of the NPT.

In particular, the country must not seek to change the environment surrounding negotiations to such an extent as to pre-determine the outcome of the negotiations: it is a breach of good faith to pursue a fait accompli around a negotiation. The country also must refrain from conduct that aggravates the problem about which it has committed itself to pursue negotiations to solve. These constraints are duties that apply to every country that accepts a legal obligation to negotiate.

China, however, has preconditioned negotiations on its attainment of such nuclear weapons increases as would fundamentally change the geopolitical environment and put strategic stability at risk. China’s pursuit of a vastly enlarged and enhanced nuclear arsenal for that reason violates the Article VI NPT obligation to negotiate. China’s nuclear build-up is a violation, not because the NPT places limits as such on a nuclear-weapon state’s arsenal (it does not), but because China’s build-up, if pursued to the extremes that China aims for, would entirely change the future negotiating environment. China’s build-up in this way contrasts starkly with incremental increases and modernization efforts undertaken, for example by the United Kingdom, in order to maintain strategic stability. Steps that preserve the status quo comport with the obligation to negotiate. Steps to jettison the status quo do not. China’s build-up prejudices the outcome of any eventual nuclear negotiations, and it aggravates the strategic challenges that nuclear negotiations are intended to ameliorate. In these ways, China’s build-up ignores the constraints that form part of the legal commitment under Article VI to pursue negotiations.

China, with its nuclear build-up, seems to read from a playbook that it uses in other situations as well. The South China Sea is a salient example, where China, instead of negotiating in good faith, seeks to impose outcomes on other countries through unlawful island-building and groundlessly proclaiming Chinese “sovereignty” over the seas. Such conduct threatens stability and security at large. Strategists and policymakers should be concerned that China takes essentially the same approach with regard to nuclear weapons: it refuses to negotiate and seeks to transform the strategic environment so that China’s leverage will overwhelm any adversary before negotiations ever begin.

The United States and its allies long have relied on our nuclear arsenals to stabilize international relations, calibrating our weapons holdings to deter both nuclear war and conventional armed aggression. China, by contrast, seeks a new state of nuclear affairs, not to safeguard stability, but, instead, to give China license to pursue an increasingly forceful agenda against its immediate neighbors and farther afield. Attempting to overturn the geopolitical status quo, China builds its nuclear arsenal as a tool to advance that agenda.

A country under a legal obligation to negotiate in regard to nuclear weapons is not within its rights when it engages in a nuclear build-up calculated to reorder the world and dominate the negotiating table. As we address China’s nuclear build-up, we should recognize that the legal issues under the NPT and strategic concerns writ large are not separate: they are bound together in this way.

Thomas D. Grant served as Senior Advisor for Strategic Planning in the Bureau of International Security and Nonproliferation at the U.S. Department of State, 2019-2021. He is a Senior Fellow of the Lauterpacht Centre for International Law at the University of Cambridge. The opinions and characterizations in this piece are those of the author and do not necessarily represent those of the U.S. government.