China’s One Way Out of the Hong Kong Crisis 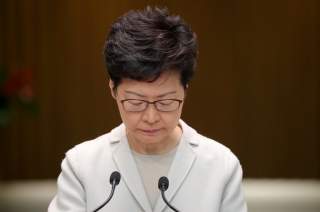 ALL MODERN revolutions apparently need to be named after something, regardless of whether they are successful or not. The overthrow of Slobodan Milošević in Yugoslavia in 2000 was called the Bulldozer Revolution. Georgia had the Rose Revolution in 2003 and Ukraine the Orange Revolution in 2004. The Arab Spring was composed of the Jasmine Revolution (Tunisia), the Pearl Revolution (Bahrain) and so on. Honoring this trend, the protests that have rocked Hong Kong this year have been dubbed the “Water Revolution.” The name supposedly derives from the demonstrators’ strategy to, in the words of Hong Kong-born kung-fu movie star Bruce Lee, “be formless, shapeless, like water.”

It is the word “revolution” though that has the leaders of the People’s Republic of China (PRC) gravely concerned, and it shows. Consider comments by the Global Times—a daily tabloid published under the Chinese Communist Party. According to this official publication, the protestors in Hong Kong are “traitors” aiming to “create a violent movement” that “seeks to challenge the central government [in Beijing] and make Hong Kong ‘independent.’” The protestors are said to be working with foreign interests (namely the United States), and aim to “[subvert] the government” and “[brainwash] Hong Kong society with extreme ‘Western values.’”

What exactly is going on in Hong Kong? Why have these protests so unnerved China’s leaders? And is there a way for the current crisis to end on a peaceful note?

FOR MANY Hongkongers, the 2019 Extradition Bill introduced in February was but the latest endeavor by Beijing to erode away the region’s autonomy. The proposed changes would have facilitated the extradition of criminal suspects from Hong Kong to other parts of the PRC and to Taiwan. While this would make sense for certain cases—the government referred to a case where a Hong Kong man murdered his girlfriend in Taiwan—observers noted that these changes could also mean that political dissidents could more easily be extradited back to the Chinese mainland.

These sorts of attempts to erode Hong Kong’s autonomy have been going on for a while but have been especially apparent over the past five years. What kicked things off was that, in 2014, the National People’s Congress in Beijing decided to impose a stringent screening mechanism on candidates for Hong Kong’s top official post, the chief executive. In effect, this mechanism bared candidates Beijing disapproves of. This ran contrary to the promise made in Article 68 of Hong Kong Basic Law—essentially the region’s constitution—that Hongkongers would one day be able to elect their own leaders. Then there was the 2015 disappearance of five booksellers affiliated with the Hong Kong-based publishing house that published books critical of senior PRC leaders. Then, in 2016, the Chinese e-commerce giant Alibaba acquired the region’s newspaper of record, the South China Morning Post, with a company executive stating an intent to “improve China’s image and offer an alternative to…the biased lens of Western news outlets.”

As evidenced by opinion polling, these incidents, along with many others, have had a dramatic effect on public opinion. The Hong Kong Public Opinion Research Institute (PORI), formerly the Public Opinion Programme at the University of Hong Kong, has recorded a perceived decline in Hong Kong’s various civil liberties since 2017, with ratings this year reaching their lowest points on record since 1997. Additional polling by PORI also reveals a perceived decline in the fairness of the region’s judicial system, the impartiality of the courts, and whether the region is governed by the rule of law.

These trends, conversely, correlate with changes in attitudes towards mainland China. PORI polling shows that support for Taiwanese and Tibetan independence has risen significantly (from 9.4 and 11 percent, respectively, in June of 2006, to 43.7 and 25.7 percent in July of this year) while confidence in the “One Country, Two Systems” model has crashed (76.9 percent in August of 2007 to 33.8 percent in August of this year). Likewise, confidence in Beijing has also collapsed (4.2 percent “very distrustful in August 2007 to 48.6 percent in August of this year). Separate polling by PORI (before becoming independent from the University of Hong Kong) and the Hong Kong Public Research Institute demonstrate that respondents, especially those between eighteen and twenty-nine years old, have been increasingly identifying as “Hongkonger” rather than “Chinese.”

The Extradition Bill, however, was a step too far for many. Not only did pro-democracy parties and activists object to it, but so did business leaders and even some pro-government figures, including Henry Tang, the former Chief Secretary of Hong Kong; Peter Lam, the chairman of Hong Kong’s Trade Development Council; and Priscilla Leung, Vice-Chairwoman of the Business and Professionals Alliance. Possibly the most damning rebuke though came from the chairman of the Hong Kong Bar Association (HKBA), who later wrote to the city’s chief executive, Carrie Lam, that

HKBA questioned, amongst other things, why the Government has in the current exercise reneged on the Government’s previous commitments to carry out a full consultation of the subject of rendition to Mainland China in view of serious concerns of the domestic population as well as the international community with regard to the lack of protection of minimum rights to a fair trial, in Mainland China.

This was what united the city’s various groups and political factions: the view that mainland China’s legal system cannot guarantee a fair trial. Passing the Extradition Bill would undermine the rights of all Hongkongers, as well as the strength of the region’s own common law legal system.

HONG KONG’S government ignored the cross-societal pushback against the Extradition Bill and advanced it forward to its second reading in mid-June. Protests against the bill grew from between five thousand to twelve thousand individuals in late March to as many as 1.03 million (according to organizers) on June 9. Lam, deaf to the concerns of the public and the city’s various political camps, insisted that “the bill will resume its Second Reading on June 12.” This resolve to proceed with the Extradition Bill despite obvious societal opposition has led some to speculate that the decision to push forward did not come from mainland China. After all, Beijing was focused on keeping the entire country calm and quiet as it prepared for the seventieth anniversary of the PRC’s founding. The decision to push forward with the bill must have come directly from Lam herself, who was hoping to ingratiate herself with Beijing.

Regardless of whether Beijing or Lam was responsible, her handling of the matter provoked much anger. When June 12 arrived, mass resistance made itself manifest outside of the Legislative Council (Hong Kong’s legislature) compound where the bill was supposed to be read. By the end of the day, a few protestors had broken into parts of the compound and clashed with police. The police responded against all protestors, not just the few who had broken into the compound, with tear gas, pepper spray and rubber bullets. This forceful, indiscriminate reaction on mostly peaceful demonstrators galvanized Hongkongers. The Hong Kong police commissioner made matters worse when he described the day’s incident as a “riot,” which under Hong Kong law carries a maximum penalty of ten years imprisonment and can be interpreted to include anyone who was present at a protest that becomes a riot—even if they did not partake in violent acts.

That was the turning point. At a press conference that evening, Lam gave “poorly directed comments” that came across as insensitive and condescending, further fueling the protests. On June 15, Lam attempted to calm the situation by suspending the Extradition Bill. Hongkongers, suspecting this was but a temporary tactical retreat, doubled down. The next day, as many as two million people marched against Hong Kong’s government, demanding that not only the bill be withdrawn entirely, but that there be an independent investigation into the police’s behavior on June 12.

The situation has continually escalated since then to the present day, to the point where police have begun using live rounds and some protestors have taken to resorting to violent methods. Though Lam had the Extradition Bill formally withdrawn on September 4, by then it was too little, too late. The protestor movement now has five concrete demands, with the withdrawal of the bill being only the first. The other four are an independent commission of inquiry into alleged police brutality; retracting the classification of protestors as rioters; amnesty for arrested protestors; and—most difficult of all—Carrie Lams’ resignation followed by the “implementation of universal suffrage for legislative council elections and for the election of the chief executive,” as was originally promised in Article 68 of Hong Kong Basic Law. In other words, for Hongkongers’ to be able to elect their own leader and legislators.

The protestors’ fifth demand for universal suffrage reflects their thinking: unless Hong Kong’s inhabitants can elect their own government which they themselves can hold accountable, there will be further future attempts to undermine Hong Kong’s autonomy, along with its distinct legal system and civil liberties. What began as a protest against the Extradition Bill, now dead in the water, has become a full-fledged movement fighting for Hong Kong’s autonomy.