China’s Real Challenge Is Not Military 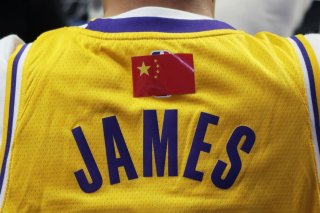 Vladimir Lenin is popularly believed to have said that “the capitalists will sell us the rope with which to hang them.” Whether he actually said it or not, the quote aptly fits the situation with China. Since 2016, Apple alone is reported to have invested $275 billion in China. All the world’s iPhones are Chinese-made. In addition to 10,000 direct employees, Apple’s extended supply chain for the manufacture of products engages more than 1 million Chinese workers.

But now China has gone from a favored investment destination to a dangerous rival. The rug has been pulled out from under the feet of Apple and all those Western investors that have built Chinese operations over decades. The private sector has learned that the long-term consequence of doing business with China produces not only profit, but intellectual property theft and rapidly increasing Chinese Communist Party (CCP) control over their businesses. It is estimated that the United States alone loses from $225 billion to $600 billion annually to Chinese intellectual property (IP) theft.

Investors in China are also in the middle of the growing sanctions crossfire between China and the West. American businesses must comply with U.S. human rights policy under the Uyghur Forced Labor Prevention Act. The CCP has counter-attacked by orchestrating social media campaigns calling for domestic boycotts against the products of U.S. firms obeying that law. Intel felt forced to apologize to Chinese consumers for publishing a letter on its global website calling for suppliers to refrain from sourcing in Xinjiang, home to Muslim minorities. Walmart, H&M, Nike, even the NBA, have faced similar pressures directed against their Chinese operations over compliance with U.S. human rights laws.

The most ominous emerging challenge for Western business is not, however, CCP inspired consumer boycotts, or even IP theft, but control over data. Former Deputy National Security Advisor Matt Pottinger and David Feith have noted that data is “the oil of the 20th century…the indispensable resource that will fuel artificial intelligence algorithms, economic strength and national power.” Through a series of laws, the CCP has asserted legal control over all data in China. Apple and other foreign firms must keep China-sourced data in centers located inside the country with transfer out forbidden. Worst of all, the Chinese government has reserved the legal right to force transfer of such data to state-controlled entities.

The long-term strategic implications are enormous. Data created and aggregated by Western investors in China can fall at any time under CCP ideological control. Data is essential for artificial intelligence to create new cutting-edge technologies. Unlike natural resources and population inside the borders of a nation-state, data is not readily protected by a conventional military. Data is inherently borderless and invisible, stored in Clouds and devices that can potentially be accessed and manipulated from any point in the world. Access to data is essential for democracies and markets to flourish through the free exchange of information. Chinese control of big data enables ideological dominance not only over technological innovation but ultimately over what people can read, think, and believe.

The emergence of the metaverse, a simulated digital environment—a centralized virtual world—accelerates the problem for democracies and markets. The ability to distinguish between what constitutes reality from an invented data metaverse will become increasingly complex and confused. A California marketing firm has already been able to digitally create a singer and style personality, Lil Miquela, who has managed to earn millions annually for its maker. Incredibly, even though not a real person, Miquela was listed by Time in 2018 as one of the world’s twenty-five most influential people on the internet along with Kanye West, Rihanna, and Donald Trump.

Armed with big data, China will have the potential to manipulate, distort and control what constitutes fact and reality anywhere on the internet, making Facebook’s early “fake news” websites and trolls look like primitive concoctions.

The challenge for the preservation of democratic values and freedoms is profound. The CCP could use an array of demagogic Lil Miquela’s to influence and manipulate public opinion on the internet, undermining democratic values and legitimacy. The ultimate test for the West will turn out to be information war—not conventional or even cyberwar. That kind of contest cannot be fought with fighter aircraft, combat ships, and infantry. Democracy could be compromised without a shot fired.

To protect free market values and governance, it will also not be enough for Western businesses to comply with whatever laws home countries may impose from time-to-time restricting business with China. Just as Black Rock’s Larry Fink is urging businesses to exercise greater “social responsibility” about such issues as climate change, ethnicity, and social justice, companies will have to exercise the same social responsibility about doing business with China. The Competitiveness Council of Business Executives for National Security (BENS) has called for Western businesses to take a series of measures including: greater awareness of risks for intellectual property if investing in China; accepting capital from only trusted sources to avoid risk to IP capital and technology; building resilient supply chains not dependent on China; prioritizing trade with partners outside China; and recognizing the risks to brand reputation by investing in an authoritarian society such as China’s.

The bottom line is that free-market enterprise must stop selling rope to the hangman before it is too late.

Joseph Votel, a retired United States Army General, is President and CEO of BENS, and the former Combatant Commander of CENTCOM and Special Operations Command.

Robert Spalding, a retired Air Force Brigadier General, a BENS member, is CEO of Sempre, a frequent writer on national security issues. He is the author of Stealth War: How China Took Over While America’s Elite Slept.