China’s RIMPAC Debut: What’s in It for America? 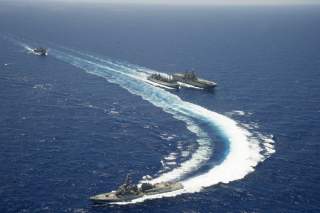 As tensions simmer in the East and South China Seas, clouds of doubt overhang China’s presence at Rim of the Pacific (RIMPAC) 2014. The world’s largest international maritime exercise, it is hosted biannually by the U.S. Navy. But despite concerns that Beijing’s participation constitutes a net loss for Washington, the U.S. can in fact derive substantial value from including China while building global maritime security partnerships. This “big tent” approach demonstrates willingness to weather regional turbulence to advance a longer-term push for Beijing to recalibrate its contributions to global maritime security to levels commensurate with its growing power.

After a 16-day transpacific voyage beginning on China’s eastern shores, a People’s Liberation Army Navy (PLAN) four-ship flotilla docked at Pearl Harbor on June 24,. Running from June 26-August 1, RIMPAC includes a collection of 49 surface vessels, six submarines, over 200 aircraft, and over 25,000 personnel from 22 countries. 1,100 Chinese personnel and four ships are participating, including missile destroyer Haikou, missile frigate Yueyang, supply ship Qiandaohu, and hospital ship Peace Ark, as well as two helicopters, a commando unit, a diving squad, and a medical team. Notably, China’s task force is the largest of any nation after America’s. It first rendezvoused in Guam with ships from the navies of Singapore, Brunei (another first-time participant) and the U.S., with whom it then sailed into Pearl Harbor.

For China, the manifold benefits of RIMPAC participation are plain. First, strong performances off Hawaii will burnish the PLAN’s domestic and international reputation as a dynamic, world-class navy. Second, as with Gulf of Aden anti-piracy, other than providing a rare window to showcase maritime prowess cooperatively, RIMPAC offers a useful platform for China to learn about the technologies, equipment, personnel, tactics, and procedures employed by the world’s leading navies. The U.S. Department of Defense (DoD) forecasts “China will probably build multiple aircraft carriers over the next 15 years” in addition to the 2012-commissioned Liaoning. As a result, surface vessels such as frigates and destroyers—indispensable components of any future carrier strike groups—desperately need blue water experience. That RIMPAC has traditionally involved deck aviation operations certainly adds an extra layer of enticement for China. Third, given the uncertain future of Somali anti-piracy operations, engaging in the U.S.-hosted exercise offers particularly useful pretext for deploying a variety of PLAN platforms, equipment, and servicemen outside of East Asia to accumulate experience and sharpen skills, many of which are applicable to missions closer to home. Finally, given the diplomatic damage wrought by Beijing’s increasingly assertive tactics in the East and South China Seas, RIMPAC is the PLAN’s latest “Far Seas foil” that exudes cooperation and progressiveness, temporarily offsetting destructive themes surrounding island and maritime disputes. While China certainly cares about its image abroad, it appears willing to pay image costs to uphold and further its self-described core national interests, including territorial claims. For cooperative international platforms such as RIMPAC, the lack of an “image-interest” tradeoff makes participation a no-brainer for China.

America’s desire for China’s RIMPAC participation appears more complex. “Sunk costs” surely factor in. China’s participation has been years in the making, the result of considerable sweat equity invested by American and Chinese officials. Washington’s formal invitation to Beijing was delivered by then-Secretary of Defense Leon Panetta in 2012. Navy Secretary Ray Mabus reiterated America’s welcome during his visit to Beijing in November 2012. Yet these gestures were the fruit of protracted efforts—eclipsed by strategic tensions on multiple occasions—to engage China more directly at sea.

More controversial is China’s participation amid maritime tensions across the Asia-Pacific. The PLAN’s arrival at Pearl Harbor has understandably been described as “awkward” amid escalatory Chinese behavior towards U.S. allies. Since 2012, China has employed a medley of unconventional “salami-slicing” tactics to incrementally assert its sovereignty in and over nearby and not-so-nearby waters, including the establishment of a Air Defense Identification Zone (ADIZ) over the East China Sea, as well as the deployment of oil rigs and scaling up of land reclamation “island-building” near and on the Spratly Islands. Outside the maritime domain, a spate of recent unprecedented cyber activities and espionage accusations has further soured the bilateral security relationship. Given this context, U.S. politicians and analysts alike contest the notion of rewarding China with RIMPAC initiation. The same critics charge the current administration with overvaluing the need to “reassure” China at the expense of American and allied interests.

Confusion over China’s presence at RIMPAC is further fueled by perceptions that the costs of China’s presence exceed any benefits for the U.S. For example, neither American nor Chinese observers hold the illusion that China’s inclusion will remove core tensions between Beijing, Washington, and any of the Asian capitals currently embroiled in East Asian maritime disputes. In this way, China’s participation in RIMPAC is similar to other recent instances of Sino-American maritime cooperation. Like anti-piracy coordination in the Gulf of Aden, it represents progressive cooperation amid persistent tensions. However, it is not expected to resolve underlying problems that perpetually frustrate bilateral security ties.

Others contest China’s attendance based on concerns that Beijing will engage in an “intelligence bonanza” to steal American and allied naval technologies and know-how. They argue that the U.S. should have considered suspending China’s invitation partly because of potentially “massive Chinese intelligence penetration” at the expense of Washington and its allies.

The above reservations have generated anxiety, skepticism, and in some cases utter opposition towards China’s presence at RIMPAC 2014. Why, especially now, would China be invited to participate in an event designed for the U.S. and its allies to improve naval interoperability? The rationale becomes more coherent when considering both immediate and long-term consequences.

First, aforementioned security concerns related to Chinese espionage are reasonable given China’s demonstrated willingness and ability to collect secrets both directly and remotely. But they should be tempered with knowledge that (1) China has previously observed RIMPAC (in 1998) and (2) its participation in 2014 is limited primarily to low-sensitivity activities. Most PLAN engagements at RIMPAC are not unprecedented within Sino-American maritime relations, and many are primarily nontraditional operations aimed at non-state actors or scenarios not necessarily related to fighting other navies. Of course, relevant U.S. personnel must take great pains to deny China access to sensitive and classified information, though China’s exclusion from many exercises such as carrier operations signals that America remains on guard.

Second, China has collected, and will continue to collect, all the information it can regardless of whether or not it receives formal RIMPAC invitations. Consider the following well-documented examples: (1) The PLAN was obviously not invited to monitor a U.S. Navy exercise off Japan in November 2007, but a Song-class submarine popped up near the USS Kitty Hawk carrier strike group anyway. (2) “Chinese maritime intelligence collection operations increased in 2012,” Commander of the U.S. Pacific Command Admiral Locklear testified to the Senate Armed Services Committee in April 2013, “with historic first such missions into the Indian Ocean and within the U.S. exclusive economic zones off of Guam and Hawaii.” These types of missions—which the U.S. utterly lacks the ability to “disinvite” China from conducting—are likely being executed by some combination of the PLAN’s most capable ships engaged in active intelligence collection, surveillance, and reconnaissance for military purposes. Specifically, the Type 815 Dongdiao-class, which specializes in military signals intelligence processing and analysis, is likely bringing its giant soccer ball-like radomes to bear. Beijixing (pennant number 851), based in the East Sea Fleet, which has been spotted frequently near Japan, may have led initial efforts given its considerable experience. The two other hulls are Qimingxing (852), based in the North Sea Fleet, and Tianwangxing (853), in the South Sea Fleet. If the PLAN can already enter Hawaii’s EEZ with high-capacity intelligence collection vessel(s) unencumbered, is it really crossing the information rubicon to invite non-intelligence-dedicated vessels to participate in limited, cooperative exercises there under strictly-monitored conditions?

Third, like China, the U.S. Navy reaps instant benefits from the PLAN’s presence. These include six hard-earned weeks of engagement with Chinese sailors as well as moderate insights into present Chinese naval strengths and weaknesses. The PLAN sent some of its most advanced surface platforms, nearly all of which have deployed for anti-piracy operations in the Gulf of Aden. The long duration and integrated nature of RIMPAC will expose Chinese naval personnel and equipment more than previous joint exercises have. This contact is essential if the U.S., Chinese and other navies plan to build on previous nontraditional maritime security cooperation such as Gulf of Aden anti-piracy and safeguarding destruction of Syrian chemical weapons.