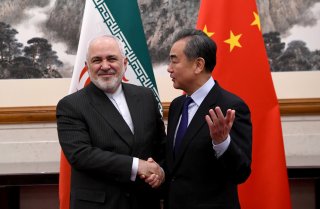 “Two ancient Asian cultures, two partners in the sectors of trade, economy, politics, culture and security with a similar outlook and many mutual bilateral and multilateral interests will consider one another strategic partners.” So begins a new secret bilateral agreement reportedly in its final stages between Chinese Communist Party leader Xi Jinping’s China and Supreme Leader Ayatollah Ali Khamenei’s Iran. On the assumption that this agreement is implemented, it should cause U.S., European, and Asian strategic planners great alarm. Ultimately, it will require the United States to develop a vision for how to organize its allies and partners to work together on a global strategy for dealing with China.

What are the first-order implications of this new agreement, in many ways an alliance between two of the world’s leading authoritarian systems that share and promote values that are entirely antithetical to the democratic world?

First, this is a new strategic challenge not just for the United States and its regional partners in the Gulf and Israel but for Asian and European democracies everywhere. It is the first major comprehensive bilateral agreement between China and another major country in a long time. It has been reported that the agreement has been in development for many months, but the geopolitical significance is that China gains a new and very significant foothold in one of the most geostrategic locations in the world, at the mouth of the Straits of Hormuz from where most of the world’s oil flows to keep the global economy humming. It also gives the Iranian regime and economy a major lifeline in the form of tens of billions of dollars of Chinese investment and trade, which will significantly weaken the U.S.-led sanctions against Iran. These are only two of the many reasons why this agreement should stimulate new consultations among the United States, its global democratic partners and allies, and its regional Gulf partners.

The second major implication is that China is intent on projecting its military power on a routine and sustained basis to the Middle East and to Europe. Thus, in essence, this is the beginning of the reset of the global military postures of the top two great-power competitors of our new era. While China will sustain its investments in and massive continuing improvements of its military capabilities and posture in the western Pacific, this new move into Southwest Asia is part of the continuing advance of China’s military posture, access, and operations into the areas of operation that the Defense Department calls U.S. Central Command and U.S. European Command. It portends much more significant Chinese military advances into those two theaters in the near term, something that most observers in the United States, Europe, and elsewhere greatly underappreciate.

In 2017, China established a major military base in the geostrategic location of Djibouti only a few miles from a U.S. base there. While that Chinese base ostensibly was built only for counter-piracy operations and other routine reasons according to the Chinese, all of China’s growing points of access and bases across southern Eurasia in the Indian Ocean (e.g., Sri Lanka and Pakistan), the Middle East, and into Europe in the Mediterranean will be used for classic great-power nationalist geopolitical and military purposes, including political influence and a wide range of military objectives such as Intelligence, Surveillance, and Reconnaissance (ISR); Command and Control (C2) of military forces in exercises, in shows of force to deter U.S., European, and Gulf military action, and, in the event of crisis and conflict, to target U.S., Gulf, and European forces.

This new Chinese political-military-economic foothold provides China with new points of leverage for coercion. China already wields vast economic, technological, military, and informational levers for coercion and has used them wantonly and as it sees fit to punish other countries who take actions that it doesn’t like (such as when South Korea deployed a single missile defense battery to counter North Korean ballistic missiles and China shut down Korean department stores in China and shut off Chinese tourism into South Korea).

One only needs to remember the several joint Chinese-Russian exercises in Europe including the Baltics in recent years, China’s joint incursions with Russian air forces into Korean airspace on July 23, 2019, as well as China’s continuing advances into the Arctic, to see where all of this is headed. The Chinese People’s Liberation Army increasingly will become a major security actor across the Middle East and Europe (with Russian support and coordination). Indeed, it appears increasingly obvious that a China-Russia-Iran axis is forming and could be a sustained strategic alignment. North American, European, Middle Eastern, and Asian policymakers would do well to get ahead of this curve and begin intensifying and integrating their consultations about China, with Russia and Iran as important but secondary factors. In addition, the United States will have to respond, over time, and view its military posture in the Middle East and Europe as at least in part driven by the changing and growing Chinese military posture.

In addition, it is quite likely that somewhere in this secret agreement, the two dictatorships also have included provisions for Chinese assistance with the Iranian ballistic missile program, space launch and related space capabilities, and cyberspace capabilities including advanced techniques for throttling the Internet in Iran.

Third, and perhaps most dangerously, its timing suggests that Xi Jinping sees the United States in its current viral, economic, racial, and electoral throes as completely distracted at the minimum and more likely, simply weak. Such a perception alone would be dangerous enough, as it means that the Chinese Communist Party leader is willing to take greater risks to continue China’s march toward achieving its stated goal of global domination and sees now as the time to act to displace the United States and erect a new global order that reflects Chinese Communist Party values. That global order, or what I call a “China First” global system, would set the conditions for the expansion worldwide of Chinese authoritarianism as a model, which includes suppression of freedom of speech, the elimination of privacy through technological means, the dictatorship of the party, internment and reeducation camps, the elimination of the rule of law, and much more. That is not a world that most of us will want to live in.

How should we in the democratic world respond to this new strategic context? There are at least four major endeavors upon which we need to act.

First and most broadly, the United States should undertake a global strategic review, with all of its allies and partners in the democratic world as well as those that play by the rules, to develop a more effective collective strategy for dealing with China in the post-coronavirus era. That integrated strategy should cut across regions and domains, including public health, governance, defense, and the economy, and seek not just recovery from the virus but a rejuvenation of the democratic world and a new, rules-based order which would leverage the inherent advantages of democracies over autocracies. That strategy also should seek deep cooperation with China in areas of agreed mutual interest, while also collecting democracies together to counter China in other areas where it is pursuing hostile activities.

Second, leading democratic powers from across Asia, Europe, and North America should start consulting more structurally and routinely—perhaps in the “D-10 Plus” format as soon as possible at the foreign and defense minister level. While the United States’ planned expansion of the G-7 meeting this fall would move in this direction, the D-10 Plus format should become more routinized.

Third, and consistent with the NATO Secretary General’s recently outlined vision of the future of the Alliance, NATO and its core Asian partners such as Japan, Australia, and Korea should strengthen their interrelationships. If in the future a major crisis or conflict between the United States and China occurred, then Japanese and Korean interests in the Middle East and Europe will be as much at risk as French and German interests in Asia and Europe. In addition, NATO also now needs to reinvigorate its linkages with key partners in the Gulf and the Middle East. The point is that these U.S.-led alliances and partnerships, borne in a different era, now need to be integrated across regions and domains to counter the China challenge.

Finally, as I have proposed before, with Chinese influence and military forces encroaching into and across the European continent, it’s well past time for the establishment of a NATO-China Council for the alliance and China to engage in a dialogue, avoid misunderstandings and accidents, and seek cooperation in areas of common interest.

The headlines about this new China-Iran agreement will suggest that it is important, but not geopolitical. Those headlines underestimate the significance of this new alliance—it is a milestone in history. It constitutes a major new element in our new era’s shifting geopolitical dynamics, setting the stage for a long-term confrontation between the democratic world and the authoritarians. We now need to wake up to this reality and, patiently and strategically, make the necessary arrangements in order to win the competition.