China and Russia: A Strategic Alliance in the Making 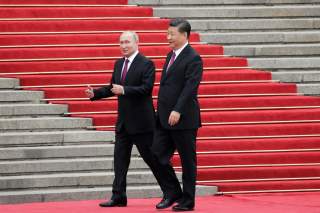 THE YEAR before he died in 2017, one of America’s leading twentieth-century strategic thinkers, Zbigniew Brzezinski, sounded an alarm. In analyzing threats to American security, “the most dangerous scenario,” he warned, would be “a grand coalition of China and Russia…united not by ideology but by complementary grievances.” This coalition “would be reminiscent in scale and scope of the challenge once posed by the Sino-Soviet bloc, though this time China would likely be the leader and Russia the follower.”

Few observers heard his admonition then. Even fewer today recognize how rapidly this grand alignment of the aggrieved has been moving from the realm of the hypothetical toward what could soon become a geostrategic fact. Defying the long-held convictions of Western analysts, and against huge structural differences, Beijing and Moscow are drawing closer together to meet what each sees as the “American threat.”

For two proud nations with long memories, their convergence also serves as a kind of cosmic revenge on the diplomatic maneuver Richard Nixon and Henry Kissinger orchestrated a half century ago.

When Nixon became president (in 1969), he and his National Security Advisor Kissinger sought to establish a relationship with Communist China to widen the divide between it and the Soviet Union, which they rightly regarded as the preeminent—indeed, existential—threat.

Even as they watched communists pursue “wars of national liberation” around the globe, Nixon and Kissinger embraced George F. Kennan’s strategic insight about containment: that nationalism would prove a sturdier pillar than communism. They also recognized that the crack in the Eastern Bloc between the Soviet Union and its junior Chinese partner could be widened by deft U.S. diplomacy at the expense of the Soviets.

We know how the story turned out—so it is difficult to appreciate how radical this thought was in 1969, though Nixon had noted a year earlier in an essay in Foreign Affairs, “There is no place on this small planet for a billion of its potentially most able people to live in angry isolation.” Had Nixon asked his government’s interagency process to consider the possibility of the United States establishing a relationship with Mao’s Communist China, this option would doubtless have been rejected as not just unrealistic, but unsound. So instead, in a cloak of invisibility worthy of Harry Potter, Nixon sent Kissinger to Beijing for a series of meetings so secret that even his secretaries of state and defense were unaware of them. Ultimately, this led to Nixon’s historic visit in 1972 to China, recognition of Beijing (rather than Taipei) as its capital, and the creation of an uneasy but selectively cooperative relationship that contributed to the ultimate defeat of the Evil Empire.

The Nixon-Kissinger gambit is now known as “playing the China card.” Today we should be asking: is Xi Jinping’s China “playing the Russia card?”

THAT THOUGHT seems to strike many Washington strategists as outlandish. Secretary of Defense James Mattis repeatedly emphasizes Moscow and Beijing’s “natural non-convergence of interest.” And the differences in national interests, values and culture are stark. As Russian strategists think about the longer run, they must view China’s rise with consternation. Today’s map draws a line between Russia and China that leaves a large swath of what was in earlier centuries Chinese on the Russian side of the divide. That border has repeatedly seen violent clashes, the last in 1969.

Given these structural realities, the prospects for a Chinese-Russian alliance in the longer run are undoubtedly grim. But political leaders live in the here and now. Denied opportunities in the West, what alternative do Russians have but to turn East? Moreover, while history deals the hands, human beings play the cards, even sometimes practicing a quaint art known in earlier eras as diplomacy. The confluence of China’s strategic foresight and exquisite diplomacy, on the one hand, and U.S. and Western European clumsiness, on the other, has produced an increasingly thick and consequential alignment between two geopolitical rivals, Russia and China.

In international relations, an elementary proposition states: “the enemy of my enemy is a friend.” The balance of power—military, economic, intelligence, diplomatic—between rivals is critical. To the extent that China persuades Russia to sit on its side of the see-saw, this adds to China’s heft, a nuclear superpower alongside an economic superpower.

American presidents since Bill Clinton have not only neglected the formation of this grievance coalition; unintentionally but undeniably, they have nurtured it. Russia emerged from the collapse of the Soviet Union in 1991 with a leader eager to “bury Communism,” as Boris Yeltsin put it, and join the West. The story of how we reached the depth of enmity today is a long one, strewn with mistakes by all parties. The Clinton administration’s decision in 1996 to expand NATO toward Russia’s borders, Kennan observed, was the “most fateful error of American policy in the entire post-cold-war era.” He predicted that the consequence would be a Russia that “would likely look elsewhere for guarantees of a secure and hopeful future for themselves.”

Vladimir Putin and Xi have watched the U.S.-led war in the Balkans (including the “accidental” bombing of China’s embassy in Belgrade in 1999), Western-supported “color revolutions” topple governments in Georgia and then Ukraine, and even Secretary of State Hillary Clinton encourage street protests in 2011 against Russia’s parliamentary elections. Putin would not have to suffer from paranoia to imagine that the United States was seeking to overthrow him.

As U.S. pressure on Russia grew with sanctions after Russia’s annexation of Crimea and a diplomatic effort to “isolate” Russia, China opened its arms. At every point the United States and Western Europeans imposed pain, China has offered comfort. Particularly when the United States has attempted to “diss” Putin personally, Xi has found ways to demonstrate profound respect. Consider what has actually happened in Sino-Russian relations along seven dimensions: threat perceptions, relationship between leaders, official designation of the other, military and intelligence cooperation, economic entanglement, diplomatic coordination and elites’ orientation.

WHEN RUSSIAN or Chinese national security leaders think about current threats, the specter they see is the United States of America. They believe the United States is not only challenging their interests in Eastern Europe or the South China Sea, but is actively seeking to undermine their authoritarian regimes. Indeed, Putin and Xi reportedly compare notes about the ways Washington is working to weaken each leader’s control within his own society and even topple him.

In contrast with Barack Obama’s disdain towards Putin and Donald Trump’s charge that China is “raping America,” Xi has persuaded Putin that they are “best buddies.” To which capital did Xi take his first trip after becoming president? Moscow. Which foreign leader gets to speak immediately after Xi at every international meeting China hosts? Putin. As Putin noted earlier this year, the only leader in the world with whom he had ever celebrated his birthday is Xi. In awarding Putin China’s “Medal of Friendship,” Xi called the Russian president his “best, most intimate friend.”

Official U.S. national security documents designate Russia and China America’s “strategic competitors,” “strategic adversaries” and even “enemies.” Increasingly, they are discussed in the same sentence, as if they were twins. According to the Trump National Security Strategy: “China and Russia challenge American power, influence, and interests, attempting to erode American security and prosperity.” Both are accused of conducting major “influence operations” against the United States and interfering in U.S. elections.

By contrast, Chinese and Russian national security documents call their relationship a “comprehensive strategic partnership.” According to Xi, this is “the world’s most important bilateral relationship, and is the best relationship between large countries.” China’s ambassador to Russia, Li Hui, says “China and Russia are together now like lips and teeth.” The words used by Russia’s Foreign Ministry are “comprehensive, equal, and trust-based partnership and strategic cooperation.” Even alpha male Putin has found an artful way to recognize publicly Russia’s junior role in this partnership, saying “the main struggle, which is now underway, is that for global leadership and we are not going to contest China on this.”

Most American experts discount Sino-Russian military cooperation. Commenting on this year’s unprecedented military exercise in which 3,000 Chinese soldiers joined 300,000 Russians in practicing scenarios for conflict with NATOin Eastern Europe, Secretary of Defense Mattis said: “I see little in the long term that aligns Russia and China.”

HE SHOULD look more carefully. What has emerged is what a former senior Russian national security official described to me as a “functional military alliance.” Russian and Chinese generals’ staffs now have candid, detailed discussions about the threat U.S. nuclear modernization and missile defenses pose to each of their strategic deterrents. For decades, in selling arms to China, Russia was careful to withhold its most advanced technologies. No longer. In recent years it has not only sold China its most advanced air defense systems, the S-400s, but has actively engaged with China in joint r&d on rockets engines—and UAVs. Joint military exercises by their navies in the Mediterranean Sea in 2015, the South China Sea in 2016 and the Baltic Sea in 2017 compare favorably with U.S.-Indian military exercises. As a Chinese colleague observed candidly, if the United States found itself in a conflict with China in the South China Sea, what should it expect Putin might do in the Baltics?