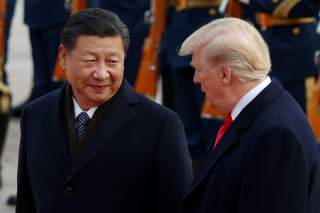 In November 1999, the United States and China signed a trade pact that paved the way to China’s entry into the World Trade Organization. To secure U.S. support for its WTO accession, China agreed to open its markets and cut tariffs an average of 23 percent.

Some twenty years later today, the United States and China are engaged in a raging trade war.

In 1999, there was notable euphoria on both sides about the possibility of a great future of bilateral cooperation.

Today, the euphoria is gone. President Donald Trump, the chief advocate of the trade war, has tweeted that “China has taken so advantage of the U.S. for so many years,” and that China has been “stealing from American businesses, hurting [its] workers, and @realDonaldTrump is right to fight back!”

The year 1999 was a different era in China—culturally, socially and politically. China watchers have noted that the atmosphere was more open, and more politically tolerant. Under then President Jiang Zemin, there was a certain degree of political space for intellectuals and activists. In the intervening years, that space was curtailed by Jiang’s successor Hu Jintao, and then curtailed even further by current Chinese president Xi Jinping.

In Washington today, policymakers on both sides of the aisle—along with pundits who wish to sound smart on China—have been expressing their disappointment that China has not evolved to become more politically liberal as it has amassed economic might.

Of course, China never said it was going to democratize, and the Chinese Communist Party never promised to relinquish political power.

Regardless, one example illustrates the glaring contrast between China in 1999 and today.

The year 1999 opened with a powerful essay by one of China’s finest contemporary writers.

Penned by a twenty-seven-year-old journalist named Shen Hao, the editorial served as a New Year’s greeting from the Southern Weekend, an edgy Guangzhou-based newspaper, to its readers.

The author pledged to seek truth and justice, and the essay reflected a young man’s ideals for his country. It read in part:

The sunlight hits your face; warmth remains in our hearts. There is always a strength that comes quietly from your fingertips; always a concern that emanates softly from your eyes. At this moment, we have no words except well wishes: May those without strength gain strength; may the pessimistic move on; may those moving forward continue to move forward; may the fortunate become even more fortunate. And we—we will continue to cheer you on.

The sunlight hits your face; warmth remains in our hearts. We love this country and her people . . .

The editorial has been widely read, but twenty years later, Shen is living a life as a convicted criminal. In 2014, he was arrested for extortion, embezzlement, and other crimes. By then, he was no longer just an idealistic journalist. He was the head of a Guangzhou-based media empire that owned one of China’s most influential business publications.

Perhaps Shen had offended too many powerful people while overseeing his media empire’s reporting. Perhaps Shen was caught up at a time when Xi went after his political enemies, including corrupt officials via the anti-corruption drive or media sources that deviated too much from the government line. Perhaps Shen was in fact guilty of all charges.

He was sentenced and jailed until October 2018.

Around the time of Shen’s release, the big news item in the city where Shen built his career was the grand opening of a high-speed rail link with Hong Kong.

In the twenty years since Shen’s famous editorial, China had become the second largest economy in the world. The new rail link was yet another sign of the country’s economic progress and infrastructure prowess.

During China’s major national holidays, such as the recent May Day celebration (where Chinese citizens got four days off), the rail stations in both Hong Kong and Guangzhou are jam-packed, with multiple trains sold out on the day of travel.

In 1999, May Day was just another holiday in China. In 2019, Chinese crowds packed into Hong Kong and cities across China and neighboring countries in Asia. Their sheer size reflected the Chinese emerging middle class’s market-bending power.

What happened to the author of “The sunlight hits your face; warmth remains in our hearts”? The Western press, which eagerly reported his detention, did not pay attention to his release.

The U.S.-China trade war rages on, even as the leader of the United States claims, rather incongruously, that his friendship with the president of China is “unlimited.”

To Trump, trade is about trade, not democracy. Talking heads might do well not to read too much into the U.S.-China trade war for that reason.

Even then, it does not hurt to be reminded that before high speed rail hit Chinese cities, before Sino-American trade relations soured, a talented young man expressed his most fervent hopes for a better life for his fellow citizens, and that essay is as powerful today as it was in 1999.

Ying Ma is the author of Chinese Girl in the Ghetto, which was released in audiobook in 2018. During the 2016 election, she served as the deputy director of the Committee for American Sovereignty, a pro-Trump super PAC, and the deputy policy director and deputy communications director of the Ben Carson presidential campaign. Follow her on Twitter @GZtoGhetto.