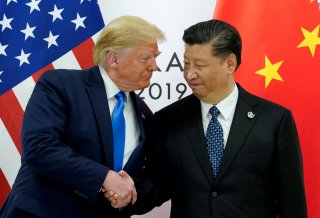 Despite—or because of?—his daily press conferences, President Donald Trump’s popularity ratings have been steadily sinking. A Gallup poll has his approval at 43 percent and his disapproval rating at 54 percent. As former Vice-President Joe Biden remains immured in his Delaware basement, what can Trump do to bolster his standing?

One faction in his administration has apparently concluded that he should focus on tearing down Biden over his stands on China rather than tout his own accomplishments. Instead of presenting himself as a wartime president, as he has previously indicated, the Washington Post reports that the White House is leaning towards a strategy of focusing on Biden’s past statements on China and his son Hunter Biden’s ties to its companies. Their B & B strategy—Biden and Beijing—is supposed to put Trump over the top in November.

In contrast, White House senior adviser Kellyanne Conway and Republican National Committee chairwoman Ronna McDaniel believe that the focus of the campaign should be on Trump’s ability to create an American economic comeback. Conway explains, “Any campaign ads should show the commander in chief, the wartime president, signing $2 trillion in relief for Americans, deploying the USNS Comfort, working with Democratic governors and G-7 leaders, standing from the podium flanked by Drs. Fauci and Birx, mobilizing the private sector.”

She’s right. Trump has a road to victory. But pummeling China and Biden is not it.

Trump will have plenty of opportunities to attack Biden. But there are numerous problems with simply targeting Biden over China. For one thing, what he’s released already has been less than devastating, which should hardly come as a surprise. The advertisement released a week ago showing Biden with former Washington Gov. Gary Locke immediately became mired in controversy over alleged racism. New ads in the offing are said to lack punch.

The most basic problem is that Trump himself is vulnerable on this front. Trump may be blasting #BeijingBiden but he has his own track record. On February 23, for example, he declared that Chinese president Xi Jinping was working “very hard. I think he’s doing a very good job.” As late as March 27, he tweeted that “China has been through much & has developed a strong understanding of the Virus. We are working closely together. Much respect!” He also praised China for its “transparency” on the coronavirus. The Biden campaign has been pouring millions into ads about Trump’s statements.

Trump said these things because he knows that trade with China matters, not least to the farmers who make up his rural base. He can’t willy-nilly tear up the relationship with China. His message on China is being deemed inconsistent because he noted at his press conference on Tuesday, “Well, I did a trade deal with China, where China is supposed to be spending $250 billion in our country.” He added, “I’d love to have a good relationship with China.”

Indeed he should. As Robert Zoellick has previously observed in the National Interest, a confrontational strategy with China should not be an end in itself. It could have wholly unpredictable consequences. Zoellick noted,

“The United States needs to enhance its influence through long-term partnerships with allies and partners. America needs to save, update, and even expand the international trading system of openness, rules, and fair settlements of disputes. Americans need to represent our country abroad as purveyors of principles, as well as commerce, treating people from other lands with dignity and respect. And the United States needs to cooperate with China to mutual benefit while managing differences.

Cooperation as stakeholders does not mean the absence of differences. Stakeholders compete, too. The management of their differences should take place within a larger framework that offers common benefits.”

Instead of seeking foreign scapegoats, Trump should focus on reviving the American economy. He should be touting the new $400 billion deal on emergency funding for small businesses that Congress is expected to pass this week. Trump may regard him warily, but Treasury Secretary Steve Mnuchin has become his strongest asset as he deals with Congress. Trump should build him up publicly, loath as he may be to share any of the credit for an economic rebound. But in backing Mnuchin, he can buttress his claim to hire top-flight talent, something that has been an equivocal matter in his administration, to say the least.

In addition, Trump should be pushing for more coronavirus testing by the federal government in tandem with the states. It’s a big mistake for him to cede this issue. The governors, Republican and Democrat, are increasingly jousting with Trump over the responsibility for ramping up testing. Until widespread testing and contact tracing takes place, Americans will not feel comfortable about mingling in public, no matter how many public openings Trump declares.

As he gears up for the election, Trump would do well to recognize that, to a large extent, Biden doesn’t need to do or say much. His time in the basement where he can’t commit many verbal blunders is almost ideal for him. Trump will be based on his own performance, not anything he says about Biden’s record or promises.

Right now, 22 million Americans are unemployed. No coronavirus vaccine exists. The pandemic is spreading into rural areas. It’s time for Trump to demonstrate the art of the deal and revive the economy—or watch himself go down in history as the GOP’s new Herbert Hoover.