China Can Thank Nazi Germany for Its Carrier-Killer Missiles 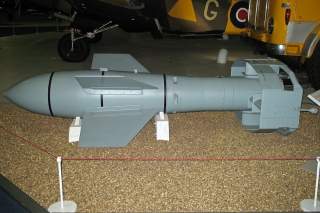 If China ever sinks an American aircraft carrier, it can thank Nazis Germany.

The genesis of China's growing arsenal of anti-ship missiles began almost 72 years ago. On September 8, 1943, the Italian battleship Roma was peacefully steaming under sunny Mediterranean skies. Mussolini had been deposed, Italy had secretly surrendered to the Allies (despite promising Hitler it would fight by his side to the end) and the Italian Navy was sailing toward internment in Allied ports.

Nazi vengeance came in the form of a squadron of German Dornier 217 bombers. After three years of seeing their ships sunk by the British, being bombed was a familiar experience for Italian sailors. But these bombs were different. Instead of falling straight down like a normal bomb, they followed their target. One bomb penetrated the Roma's hull and exited the other side. A second landed on the deck and detonated the forward magazine. The battleship sank, killing 1,253 members of her crew.

The Missile Age had arrived.

The weapon that sank the Roma was the Fritz-X, a regular 3,000-pound armor-piercing bomb with radio-controlled fins attached. The bomb glided toward its target under the guide of an operator on the launch bomber, who tracked the bomb by flares burning on its tail.

By today's standards, it sounds like a primitive predecessor of the modern U.S. Joint Direct Attack Munition, which uses GPS to turn regular bombs into smart weapons. Yet by the standards of 1943, it was pure science-fiction, a guided weapon as exotic and terrifying as a Predator drone to a Taliban tribesman.

And that wasn't the most deadly product of Nazi labs. The Fritz-X was just an unpowered glide bomb. The Hs 293 was a real guided missile, a 12-foot-long radio-controlled weapon that resembled a miniature airplane with a rocket engine strapped to it. Roaring in at a speed of 530 miles per hour, the Hs 293's 2,300-pound high-explosive warhead could devastate unarmored targets like destroyers and transports.

Just what that meant became evident when the Allies clawed their first toehold on the continent of Europe. On September 9, 1943—the same day that the Roma was sunk—American and British troops landed at Salerno, south of Naples. The invaders were nearly thrown into the sea by a panzer counterattack that was only halted by Allied naval gunfire. But in turn, the Allied warships were also pummeled by more than 100 Fritz-X and Hs 293s that nearly sank the British battleship Warspite and the U.S. light cruiser Savannah. Nearly a dozen ships were sunk or damaged.

Losing warships was bad enough. But the real threat of the German smart bombs was far greater. By the end of 1943, the Anglo-American-Canadian navies were finally putting down the U-boat threat, which meant the convoys carrying men and supplies for the invasion of Europe could proceed. But now the Germans had a weapon that could strike from beyond the range of shipboard anti-aircraft guns. In an era when hitting ships with iron bombs was more art than science, here was a scientific weapon that could massacre slow-moving transports and amphibious assault ships.

This wasn't a total surprise. Allied intelligence had picked up enough clues by August 1943 to fit a British sloop with radio receivers to detect the German missile guidance frequencies (naturally, one of the first ships that was sunk was the snoop sloop). But then what? Ships were told to lay down smokescreens and take evasive action, a technique hardly practicable for anchored ships unloading supplies at a beachhead. Desperate for any defense, Allied sailors spread the rumor that turning on their electric razors would jam the missile's radio frequencies.

Back in the U.S. and Britain, research labs worked frantically to develop radio jammers. But electronic warfare was still too young to offer much hope. For example, the first American jammers required the operator to manually locate the correct radio frequency, tune in the jammer, and do it all in 10 to 20 seconds before the missile hit.

What did save the day was a counter-missile campaign that somewhat resembled the forensics behind the modern counter-IED campaigns in Afghanistan and Iraq. Detailed in author Martin Bollinger's "Wizards and Warriors: The Development and Defeat of Radio Controlled Glide Bombs of the Third Reich", the effort was extensive and relentless. Special recovery teams sifted through missile fragments and unexploded bombs, as well as launch aircraft on captured airfields. German aircrews were interrogated for knowledge of the anti-ship weapons.

Despite a promising beginning in the Mediterranean, the German smart bomb campaign faltered by the time of the Normandy invasion in June 1944. The most basic reason was that for all their technological prowess, Germany lost control of the skies. By 1944, the battered Luftwaffe fighter arm was busy defending Germany from the Allied strategic bomber offensive. Without proper fighter escort, the bombers couldn't penetrate Allied day and night fighter screens. With the Nazis focused on producing fighters instead of bombers, Germany could not maintain more than six missile-equipped squadrons at a time.

Bollinger estimates that just 17 to 24 ships were sunk and 14 to 21 damaged. "At most, only 1 weapon in 24 dispatched from a German airfield scored a hit or damage-causing near miss," he writes. "Only about 1 in 14 of the missiles launched achieved similar success, and at most 1 in 9 of those known to respond to operator guidance was able to hit the target or cause significant damage via a near-miss. This is very different from the 50 percent hit rate experienced during operational testing."

Do Nazi smart bombs have implications for a U.S.-China conflict? Today's advanced warships are protected by batteries of missiles as well as an array of jammers and decoys. Shipboard radars have also improved, while the F-18 fighters of a modern U.S. carrier can engage targets well beyond the range of a 1940s combat air patrol.

On the other hand, ship-killing missiles have come a long way since the Fritz-X. China has developed ship-killing ballistic missiles that are essentially satellite-guided versions of the German V-2 (which the Allies could not shoot down). Instead of the subsonic Hs 293, China can field supersonic cruise missiles that will strain American defenses.

One significant lesson of the Nazi ship-killers is that what turned the tide wasn't jammers or evasive action. It was simply the Luftwaffe losing control of the air. The Germans could launch no smart bombs if the launch bombers were shot down or too busy evading interception. How well a U.S. carrier task force off Taiwan, even if backed by a handful of F-22 fighters, could defend itself from coordinated attacks by missile-armed Chinese aircraft, submarines and land-based ballistic missiles remains to be seen. Much like the Allies in 1943, the U.S. Navy is aware that the enemy has anti-ship weapons. The problem is that since World War II, the U.S. has had no experience in defending against massed salvoes of ship-killing missiles.

On the other hand, Nazi Germany's smart weapons failed to save Nazi Germany. Chinese anti-ship weapons are an asset, not a panacea. They require adequate command and control, intelligence and surveillance, and sufficient ability to operate in the air and at sea for the launch platforms to survive. Absent those factors, Chinese missiles may turn out to be as strategically ineffective as their German predecessors.

Wonder weapons are powerful. But they cannot work wonders.