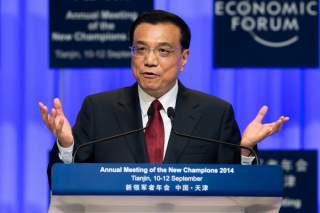 The air in China is so bad that it is impossible to ignore.  It is the first thing one notices upon landing in most Chinese cities when arriving from abroad.  It determines whether or not people are willing to go outside. It is something that is monitored within the country as closely as the weather is in most other parts of the world. As a result, it is always on the minds of most people living in China.  However, in recent days it has once more attracted an international audience due to two specific events.

First, an expose on the issue made by Chai Jing, a well-known Chinese reporter, went viral within the country.

The film condemned the government for failing to protect the lives of its citizens, and generated a great deal of online discussion within China, so much so that it began to attract international media attention as well.  It was titled “Under the Dome” in reference to Stephen King’s novel in which a small Maine town is entrapped by a mysterious, invisible structure that seals everyone and everything inside it.

Such a name rather explicitly suggests then that China’s own “dome” is much less supernatural, and much more of a man-made creation, but is equally imprisoning to those who live under it.  Not surprisingly, given the critical nature of the film, it was, after approximately one week, censored on China’s major Internet portals.

Second, at the end of this year’s just concluded National People’s Congress (China’s parliament) meetings, Premier Li Keqiang announced that his government would redouble its efforts to tackle the country’s environmental problems.  Li’s statement contained an apology for not doing more, and a resolution to improve the situation in China. He want so far as to “declare war” on pollution.

These developments have pushed China’s ongoing environmental crisis onto the headlines of the world’s major media outlets.  Taken together, they suggest that China’s leaders are well aware of how exacerbated their citizens have become with the country’s pollution.  It is, perhaps even more than corruption, the issue that is most troubling to the majority of people living in China.

Evidence of such anxiety is abundant.

For example, air pollution is one of the most frequently heard complaints in Chinese social media sites. Posters have repeatedly taken dark note of the lack of “blue sky (lantian)” days in the country, and added grainy photos of obscured landmarks to document just how bad pollution has become.  Some Chinese netizens even add snarky content to their posts.  Indeed, one particularly viral meme shows famous statues and portraits (even Mao Zedong’s own) wearing masks (kouzhao) to protect themselves from China’s poisoned air.

Yet, dissatisfaction with pollution is not limited to cyberspace alone.  On the contrary, over the last several years it has also led to a spate of real world protests, albeit largely against local officials rather than the Chinese state writ large.  The most notable of such shows of dissent have occurred in Ningbo, Shanxi Province, Kunming, and Guangdong Province.

Some have suggested that the combination of allowing Chai’s documentary to be aired and Li’s statement constitute a clear acknowledgement by the Chinese government of this simmering discontent.  More specifically, such moves may be seen as constituting a shot across the bow of the country’s entrenched economic interests (mainly gas, oil, and coal companies) that are largely responsible for its most obvious pollution problems.

The argument then becomes that now, perhaps for the first time, China’s leaders are getting serious about making the air there more breathable.  However, it is quite premature to celebrate such a shift.

To begin with, this is far from the first time that the country’s leaders have made promises to clean things up.  For example, the same statements were made years ago before the 2008 Beijing Olympics, and Li himself has made similar vows at each of the three previous NPC sessions.  Yet, there has been no noticeable improvement in air quality in China’s cities during this time period.

More broadly, the policy changes required to bring about change would be likely to have immediate costs for the country’s economy at a time when questions are growing about how robust it is, and the benefits would only be felt over a longer period of time among a broad segment of the population.  Siding with the long-term, rather than continuing to defer costs, is not the type of choices that politicians (even ones not facing the prospect of competitive elections) like to make.  It is much easier to simply push things down the road, and bear with the public health concerns that pollution creates.

So, despite the appearance of change, it is likely that China’s residents will have to continue donning facemasks for much of the year in a quixotic effort to breathe cleaner air, rather than actually seeing an improvement in air quality in the country.  The skies in China will continue to be colored grey and brown from the country’s factories and transportation system, and blue sky will remain elusive.