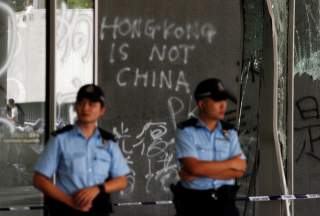 Two weeks have passed since the initial massive street protests in Hong Kong. It was gripping, but such events tend to quickly fade from outside observers’ collective memories. So was this just another gasp as Hong Kong slips further into mainland control? Or maybe something bigger is going on?

Things do look grim for Hong Kongers. Beijing is unlikely to back down—despite a tactical pause. Instead, operating through local Hong Kong officials, it will quietly—and ruthlessly—arrest or even “disappear” protest leaders or harass them.

And the Chinese Communist Party (CCP) is harnessing technology in ways that make Soviet-era KGB surveillance and repression seem quaint.

Public protest terrifies the CCP—and not just demonstrations in Hong Kong. Beijing is desperate to erase memories of the 1989 Tiananmen Square demonstrations and the subsequent massacre of protesters in Beijing. The protesters, who were also out in large numbers in other Chinese cities, only wanted some individual liberty and an honest government in which they had a say.

Not surprisingly, the Chinese Communists have studied the collapse of the Soviet Union to avoid similar mistakes. They have had some success. But what may prove hardest is snuffing out the human desire for “freedom.” Russian president Mikhail Gorbachev—a reformer— couldn’t do it. But Joseph Stalin couldn’t either.

It’s argued, by both the CCP some Westerners, that Western notions of “liberty” don’t suit Chinese people. That’s debatable. In fact, the Hong Kong protests might “rhyme” with events in Eastern Europe in the second half of the twentieth-century.

In 1956, Hungarians revolted in the “Hungarian Uprising” to overthrow a Soviet-controlled government. For several weeks, Hungarian patriots fought Russian tanks. But as was inevitable, the Russians and their local accomplices returned with a vengeance; killing over 2,500 people, arresting upwards of twenty thousand and executing a few hundred, including Prime Minister Imre Nagy. Over two hundred thousand Hungarians fled to the West during the uprising or immediately afterwards.

The thinking—or better said, the “group think”—went like this: People in the Soviet Bloc may not have it great, but Eastern Europe has always been a rough place and they’ve never had democracy anyway.

Moreover, many of those who revolted against the Soviets fled the country. Meanwhile, a younger generation has grown up under the current system. And they only want jazz music records and blue jeans.  They don’t care about politics. They are happy enough with guaranteed jobs, free health care and education, housing and even a little freedom to travel overseas.

And anyway, the regime security services are in control (backed by the Russian KGB) and there’s no chance of anything changing anytime soon.

As for those Poles in the late 1970s Solidarity movement challenging Poland’s communist regime?  What do you expect? They’re wasting their time. It’ll just provoke the Russians. And forget about improved ties with the USSR.

“Détente,” “glasnost,” “perestroika,” “realpolitik”—exotic sounding words suggesting things were as good as they were going to get—were grenades lobbed to silence anyone suggesting Eastern Europe might become free faster than imagined. Such people lived in “fantasyland,” and CIA analysts agreed.

(These days, “Thucydides Trap” is the cudgel against non-believers. There being no alternative to accommodating the PRC—since thermo-nuclear war is the only other option.)

But then one day in 1989, the Iron Curtain cracked and soon collapsed. Furthermore, along with it went the Soviet Empire.

A reporter friend who covered the collapse of the Soviet Bloc in the late 1980s noted about the recent Hong Kong protests:

“It reminds me of the non-violent protests in Leipzig in 1989. Peaceful and fearless in the face of very clear threats by the East German Communist overlords that they would have to have a ‘Chinese solution’ if the protests didn’t stop. In the year of the Tiananmen Square massacres everyone knew what was being suggested.  And they went out in the streets in even greater numbers.  Then the regime blinked.”

“It still makes me pause in wonder at how fast a lie can evaporate.”

“I flew to Berlin for the 20th anniversary of the fall of the Wall (in 2009). That was when many of the leaders from that time were still around. The Germans had set up long lines of 9-foot high blocks of foam covered with canvas that school children from all over Europe had painted up with their ideas for what the world could be like.

The blocks were arranged in long rows following the line of where the Berlin Wall had stood two decades before. On the evening of the anniversary the plan was to tip the blocks over like a chain of giant dominoes, but momentarily stopping the toppling now and then for speeches from different dignitaries.

The first speaker was the former prime minister of Hungary, the person who opened his country’s border in the spring of 1989. He set the anniversary evening’s first dominoes tumbling—as he had in 1989.

At some point the blocks were stopped again and the spotlight and ‘Jumbo-trons’ showed Polish Solidarity leader Lech Walesa.

In my recollection his speech was the best of the entire evening...

I remember that he started his speech by saying something like, ‘The Berlin Wall would never have fallen if it hadn’t been for Solidarity in Poland.’ Then he paused a little bit with just a hint of a wry smile on his face, no doubt knowing that the audience would wonder if he was really audacious enough to take single-handed credit for ending communism in the East Bloc.

Then he continued his speech along these lines: ‘and there would not have been Solidarity in Poland without ‘Prague Spring’ in 1968, and there would have been no Czech uprising without Hungary in 1956, and that would not have happened without the example of the German Worker’s Revolt in East Berlin in 1952,’ (graciously returning the focus back to his German hosts).

He concluded by saying that the imposition of communism in eastern Europe had never truly been accepted by the people it had been inflicted on—all the way back to the beginning.

As for how the movement for greater freedom in Hong Kong will turn out ‘…it’s hard to dominate people who have lost their fear.’”

So is there more to the Hong Kong protests than meets the eye?

Viewed in isolation, maybe not. But over time, one thing sometimes leads to another and in unpredictable ways.

Perhaps Tiananmen Square was the first domino, followed by Taiwan’s transformation from military dictatorship to a thriving free society and democracy. Thus serving as a constant reminder that freedom and consensual government are compatible with Chinese culture.

And the men in Zhongnanhai may have their doubts despite building an Orwellian surveillance state and spending more on internal security than external defense.

China’s elite and powerful have been setting up overseas “bolt holes” to escape to for years—ironically in the world’s free democracies. Perhaps they suspect the desire for freedom on display at Tiananmen Square still burns and won’t be easily extinguished.

Indeed, even Mao Zedong couldn’t do so.

So there are stark object lessons between the Eastern European experience and China under CCP rule. These are the continual desire for freedom, a repressive regime’s increasingly harsh efforts to suppress it, and with diminishing returns.

For the free world’s side, the implication is the need to constantly push against faulty reasoning and flawed “group think.” The Free world must stand up for a higher manifestation of human freedom, no matter the seeming odds.

Grant Newsham is a retired U.S. Marine Officer and is a Senior Research Fellow at the Japan Forum for Strategic Studies.