China Is Furious With Rex Tillerson 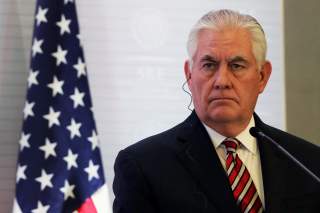 True to form, the Trump administration is keeping all options on the table: even armed intervention in Venezuela, as the president explicitly floated in August. Secretary of State of Rex Tillerson stated his belief over the weekend that there will likely be “a change” in the country.

Asked about the matter Monday night, the State Department refused to rule anything out: “We are considering all economic and diplomatic options to support Venezuela’s return to its constitution,” an official told me. The country is far from that, claim Western sources. One former State Department official describes Venezuelan elections scheduled for April—where all credible opposition has already been excised—as an “open farce.”

Tillerson embarked upon his recent junket in Latin America last week and over the weekend, where he was greeted warmly by Venezuela’s more business-friendly neighbors—most notably, President Mauricio Macri of Argentina, the Columbia University–trained former businessman and first nonradical, non-Peronist leader of his country in a century.

The State Department official highlighted the following remarks from the secretary in a message to me Monday night: “Sanctioning Venezuelan oil or in effect prohibiting the oil to be sold in the United States, or for the United States as well to sell or provide oil to Venezuela, or refined products, is something we continue to consider,” the former Exxon man said in Buenos Aires on February 4. He added: “Our disagreements are with the Venezuelan regime, not the Venezuelan people.”

“Tightening the noose,” Emanuele Ottolenghi of the Foundation of Defense for Democracies, an think tank influential with the Trump administration, messaged me on the development.

But this was met with umbrage not just at Venezuelan president Nicolas Maduro’s palaces in Caracas, but also elsewhere: namely, Beijing.

“Chinese people might be surprised to find out that their country is labeled a ‘new imperial power,” said the nationalist Global Times, a conduit for the Communist Party, in an op-ed. "The question is: What did China do in Latin America? China has no military bases in the region and has dispatched no troops to any of the Latin American countries.”

The Chinese response—strikingly disproportionate, says Eric Farnsworth, a former State official and now vice president at Americas Society and Council of the Americas (AS/COA)—had been prompted by Tillerson.

In addition to entertaining sanctions on Venezuela, a country where illicit Chinese money is stashed according to five current or former U.S. national security officials, the secretary had also slipped in some reverence for the Monroe Doctrine in his recent remarks.

“Clearly…. A success,” the secretary said of the Monroe Doctrine. “As relevant today as it was the day it was written…. Latin America does not need new imperial powers that seek only to benefit their own people….China’s state-led model of development is reminiscent of the past…. It doesn’t have to be this hemisphere’s future.”

China says Tillerson’s remarks demonstrate American “disdain” and “paranoia,” at a time of declining relations between the two countries—300,000 Chinese troops just moved closer to the North Korean border ahead of the Olympics.

“Since 2013, Chinese President Xi Jinping has visited Latin America three times. Tillerson has been in office a year, but this is only his first trip to the region,” the Times writes.

An Imminent Shift from Washington on China and Latin America?

But Xi’s frequent trips to the region are telling, says Farnsworth. China has been interested in economic development in the region for nearly fifteen years, but that the investment has taken a markedly more geopolitical tone since Xi’s rule started in 2012. Recently reelected (by Party leadership), Xi is widely seen as the country’s most authoritarian leader since Mao Zeodong.

“The Chinese foreign minister was just in Chile,” notes Farnsworth. “They’re dangling out just massive investments on infrastructure,” on the East African model, a massive region China has worked to rapidly modernize in recent years, notably building some of the world’s largest railways.

“Washington's anti-China rhetoric is a typical right-wing tone of the Republican Party, which is aggressively against any kind of multilateralism,” says Chinese mainstay Xinhua News, interviewing left-wing Argentinian journalist and professor Pedro Brieger. Strikingly, President Nicolas Maduro has addressed the recent row himself, making clear his loyalties: “U.S. Interventionism in Latin America is unacceptable. We share the Chinese critics and we celebrate its horizontal relationship with our peoples,” he tweeted February 4.

President Trump’s apparent national security ruminations aside, Latin America has not been at the forefront of this White House’s thinking so far.

Barack Obama was arguably even less interested—or wanted an even more understated role—says Farnsworth. But that could all change, if the region becomes an open arena for great-power conflict.

The U.S. National Security Strategy (NSS) paints a picture of a stark return to history, and has the fingerprints of hardliners all over it: “a Peter Navarro powerpoint,” a former senior administration official said of the NSS, name-checking the China hawk Navarro, director of the National Trade Council at the White House.

“China has a low-profile but important physical military presence in Latin America,” argues a report put out by the Strategic Studies Institute. “[China] has expanded the quantity and scope of its military-to-military contacts at the institutional level…. In addition to arms sales and contacts between the [Chinese People’s Liberation Army] and Latin American militaries, select commercial interactions must be considered as part of its military engagement.

Moreover, Russia, the traditional U.S. foil in the region remains, of course, a factor in the region. The Russian foreign ministry announced Tuesday: “Our policy towards Latin America is open, not ideologized, has no closed agenda and is not directed against anyone,” but noted clearly: “We value independence of this region.”