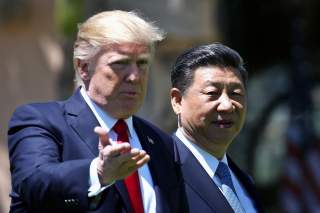 We’re in uncharted waters with China—a good place to be, considering the abysmal track record of past U.S. trade-related interactions with Beijing.

Last month, President Trump made good on his campaign promise to get tough on China over trade disputes, after a long and exhaustive investigation by the U.S. trade representative into China’s theft of U.S. intellectual property. This week, his administration issued a proposed list of Chinese exports that will be subject to additional tariffs of 25 percent. Coming soon will be investment restrictions aimed at stopping China’s theft-by-investment practice of buying and illegally exporting U.S. technology.

The Trump administration took care in methodically selecting the Chinese products to be targeted. Furthermore, the U.S. list is now subject to a period of public review, and likely to shrink somewhat to minimize the impact of tariffs on U.S. industry. China, on the other hand, reacted rashly if predictably, adding levies to U.S. agricultural and aerospace exports.

Many in the media wasted no time in proclaiming a “trade war,” which is the second-best kind of war for selling newspapers. But the reality is that the scope of the measures, some $50 billion on each side, has a negligible impact on the $20 trillion U.S. economy. It’s a much bigger deal for China, which relies on American consumers—and on gutless business executives, who have traded intellectual property for the tantalizing dream of selling to China’s 1.3 billion consumers.

Most likely, what lies ahead is a prolonged period of negotiation with Beijing, as well as a gradual shift of trade and investment emphasis to the broader Indo-Pacific and away from China, whose crony economic model will start to look more and more maxed out.

However, don’t expect negotiations to be smooth. Some analysts are already raising expectations for Chinese president Xi Jinping’s speech next week at the Boao Forum, Beijing’s knockoff version of the annual Davos confab of elite pooh-bahs. But instead of candor or concessions, Xi is all but certain to serve up a combination of defiance and doublespeak about China supposedly replacing America as the global leader in free trade.

Also lacking is any real forum or mechanism to cut a quick deal with China, even if Beijing starts to worry about its irreplaceable need for access to U.S. consumers and technology. Indeed, a major reason we have reached this point with China is that every venue devised to resolve or wish away Chinese trade transgressions has failed.

This is true with initiatives that transcend administrations of both parties in America, including the World Trade Organization, the U.S.-China Joint Commission on Commerce and Trade, the Bush-era Senior Dialogue and the Obama-era Strategic and Economic Dialogue, among others. President Trump also gave the Chinese ample opportunity to negotiate over reform, including a summit early in his administration at Mar-a-Lago that produced no fewer than four dialogue mechanisms—none of which Beijing has taken seriously.

The Trump administration scored a major (and largely unheralded) win in trade talks with South Korea last month, winning big concessions from Seoul in updating the U.S.-Korea Free Trade Agreement. One hopes that China could pull off a similarly rapid about-face, but the odds are slim. While Donald Trump has carefully cultivated a relationship with the Chinese leader, that isn’t comparable to the overlapping economic interests and manifold economic, diplomatic and cultural ties between the U.S. and South Korea that made a relatively quick deal possible.

To compensate, President Trump should engage with Xi directly. Why not meet with Xi and begin direct negotiations? Instead of the laborious and failed norm of negotiating with China, which involves legions of diplomats and experts trying to reconcile effectively irreconcilable positions (albeit with plenty of diplo-tourism), Trump should jump on a plane with his top economic advisor and start talking. The only two people in the world who can reach a successful outcome to this dispute are Donald Trump and Xi Jinping, so why delay a meeting? Summits used to be about leaders making decisions, before they became about pageantry while leaders sign already-negotiated deals. Let’s get back to basics.

Trump can succeed where his predecessors failed. Crucially, as Trump has made clear in other negotiations, he is looking for a real outcome—a change in behavior—not a quick win on paper for the cameras. Trump isn’t doing this for a Nobel Prize, and he’s willing to walk away from a bad deal. Trump’s aides have made it clear that he and his advisors are though accepting empty Chinese promises to change their ways. They don’t intend to let up until they see a change in Chinese conduct. This approach will make negotiations tougher in the short term, but more real in the long term.

America and other countries that play by trade rules and respect intellectual property should win either way. Either China will concede and pave the way for greatly expanded fair trade that benefits all. Or, more likely, Beijing will continue to obfuscate and lie, leading to further defensive measures from Washington and a shift away from trade with our chief adversary. It’s a big world, and China needs us more than we need them.